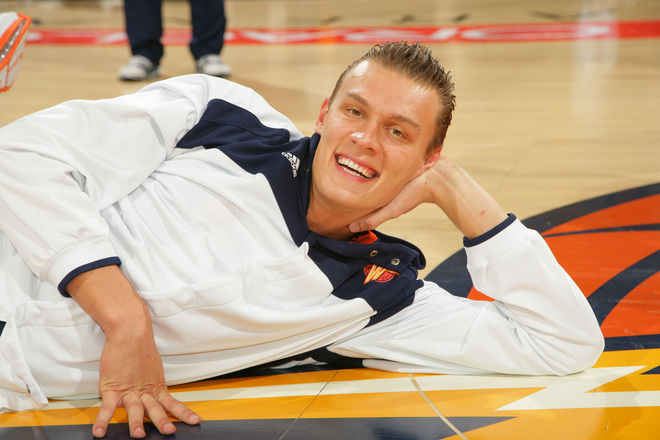 Back in the SLAM Dome today, though I feel about as sharp as Dick Stockton. Too many days traveling, too many mornings waking up early (including a 4:30 a.m. call today — grinding!). I did spend a while yesterday with our next cover subject, and I’ve got to hit the road again tomorrow morning to continue reporting that story. And I’ve been saddled with some other stuff that I can hopefully tell you all about soon. Eventually I’ll be able to get back to writing the Links every day. Eventually.

In the meantime, we got Playoffs, where at least half the series are worth watching. I’m basically throwing a one-man boycott at the East until the Pistons win the Conference, and they will win the Conference, easily. If the Cavs somehow make us all witnesses in the Eastern Conference Finals, Sam is going to shave his head into a Drew Gooden haircut.

• They’re already talking in Jersey about having to break up Kidd/Carter/Jefferson, but here’s a wild guess: Rod Thorn’s not doing anything. He already had the chance to move Kidd at the trade deadline and didn’t, so makes anyone think he’ll make a move now, especially with the team still essentially homeless? These are the Nets, where mediocrity rules. They’ll stick to this team, get Krstic back from injury, talk about how they feel they just needed time to come together, win 44 games next season and lose in the Eastern Conference Semis. New Jersey Nets basketball, everyone!

• Russ will argue this to the death I’m sure, but I still think that Flip Murray’s dunk over Kirk Hinrich was better than Baron’s dunk over Kirilenko. Watch them both again. Flip jumps off one foot from dotted line, barely inside the paint, and nearly goes right over Hinrich. (And Hinrich punches him in the jewels and gets away with it.) Baron’s dunk was ridiculous, too, but he went off two feet and cleared out Kirilenko with his left arm to keep him from blocking the shot. Then he lifts his shirt to show off his…back brace? Just saying.

• Why does Andris Biedrins always look like he just stepped out of a wind tunnel? I know he’s from another country, but someone should tell him that not everybody styles their hair like the kids on “Growing Up Gotti.”

• I like the idea of Marcus Camby on Team USA. I just hope he threatens to hang 50 on the Suns after he gets cut.

• Travel fun: So Friday morning I had an early flight to middle America to attend a photo shoot and interview a guy. The photographer had flown ahead the night before to get everything set up. I was supposed to fly in and land about two hours before the shoot, drive to the location, sit in for the shoot, interview the dude after the shoot, then drive back to the airport and fly home (on a different airline) to Atlanta for the Mother’s Day weekend. I’d actually booked tickets to Atlanta from New York for Friday night before all the photo shoot was set up, and I hadn’t canceled them just in case something wacky happened.

So Friday morning I went to LaGuardia Airport and as I checked in I discovered the flight was delayed due to “required crew relaxation” — apparently the flight’s crew had landed late the night before and it was illegal for them to fly again until a few hours later. I went ahead and checked my bag (had about a week’s worth of clothes on me) and went to the gate. They gave me a $5 voucher good for the Burger King in the airport, like that would make things better.

But they kept delaying the flight, and eventually it got to the point where I couldn’t land at the location until the photo shoot was going to be over. So I called and scheduled some phone time with the guy, then went to the gate to see if I could get my bag off the plane.

ME: Is there any chance this flight is going to leave at the scheduled time?

WOMAN AT COUNTER: No, sir. Sorry.

ME: I understand. And if that’s the case, I’m not going to take the flight and I’ll need to get my bag back from the checked baggage.

WOMAN AT COUNTER: You can’t get your bag back, sir. Once it’s checked you’ll have to get it at your destination.

ME: But my final destination is Atlanta and my bag isn’t checked through to Atlanta.

WOMAN AT COUNTER: Why not?

ME: Because I had a meeting to attend in (OTHER CITY) and I needed my bag in that city. Then I was going to fly from there to Atlanta tonight.

WOMAN AT COUNTER: But if you miss this flight how will you get to Atlanta?

ME: I had already booked another ticket that I hadn’t canceled yet, and it’s a good thing, too.

WOMAN AT COUNTER: Oh. But your bag is going to (OTHER CITY).

ME: So the only way I can get my clothes and all my stuff is if I go to (OTHER CITY), even though I have no reason to go to that city?

ME: Wait, I thought a bag can’t travel on a plane if the person who owns the bag isn’t on the plane.

WOMAN AT COUNTER: That is correct, sir.

ME: OK, well I’m not going to be on that plane, so you can’t send my bag there.

WOMAN AT COUNTER: But you already checked it, sir.

ME: I understand. And now I’m not going on this flight because your airline is running three hours behind schedule and has already caused me to miss the meeting I needed to attend. So I’m leaving this airport and going to work for a few hours and then coming back to this airport and flying to Atlanta to see my family for Mother’s Day. I’d love to take my clothes with me. I am not flying to (OTHER CITY). And you just said my clothes can’t fly there without me.

ANOTHER WOMAN AT COUNTER WHO HAS OVERHEARD ALL THIS: Sir, let me see if I can call down and get your bag.

ORIGINAL WOMAN AT COUNTER: They won’t release it.

SECOND WOMAN AT COUNTER: I just got another bag released. Hang on.

And five minutes later I had my bag in hand and was on my way back to the SLAM Dome.

• Loved Popovich’s response when Craig Sager asked how Manu Ginobili’s eye was: “I just don’t want you to walk in front of him with whatever you have on. It might set him back.”

• I agree that the hard-and-fast rule about getting a suspension for leaving the bench can be a dumb rule. But what I don’t understand is all the people saying that suspending Amare Stoudemire and Boris Diaw is the wrong thing to do. (I love ya Chris Broussard, but I’m throwing you under the bus here.)

Suspending STAT and Diaw is the right thing to do. Why? BECAUSE IT’S THE RULE!

If there’s a fight breaking out, you don’t leave the bench. OK? Got that?

You NBA players like cashing all those checks weighted down with all them zeros at the end? Good. There’s just a few things they ask you not to do. Don’t run up into the stands and punch a bunch of fans. Don’t shoot guns in a strip club parking lot. Don’t smoke pot. And if a fight breaks out, don’t put your sneaker even an inch onto the floor.

These are the rules you’ve been given. Now abide by them. It’s that simple.

• James “Buddha” Edwards and Jerome Kersey as agents? Sign me up!

• Keon Clark is on some ish. Really. This article is incredible. Read it.