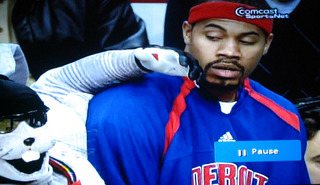 • As much as I’m excited about the Tony Barone regime coming into power down in Memphis, I’m also puzzled by it. They won last night, beating the Lake Show 128-118, and they’ve now won two of their last four games, doing their best to emulate the Suns offense. But they still have the worst record in the NBA, and there’s no way they’re going to make the playoffs this season. So shouldn’t they just play the young guys as much as possible and try to remain in the top of the Draft so they can get Oden or Durant? Rudy Gay is averaging about 23 minutes a night. If they end up playing this way the rest of the year, they’re going to win too many games to be top five and their young guys still won’t have logged any significant minutes.

• Got a press release from the NBA that Kobe has moved into that number one slot on the most popular jerseys list. Not much of a surprise, considering he changed numbers and everyone had to go out and buy number 24 shirts.

• Speaking of shirts…you know all those bootleg shirts of album covers and even some SLAM covers that are so popular? Someone way up higher than us made a smart move and is putting these out there…(I’m intentionally running grainy pics…don’t want to give away everything quite yet.)

You should be able to find them at Finish Line stores and other places soon enough.

• A story with “superstar,” “knockout” and “shocking” in the first paragraph? Must be the Post! I’m kind of inclined to let this whole Kidd divorce story just sneak through the next few weeks, because it’s going to be all over the place. (Can we blame it on Starbucks?) If the Kidds are smart, they’ll realize that as more details emerge, they’ll both look pretty ridiculous and agree to both shut up to the press.

• For the last week I’ve been wondering what is the number of games a player has to play to qualify for the league-ending statistical leaders categories. I was curious about whether Carmelo might miss enough games because of his suspension not to even qualify to lead the League in scoring, because I was pretty sure you have to play in a high number of games to make the final list. And I thought it would be hilarious if Melo missed the cut-off by like one game, because then you’d know Stern was really trying to stick it to Melo.

Thanks to NBA.com’s John Schuhmann, I found this page with the requirements, and sure enough, to qualify among the scoring leaders you have to play in at least 70 games to qualify.

But there’s a built-in loophole that saves Melo here: There’s an alternative point minimum that can also qualify you. It’s 1,400 over the course of the season, or about 17 a game. Melo was average 31 a night when he went out, so he’d build up enough point equity to stay alive in the rankings. And right now, after playing in just 22 games, he’s got 695 points for the season, so he should easily hit the 1,400 plateau once he’s back.

Have you heard the Cavs home announcers? Frank McCloud, the cheap Kevin Harlan homer, and Scott Williams, who sounds like Wolfman Jack. Awful. BTW, what’s up with the patch of hair that starts below headband level on the back of your main man, Drew Gooden’s head? Holla.

Can’t speak on the Cavs announcers because I haven’t heard much of them, but that play-by-play guy is grating. But should we be surprised that a team has homers announcing? I’ve been ranting about that for years here on The Links.

As for Drew, it’s some sort of homage to ’80s haircuts. Drew’s really into the ’80s right now. Not sure why. I’ll email him right now and try to get an official explanation on the haircut.

• Finally, longtime Linkstigator Mr. Dang Dang sent along this photo of Rasheed from a recent game. He apologized for the quality since he took it off his TV, but it’s classic Sheed, really…