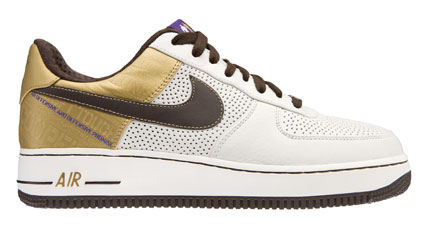 Someone commented on yesterday’s Links post and asked why I hadn’t made any statement about John Amaechi yet. Specifically, reader Tom Jackson (probably not NFL Primetime’s Tom Jackson) wrote…

Strangely silent from SLAM on the John Amaechi front. What’s up with that, Lang? A 6’10” British guy who began flaunting his homosexuality on Jerry Sloan’s watch in SALT LAKE CITY? Where’s the rapier wit?! This is the best story since Handlogoten, maybe better.

I didn’t comment on it because, to me, there’s really nothing worth joking about there. A guy announced that he’s not straight. OK? Everyone good with that?

So why can’t we just move on? Because ESPN wants to make more money off John Amaechi’s sexual orientation.

As Ryan noted, we’d heard this book was coming out a while ago. Fine. Accept the news and move on, right? Not so fast. After every other news site talked about this earlier in the week, ESPN (which is publishing Amaechi’s book) had to wait until yesterday to put the news on the front page of ESPN.com, presumably because they had to align their various networks and companies in order to maximize their publicity for the story.

Last night during that great US/Mexico soccer game on ESPN2, they kept running across the crawl on the bottom of the screen something like: “Former NBA player John Amaechi announces he is gay, making him the first NBA player, active or retired, to announce he is gay.” I’m totally paraphrasing there, but the thing I’m verbatim on is the closer…

“…making him the first NBA player, active or retired, to announce he is gay…”

How ridiculous is that? Sheryl Swoopes already came out, ESPN, so we know basketball players can be gay, too. You don’t have to promote that Amaechi is the first NBA player to publicly admit he’s gay. Isn’t that a little bit like saying: “Lang Whitaker is the first person from his apartment building, currently or formerly, to work at SLAM magazine.” Does it really matter?

We know he played in the NBA, and I’m sure he had a tough experience, but at this point I don’t really care that he was a passable NBA player. In fact, if I was a Jazz fan, I’d probably ticked off that he signed a big contract with the Jazz and then stunk it up for the next two seasons.

But do I care that John Amaechi is gay? Not particularly. And I have a feeling that many of you are had a similar reaction. We’re not living in the 1950s anymore. Many of us have gay family members, gay friends, have known gay people. So to hear that a former NBA player is gay isn’t really a shocker. We hear the news,we process the news, we move on.

Unless, of course, you’re ESPN.

In which case you milk it for every penny it’s worth.

Damn right I watched that US/Mexico match instead of UNC/Duke. I flipped over at halftime and saw back-to-back offensive fouls, so I gave up. I’d rather watch the US thump Mexico again anyway, which is precisely what happened. The US really needs a great striker to emerge, but I’m feeling good about our chances in 2010.

Got a new laptop late yesterday. This one. It’s pretty dope. One good thing is that it’s pretty small, which will make traveling much easier. One bad thing? It’s pretty small, and the type is even smaller. I’m getting old. Maybe I need to go to CVS and get some of them generic magnifying half-glasses or something.

Oh, and I told our friends at Nike that we’d help spread the word on this, although most of you New York sneakerheads are probably well aware by now: The Air Force 1 Original Six Pack and selected pieces from the Air Force 25 Coast-to-Coast pack will be available at 255 Elizabeth St. in NYC starting Saturday at 12:00pm.

QUOTES OF THE DAY
“He has lost all my respect. He insulted me. The first day, he pulled me aside and said, ‘I want you to go away on vacation.’ When we play the Knicks, I cannot look him in the face. F•ck Isiah.” — Dikembe Mutombo, on Isiah Thomas.

THE LINKS…
• Guess which NBA player has a chance to break the record for most 4-point plays in a season? Answer is listed here.

• Haven’t had a chance to read this yet, but SI has a loooong feature on the Knicks and Cablevision boss Jim Dolan. It includes that amazing Mutombo quote above. And Frank “Italian Ice” Isola has his own take on the state of the Garden here. The most amazing thing? Marc Berman can’t stop gushing about Stephon Marbury, who’s playing exactly the same as was a year ago.

• A reporter or something in Toronto is asking Sam Mitchell for forgiveness. I think that’s what’s happening. I’m really confused by this whole article, actually.

• Brrrrrrrrrrr! The Birdman makes an appearance in Denver.

• And Dirk says he is trying to become the Geico caveman.

• Jason Kapono is no Tyrus Thomas.

• Speaking of Ty Thomas, after he was dead honest and admitted that he was only participating the dunk contest for the money, Sam Smith decided to evicerate him in a column. What’s strange is the part where Smith says Thomas was a jerk to “NBA officials” during the days around the NBA Draft. First of all, I’d never met Tyrus Thomas until the NBA Draftees came to New York for the Draft. And I ended up sitting at his table at the Draft media day the entire time, because he was funny and interesting. Talked to him for a while. Liked him enough to come back and install him as the favorite for the Rookie Diary. (We went with Kyle Lowry because we wanted to do a player on a team in the South. Didn’t know he’d be hurt all year. Our first Rookie Dairy curse.) Sam Smith obviously has spent a lot more time around Ty Thomas than I have, but I liked him.

• And is there any question about who the leading candidate for Slam Dunk Champ should be?

• The fans in Indiana aren’t happy with the JailPacers. Even Bob Kravitz has woken up.

• In Sacto, they think Eric Musselman might be too intense. They just figured this out?

• Gilbert Arenas has a new nickname for DeShawn Stevenson: “Second.