The Links: Josh Howard, GINOBILI! and goodbye to PJ Ramos 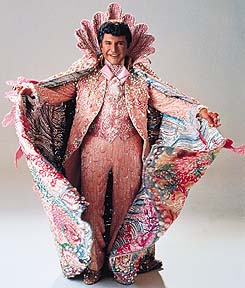 QUOTES OF THE DAY
“Getting a phone call at 6 in the morning is not something I like.” — Larry Bird, on the Pacers’ problems.

“I took a charge (against the Knicks). I didn’t feel nothing last night and then I started practicing and I made some move like I moved my head a little bit.” — Nenad Krstic, attempting to explain his injury.

“He’s got an NBA skill, and it’s a deadly skill. He’s a 4-5 that can shoot two feet behind the 3-point line. He’s a big that can stretch the floor. If you put him on the floor and you run pick-and-roll, that defense has to make an adjustment because of Pittsnogle. That’s an NBA skill that you don’t want to just bypass. But on the other end he really struggles. I mean really struggles.” — Doc Rivers, on Kevin Pittsnogle.

THE LINKS…
• In a shocking move, the Washington Wizards have released Peter John Ramos, the man whose head is so large that a teammate once remarked that the woman who gave him cornrows must have developed carpal tunnel syndrome. Adios, amigo.

• Josh Howard is not happy about the contract the Mas have offered him. Am I the only one who thinks he doesn’t deserve to make as much as Tayshaun?

• The Orlando Magic are getting roasted for paying a political consultant $200,000 not to protest their new arena plans.

• Vince Carter returned to Toronto…and nobody cared. And as good as Marcus Williams has looked, will he get any playing time this season? Nets PR blogger Gary Sussman did give the SLAM crew a shoutout, though.

• The Wizards had trouble waking up for a 10:00 a.m. tipoff. Who wouldn’t? Antawn Jamison actually lost two years in the process.

• Shavlik Randolph says he’s some sort of piano genius. From now on he’ll be known as “Liberace” Randolph.

• Manu GINOBILI! has added a midrange jumper to his game. Warm up the lungs, Chuckster!

• The Clips have offered Chris Kaman a 5-year, $50 million deal. That’s a lot of haircuts.

• Is Kevin Pittsnogle the odd man out in Boston? Meanwhile, Danny Ainge and Luke Jackson are having a little love fest in Boston.

• This is definitely the longest article I’ve ever read about Nazr Mohammed’s hands.

• Odd Injuries: Delonte West had a toenail removed ….. The Raptors mascot fell off a ladder and didn’t return — was listed as a “lower body injury” ….. Derek Fisher bruised his pelvis ….. Bonzi Wells had a root canal ….. Tim Thomas had gum surgery.

• Charlie Villanueva has fouled out of two straight games.