The Links: Ron Ron Is Free, Stephen Jackson Not So Much; Dirk vs. Amare 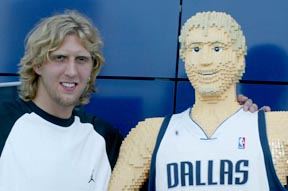 Do you know what cold is? Try waking up and seeing the temperature outside is 9 degrees. And that’s with the sun already out. Or that the wind chill is negative 10. Seriously, it is not a game here today.

QUOTE OF THE DAY
“I’m thrilled. It’s always just a great feeling to be selected as an All-Star as a starter. I’m happy.” — Vince Carter, seconds before figuring out he didn’t actually get selected.

THE LINKS…
• A judge has ruled that Stephen “Whoo!” Jackson violated his parole by shooting up a strip club parking lot and will have to face charges. And way down low in the story, big news: Ron Artest has been released from probation. IF we’d known that S-Jack and ron Ron were going on probation at the same time, would anyone have predicted that Ron Ron would be the guy to get released first?

• Speaking of Ron Artest, our friends at K1X are trying to get Corey “Homicide” Williams into the NBDL All-Star Game. Go here to help them make that happen.

• Now here’s an interesting problem: Since Yao Ming can’t play in the All-Star Game, Western Conference coach Mike D’Antoni gets to pick his replacement. Does he take his own guy, Amare? Or does he take his biggest rival, Dirk Nowitzki? If it was Joe Torre, Bernie Williams would be starting.

• It’s sort of buried here in Gary Sussman’s column, but newest Net Bernard Robinson asked Marv Albert why the Nets were on TNT two nights in a row. B-Rob apparently didn’t understand that Marv announces all the Nets games.

• The Hornets have signed a big deal with 7Up to become the official drink of the Hornets. Shouldn’t they pick a drink with caffeine?

• If AI was still in the East, Gilbert wouldn’t be starting.

• Vince’s defensive lapse left Cat Mobley open to beat the Nets last night, and Li’l Lawrence Frank wasn’t happy. But why was Marcus Williams even in the game, much less guarding Sam Cassell?

• How do we know the Lakers were having practice and not playing a game? Because Sasha Vujacic made an amazing dunk over Lamar Odom and Andrew Bynum, and in actual games he never does anything that exciting.

• Stu Jackson pretends like he knows what he’s doing and shows how refs work.

• The NBA might send the Celtics overseas for training camp. They’d have to at least visit Ireland, right?

• This Kings report card has so many bad grades that it looks like one my own report cards from high school.

Have a great weekend everyone…stay warm!