The Links: The Big Question 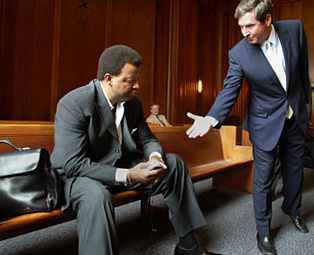 My sleep schedule’s been all screwy this week as I’ve tried to adjust from returning from Europe. So I’ve been falling asleep — out cold — every night around 10:00 p.m., then waking up in the middle of the night for about 3 hours, then falling back asleep in the morning for a few more hours. And the other night I was laying in bed at 4:00 a.m., wide awake, when I thought about an interesting question.

But we’ll get to that at the end of The Links, so you guys have a chance to weigh in.

Last night Sam and I went to a spot in midtown to see all the new stuff EA Sports has coming out over the next few months. But really, we only went because we wanted to play MVP 07 NCAA Baseball, which drops in a few weeks. Sam and I played hours of this game last year, and this year they’ve added analog pitching. Last night was our first chance to play and we immediately each hit home runs in the first inning. I can’t wait for this game to drop.

(They did not have this new cricket game there, but I just stumbled across those shots of it and I’m in. Let’s play the ashes!)

Let’s go through some hoops stuff…

• Rasheed flipped after practice yesterday, shouting expletives at Chris “The Machine” Sheridan from ESPN. The Machine has now had expletives hurled at him by Sheed and Sprewell, which is quite a twosome. Sheridan adds that Sheed pointed a bottle of orange soda at him. The post-practice drink of champions!

(And nice of this dude to crap on The Machine.)

I know an insider out in Indy who I speak with occasionally, and for the last few years he’s told me, over and over, that there was quite a disconnect between the Pacers players and the Pacers fans. That isn’t an isolated occurance — it’s true all over the NBA — but he kept bringing this up each time we spoke. Have the Pacers addressed that disconnect by becoming more white? Well, technically, sure.

Another way of looking at it? They added more guys on their team who’ve never been in brawls, attacked fans or shot guns off in a strip club parking lot.

• Probably worth keeping an eye on the Jazz, where this Kirilenko thing refuses to die down. AK47 has been complaining for weeks that the Jazz don’t utilize him enough early in games. Jerry Sloan has been bristling about it for weeks, but he keeps telling the papers that maybe Andrei’s right, etc. And now Larry Miller’s done gone and got involved, all blustery like he can be. Can’t we all just get along?

• Love Phil Jackson. How can you not like someone who says it was “natural” that Kwame Brown dropped dude’s cake?

• Anyway, enough about all that. The question I alluded to earlier…

I don’t know why I was thinking about this at 4:00 a.m., but for some reason the Hawks came to mind, specifically the way the Hawks are contructed. The Hawks have played 36 games this season, lost about twice as many as they’ve won, and aside from 10-day contracts they’ve made exactly one substantial move (cutting Cedric Bozeman and signing Slava Medvedenko).

Why have they done so little?

The company line will be that the Hawks are building a team from the ground up and they don’t want to get stuck with a bad contract. So they’re going slow, taking their time, letting players develop.

That appears to be an acceptable train of thought. After all, youth is nothing but promise, so if you have a young team (or the youngest team in the NBA, like the Hawks have), you can chalk up a lot of shortcomings to that youth.

Another way to look at it, though, is that maybe the Hawks don’t make any moves because they’re scared. Maybe Hawks GM Billy Knight doesn’t want to try anything too extreme because he’s worried that perhaps he’ll suddenly give fans and the owners proof that he’s not doing a good job. If teams like the Warriors and Pacers are making 8-player deals, then surely there’s ways to get guys to make your team better.

Of course, that’s the pessimistic way to look at it. You could also look at the situation and conclude that being an NBA GM is hard. You’ve got guaranteed contracts, salary caps, luxury taxes, a fixed number of players, only two draft picks each year, an explosion in international ball…lots of variables to account for.

All of this got me thinking about the various pro sports leagues, and I started wondering…in which league is it the hardest to be a GM?

Off the top of my head…

NBA: I just ran through the cons above. The pros are that you’ve got fewer players to deal with than in the NFL or MLB. You can also use the old “we’re young and rebuilding” excuse and people seem to buy it. Chemistry is key.

MLB: This is a gig where it almost totally depends on your owner. If you’re the Red Sox or the Mets, for instance, you just keep throwing money at a problem until you fix it. If you’re the Braves or a team with a budget, you’ve got to be smart and frugal. More players to deal with, plus a huge farm system to manage.

NFL: Hard salary cap, 40-plus contracts to juggle at once, penalties for back-loading deals. Draft picks are crucial. But the huge out here is that the contracts aren’t guaranteed, so you can just dump guys if the deals aren’t working out.

I thought about this for a while, we argued about it in the office, and never really came to a definitive conclusion. So I thought I’d put it out there for you guys to argue about.

In which league is it hardest/easiest to be a general manager?