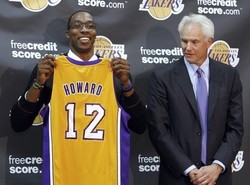 It takes quite a bit for an NBA franchise to remain on top and contend for titles on a regular basis – front-office smarts, good trades, solid draft picks, etc. – but above all, it takes money. Lots of it.

The Los Angeles Lakers generate more revenue than most (if not all) of their rivals, but their operation is getting more costly to run than ever before. Thanks to the newly agreed upon Collective Bargaining Agreement, the Lakers could end up facing a tax bill of some $95 million after this season if they want to keep their core of players together.

In other words, to keep the team intact, the Lakers could be looking at a payroll of nearly $200 million.

“My feeling is that we’ll continue to pursue the top players in the league,” Lakers General Manager Mitch Kupchak said. “There will always be an emphasis on having the franchise be able to survive and prosper.”

This is the last season the Lakers will pay a dollar-for-dollar penalty for exceeding the luxury-tax threshold, meaning that their league-high payroll of $99.2 million will cost them an additional $28.9 million in taxes, because that’s how far they are above the $70.3-million tax level. The tax will raise the tab for their player costs to $128 million. Starting next season, the tax burden gets significantly heavier. NBA teams must pay a $1.50-to-$1 ratio for the first $4.99 million they are over the luxury-tax threshold, a $1.75-to-$1 ratio for being $5 million to $9.99 million above the threshold, a $2.50 ratio for $10 million to $14.99 million over, and a $3.25 ratio for $15 million to $19.99 million beyond the threshold. Teams that are $20 million or more over the tax level accrue additional penalties, increasing by 50 cents per dollar for every $5 million. Those extra pennies can add up to millions, particularly for teams with multiple all-stars.

The Lakers already have $79.6 million committed to eight players for the 2013-14 season. Assuming they re-sign [Dwight] Howard next summer to a maximum contract that calls for him to make $20.5 million in the first year, that bumps the Lakers payroll over $100 million. If their final payroll was $105 million, that would put them $32 million over the league’s projected tax threshold of $73 million, triggering a tax of $94.5 million and putting the team on the hook for a staggering total of $199.5 million — a 55.9% increase over the total for this season with essentially the same group of core players.

There’s no need to feel sorry for the Lakers, of course. They’re certainly not lacking in funds.

The question going forward becomes, Will they be willing to bite the bullet and continue hoarding some of the NBA’s best talent?