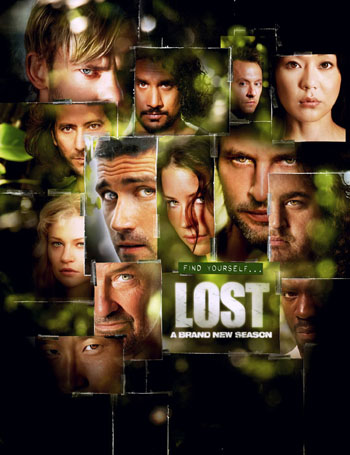 I wanted to put this off until tomorrow morning when there will be no NBA game to discuss. It is a comparison of the characters in LOST to some of today’s NBA players and personalities. I should wait for tomorrow morning, but I fear that everything we know about LOST could change tonight during the season finale. For those of you that do not watch the show, this column will mean absolutely nothing to you. Sorry. You’re really missing out though and you are only hurting yourself. DVDs. Netflix. Get on that.

Your esteemed commenter and linkstigator Max Airington is another LOST/NBA authority, and he was integral to putting this together. He wrote an NBA at the halfway point post using LOST videos on his blog.

And now… the comparisons.

Jack is Kobe. Going beyond the two of them being the focal point of everything for large chunks of time. They trust the wrong woman too much, such as when both of them may have gotten married too young, just for the sake of getting married. Jack had a fling with Bai Ling, who from my understanding is like the Asian Kelly Clarkson. Kobe once had a “fling” with an aspiring American Idol contestant. Allegedly!!! Both Jack and Kobe share a leadership style that is “I AM THE BEST AT WHAT I DO! WHAT ARE YOU GONNA DO WITHOUT ME?!?! SHUT UP I’M THE BOSS!!!” Also, Jack’s dad was a surgeon so he became a surgeon. Kobe’s dad played ball professionally, and so did he. Yes, that is perfect.

Sayid is Tim Duncan. Quiet, intelligent, reflective, with yellowish orange skin. They are both very skilled with mechanical devices and served in the military. The Spurs count as the military. Neither one is afraid to get their hands dirty to win. Tim studied psychology in the classroom while Sayid learned how to torture people with psychological warfare.

Locke is a tough one… but he could be Dwyane Wade. They were both in a wheelchair one day and running around pretty soon after that. They’re always falling down or getting punched or something. Other than that they have no similarities.

I guess Locke could be Phil Jackson. He’s got a unique world view, always seems to know what he’s doing, has experience with psychedelic drugs like whatever he gave Boone in season 1, and walks the line between genius and madness. You could say that Red Auerbach is like Phil’s father, in that he fathered the style of winning the championship every year, and Phil always had a contentious relationship with him.

Sawyer is Stephon Marbury. He is humorous when he speaks, has criminal ties, and a sour demeanor much of the time. Everybody hates him and he loves to be hated, reveling in being the bad guy. I believe Stephon is the one who came up with the nickname “E-City” for Eddy Curry, and there has never been a greater assigner of nicknames than Sawyer. Stephon Marbury sells affordable shoes, Sawyer sells all kinds of inexpensive crap he salvaged.

Charlie is Gilbert Arenas. He’s fun and quirky in a harmless way and people don’t take him too seriously. Until he shoots them in the chest or pretends to kidnap a woman. Charlie was on that H and seems to be unusually creative. Have you read Gilbert’s blog?

Desmond is Ron Artest. He’s just awesome brotha, and he can save your life one minute and kill you the next. He accidentally murdered someone by putting his head through a rock. Who does that? Oh and he did hard time in prison after being court marshalled. That’s kind of like Ron’s suspension for the Malice. Plus he’s obsessed with running away from his responsibilities. Ron Ron! I’m pretty sure both of them have read the collected works of Charles Dickens.

Michael is Ben Wallace. He was treated poorly by his wife, much like Ben was treated poorly by the NBA GMs that wouldn’t draft him. Through perseverance, both of them built nice lives for themselves and you’d think “That’s just a good dude right there.” Ben is fiercely protective of the rim, while Michael is fiercely protective of his son Walt. And then, Ben goes and takes the money to leave his team for their bitterest rival. Michael switches sides and murders a few of his friends just so he can escape.

Mr. Eko is Dikembe Mutombo. Not only because they are both proud African warriors (uh… by that I mean one of them is a basketball player who attended a prestigious American university and the other is a ruthless drug dealing God fearing murderer), but they initiate building projects for the betterment of their communities. Mutombo has his hospital, Eko has the church. Mutombo’s finger wag is sort of like Eko’s bludgeoning club of scripture.

Jin is Yao. I know, I know. That could be seen as racist to assign the only Asian male to Yao. Hey, if every tall white shooter coming out of college is the next Larry Bird and every one of them coming from Europe is the next Dirk Nowitzki, then I can play that game too. Jin is a decent guy who was forced by life’s circumstances into becoming a mobster. Yao was a thoughtful, reserved, thinking man before NBA players taught him how to walk with swagger and grab his stuff and say things like “You can’t (expletive) stop me!” Jin, due to his inability to speak English, has been unable to communicate with anyone on the island and he is dependent on his significant other to help him. Much like Yao needs T-Mac to take the pressure off. So yeah, Sun is T-Mac. He never survives the first round of the playoffs (Adelman!?!) and she will never survive the birth of her child.

Mikhail the one eyed Russian is Andrei Kirilenko. Once again I can defend my choice. Mikhail walked through an electric fence, and he had all kinds of blood and puss coming out of his ears. There should be no coming back from that, yet he lived. Andrei cried in public when Jerry Sloan hurt his feelings, but there was Andrei turning the tide of Utah’s series with Houston.

Kate is Vince Carter. She was once a force of destruction to be reckoned with, capable of blowing up houses with her old man inside, robbing bank vaults, and being so dangerous that a U.S. Marshall needed 5 guns to stop her. She was, if you will, the baddest chick in the game. Now she’s just weepy and soft. (Side note: please forgive me Evangeline!)

Hurley is Shaq. Big and fat and funny and rich beyond our wildest dreams. Hurley won the lottery, Shaq was the prize when the Orlando Magic won the lottery.

Ben is David Stern. He rules the island with an iron fist, and he worships an unseen being known as Jacob. David Stern worships the God of revenue. They both claim that their respective places of business/life are a democracy. Then they bring out that iron fist again. Master manipulators they are.

Claire is Shawn Marion. She flies under the radar and goes unnoticed when overshadowed by the likes of Kate. Then, every once in a while she really gets noticed if you know what I mean! The two of them are always complaining about people not paying enough attention to their basketball skills or their annoying cursed baby.

Juliette is Dirk Nowitzki. She was supposed to be such a revolutionary doctor that she discovered a cure for cancer. They brought her to the island so that she could prevent women from dying, and she has failed repeatedly. Dirk is supposed to be proof that a 7-footer can be a shooter, but he has come up short on the playoff stage. They also both have piercing blue eyes, and a stoic demeanor much of the time.

Those are my comparisons. Of course, there could be some craziness tonight that makes every one of these invalid. But for these few hours before the LOST world changes forever, enjoy.