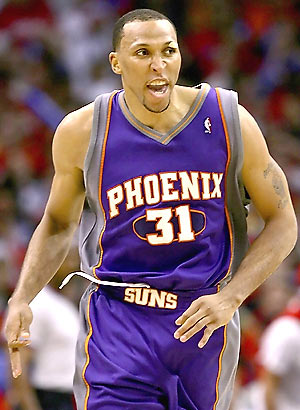 You really have to feel for the Phoenix Suns these days. Well, as much as one can feel for a title contender, a squad boasting three superstar talents, running the most enjoyable offense, and playing half of their games in a city with a spectacular climate.

As you know, not all is peaches and cream in the Valley of the Sun. And the reason for the locker room acrimony is Shawn Marion who, simply, is a bit of a baby. So much so that those who follow the team closely are worried about what Grant Hill’s arrival will do to the Matrix’s fragile psyche. From the East Valley Tribune:

But there is concern among the Suns coaching staff and front office that Marion’s grousing will become even louder if Grant Hill gets some of his shots and publicity.

Lets put things into perspective here: As the newspaper article points out, Shawn Marion is not only the team’s highest paid player, but he took the most shots and played the most minutes last season. In other words, what else does the guy want? A piggy back ride up and down the floor? Perhaps a shoulder rub from Steve Nash during timeouts?

If Marion keeps this up, and with the option to opt out of his contract following the ’07-’08 season, the Suns might be forced back to the negotiating table with teams like Utah.