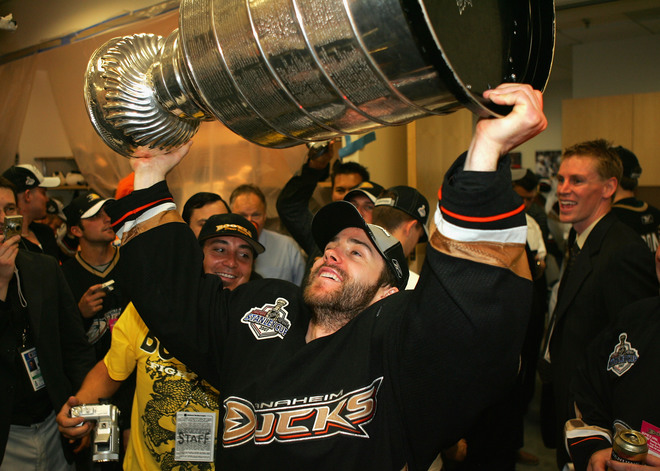 Finals time has arrived. Lang and Ben are on their way down to San Antonio, and our coverage of the NBA championship is about to become extremely thorough. I woke up this morning to find out that Jim Gray is reporting Stan Van Gundy has chosen to take the Magic spot vacated by Billy Dee Wishwash.

Another coach hedgehogging the spotlight at Finals time. But this time it’s Stan, who it’s just impossible to stay mad at. Go get ’em Stan! This is pretty nice for him. He was forced out of Miami after building a lottery team into something just about ready to compete for the chip. Now it is he who swoops in and takes over a young team that at least has a few pieces in place for the future, and money to spend. Good luck Stanley!

And speaking of Stanley… (wow this is a stretch)… it turns out The Mighty Ducks have won the NHL championship, referred to as the Stanley Cup. Now, as someone that knows less than zero about hockey, the natural instinct is to make jokes about how when a franchise based on a fictional team coached by Emilio Estevez is the face of a league, you might have some legitimacy problems. Then again, my favorite team in any sport of all-time is the Cleveland Indians from Major League. I’m excited to go to games 3 and 4 of the NBA Finals (and 5. Maybe) just to be in the same city where Willie Mays Hayes used to operate.

But a hearty congratulations to the Mighty Ducks. They had to… I’m sorry. Just writing the phrase Mighty Ducks made me laugh.

I have been thinking about the NBA Finals more seriously. The trendy thought is to say Spurs in 5, in a series that could mirror the Lakers-Sixers when Iverson shocked an undefeated playoff team in game one, and then there was no competition once the Lakers woke up. Either that, or people are calling for the sweep, which is very possible. The Cavs are not a great basketball team, and you’d think that a team would have to be great to win a professional league championship. Unless you’ve got an intimidating name like The Mighty Ducks. Ah… I’ll stop it hockey. San Antonio has the edge in every possible category you can think of and some you can’t, other than they don’t have LeBron. Although, when Manu isn’t flopping around like a fish on the deck of a rowboat, he has had moments not quite as epic as the 29 of 30, but he’s one of the more money players in the game. A very acceptable counter to LeBron on the offensive end.

A third scenario could be something like we saw when the Pistons stunned the Lakers. Going into that Finals, people were raving about the 4 Hall of Famers from L.A., and how it was ironically their bench player Derek Fisher’s 0.4 shot that would serve as the key moment in their championship drive. Beating Minnesota in the conference Finals was easy, because Flip Saunders was the coach and he has proven himself to be allergic to the NBA Finals. Hey, I’m allergic to pollen and crisp country air. It happens. In the NBA Finals of that year – where game one took place at the same time as the Soprano’s season finale when the feds grabbed Johnny Sack (coincidence?) – L.A. was cocky and overconfident, the Pistons played much harder, and by the time the championship was decided, the Lakers were lucky to have won a single game, when Kobe bailed them out with an OT-forcing three.

Could the Spurs be overconfident? Bruce Bowen has been downplaying his assignment to be the LeBron stopper. You wouldn’t think Popovich would allow his team to go unprepared, but then again it took them six games to beat the Nets team they totally overmatched in the Finals. They did lose game one to Denver this year and choked in game 4 against the Suns, blowing a 10 point lead late in the game before some other stuff happened.

I’m going with the Orlando-Houston scenario though. Cleveland loses a close game as the Spurs show some rust in game 1, but come through with typical San Antonio execution in crunch time. The rest of the series is a coronation for San Antonio as people say “Oh well, LeBron is young and has a bright future. Don’t feel sorry for him. He’ll be back.” Cleveland already has survived a series being down 0-2 against a better team, questioning their leadership’s decision making, and learning their true identity by going through the fire as they say. If it wasn’t the Spurs they were facing, you could make a case that the Cleveland mentality could be “Nothing can stop us now!” but it is the Spurs. Welcome to the machine.

This year’s Spurs aren’t a team for the ages or an unbeatable monster or anything like that. But they are better than the Cavs, and that’s all they need to be.

Happy about that: No

Cheering to be right about this: No

We could see the Disney ending, a la the team that just won the Stanley Cup. In the Disney ending, it is the storyline of LeBron learning that he had the power to win the championship all along, and he carries a rag tag team to victory over the domineering powerhouse. Hey, the Finals are on the Disney networks, so you never know. When you wish upon a LeBroooooooon…

That is all. Big time sitdown lunch meeting today with THE Ben Collins.