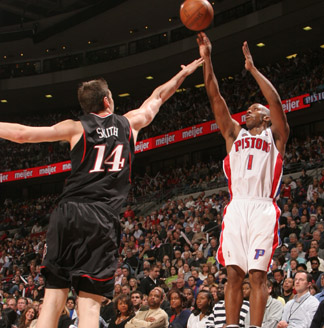 This is the second year in-a-row that I’ve been back home for an extended amount of time during the playoffs. That means I get to catch games with my Pops, which I hadn’t been able to do for close to 10 years. And I’ve noticed some things that weren’t apparent when I was a tyke, staying up late to watch L.A.-Boston with him or when I was a teen rooting against him and the Bulls, no matter what team was playing. I mean, we all have our little game-viewing idiosyncrasies, right? Maybe you switch the channel during free throws or turn off the color when Craig Sager appears. Pops has this frustrating habit that seems like an Old Man tic that he can’t control. Randomly, often at head-scratching junctures, he’ll pronounce that particular game “over.” It could be, say, the middle of the 2nd quarter of a Cavs-Nuggets game, Kenyon Martin might throw down a ferocious dunk to put Denver up 12 and Pops will dramatically throw up his hands and say, “That’s it! It’s over! Cleveland ain’t comin’ back, them boys look atrocious.” A team goes up 8 with 10 minutes left and he’s getting off the couch to go download jazz albums for the rest of the night.

The problem with Pops is not that he does this at all, it’s that he does this so early. But, we all do this at some point, right? There’s usually a point in a game — often later in the second half — when it’s like, “Yeah, Detroit ain’t losin’ tonight” or, “The Suns are done.” And we really see this during the playoffs when the drama increases, the stakes are higher and a pseudo form of destiny appears in each game, especially elimination games. We still have three Round 1 series — compelling ones, too — that need settling and I guarantee you that at some point in the 3rd or 4th quarters, you’ll find yourself saying, “The Wiz got this” or “I think it’s over for Houston” and it’s usually after a subtle play, one that just gives you a feeling. I call these plays The Moments. Sometimes you’re right, other times you’re wrong, but at these Moments you basically assume an outcome based on what’s transpired. I love The Moments — they’re so microcosmic and telling. It’s like when you first heard “Ether” and Nas came on with a “F&%$ Jay-Z,” you sensed that the battle might be a blowout, but when Nas sonned Jigga, admonishing him for his women-hate speech, tying it to Jay’s low self-esteem/insecurities and then hit him with the disciplinary maxim, “Life is harsh. Hug me, don’t reject me”…I mean, that was The Moment, that game was over over. That’s when you knew, right? Well I sensed The Moment in each of the sealed Round 1 series, The Moments when I assumed one team was moving on and the other was about to be Gone Fishin’…here they are — The Moments…

…actually, before we start, let me admit that I couldn’t have cared less about the Orlando-Toronto series and watched, maybe, a cumulative 30 minutes of game action for the whole series. They should have aired that series on Spike or BET…anyways…The Moments…

The Lakers-Nuggets Moment — J.R. Smith Takes And Misses A 1,386-Foot Three-Pointer.
You probably read that and asked, “Well, which one are you talking about?” Touche. I happen to be talking about the unconscionable heave he threw up with 1:55 left in the 4th quarter and the Nuggets down 100-96. When he threw that tragic shot at the hoop I knew that the Nuggets didn’t have the brains to pull out a tough vic. My brother Rek calls them the McNuggets, which may initially seem cheesy, but gave me one of the best laughs of the Spring, because it’s such an appropriate moniker. After all, the squad plays childish and trivial and, ultimately, they only masquerade as a real basketball team, much like McDonald’s masquerades the gray meat in McNuggets as real chicken. Unless you live in Denver, the Nuggets are a team only fit for childish fans and literal teens — dumb kids root for them because they dig ‘Melo and AI. For grown men and real basketball fans, the McNuggets are nauseating. That J.R. Smith Jack summed it all up. Minutes earlier, he threw up a 28-foot trey that made me and my lil’ bro Adam gasp and hold our heads. It happened to go in, but it was one of the most inexplicable shots taken in similar circumstances. It did, however, bring Denver to within two. Right after that, J.R. stole the ball and converted an And-1 to put Denver up one. But it was one of those sequences that made you think, “Either Karl or one of the vets has to reign this dude in before he goes from unhinged to batshizz crazy.” Well, Denver called a T.O. after L.A. went on a mini-spurt to go back up by four. I was hoping someone was gonna collar the young dude up and say, “Yo man, we need good shots. Watch those halfcourt treys your taking.” But then after the Lakers next possession he throws up that 1,386-foot three-pointer and I said what my Pops had already said way back in the first quarter: “It’s over.” That was The Moment. I just felt that there was no way for a squad that allowed that brand of basketball to be played that late in an elimination game could beat L.A.

The Hornets-Mavs Moment — Stackhouse Misses A “Critical” Trey.
I was dead wrong here — in a way. And that’s what happens, sometimes — honestly, often — your Moment Intuition does you wrong. When Stack missed this trey with 6:33 left in the 4th, I thought the game was over. The Hornets were on a 13-4 run to open the quarter, up 84-67 and Stack missed the trey, after Terry missed a trey on the previous possession, which was after a timeout that followed a Pargo layup that succeeded David West blocking Dirk’s turnaround. Dallas just didn’t have it, I thought. Lil’ Chris had gotten going, West was clicking, Pargo was heating up and Dallas couldn’t buy a bucket. Those threes they knock down, ones they needed to knock down, were going in-n-out. But my Moment Radar didn’t foresee that late fourth quarter flurry. And that’s why Stack’s miss really wasn’t a Moment. The way the Mavs charged back nullified Stack’s miss and made it as irrelevant as the jumper he missed early in the 2nd quarter. Like I said, sometimes, when you identify The Moment, you’re prescient, other times your like my Pops, prematurely designating Moments when the game is far from over.

The Spurs-Suns Moment — The Botched Nash-to-Amare.
Over the past four years, Nash and Amare have connected on some of the most dumbfounding assists that I’ve seen in my lifetime. The degree of difficulty on some of their connections was beyond belief, at times, because they always seemed to be in such heavy traffic. Nash would squeeze the ball through a non-existent hole, Amare would scoop it up and convert a “how’d he do that?!” lay-up or dunk or banker. Forget Stockton-to-Malone. Nash-to-Amare was a much more profound hookup. Stockton-to-Malone produced efficient, consistent, methodical plays; Nash-to-Amare dropped our slacked-jaws into our laps on a regular basis. So, when Nash drove baseline, sucked in some Spurs defenders and then shoveled a pass that Amare fumbled, Phoenix was done. The Suns were clawing for life and looked to a tandem that was so often transcendent and they botched a play that, in years past, would have ended in an And-1. That was The Moment. Not to mention that, on the previous Suns possession, Nash got ripped by Rob Horry…Horry!!! Sure enough, after the botched Nash-to-Amare, Parker gets fouled, hit one of two, then Diaw throws and errant pass followed by a mid-range Parker jumper to put the Spurs up 88-85, giving San Antonio just enough room for error.

The Pistons-Sixers Moment — Billups Cans A “Go Home” Trey.
I loved this play, because it gave me hope that the Pistons had, once and for all, regained that Detroit Mojo. The Pistons were sonning Philly all game. The Sixers crowd was silent, there were even a few boos after Iguodala missed a free throw early in the 3rd quarter. By the middle of the 3rd quarter it was clear that Philly had to make a run or their season was over. They needed to ignite the crowd, make Detroit work, get a tech, do something…just get it poppin’. Well, Iguodala sort of sprang to life, as did Miller and — even though Detroit was still scoring fairly regularly — after Miller’s layup made it 61-43, there was a slight sense that, if Philly could get a stop and keep building mo’, they had a chance to make it a game. But the ensuing possession was Vintage Pistons Ball. Every player touched the rock, they zipped it around with purpose totally dizzying the Philly rotation and then, as the shot-clock perilously clicked down to zero, Hamilton swung a pass to Chauncey, who knocked down a baseline trey as the horn went off. Pistons 64, Sixer 43. It was demoralizing. In fact, as Billups jogged up the court, Mo Cheeks simply rubbed his temple and sat down on the bench. That was The Moment. Billups pulled the curtain.

Vincent Thomas is a SLAMonline columnist and SLAM Magazine contributor. He can be reached at [email protected]