The Most Inevitable Divorce Ever? 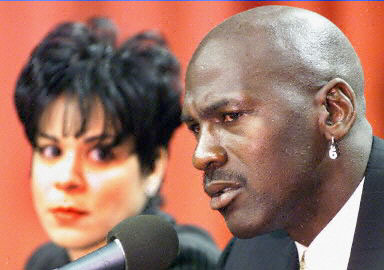 Michael Jordan and his wife, Juanita are apparently divorcing. This only five years after she originally filed, citing the usual “irreconcilable differences.” Guess they weren’t so irreconcilable after all. This time around they mutually agreed to call it quits, which means, among other things, that she’ll be getting a rather large amount of money.

This has been coming for years, of course. When Mike played/worked for the Wizards, Juanita stayed in their palatial Chicago estate. Whenever he was seen at parties/restaurants/bars, it was never with his wife—unless he’s a bigamist with Charles Oakley. (Gonna leave that one alone.) And the stories, oh, the stories. I hope, in my lifetime, that someone is able to write a truly definitive, no-holds-barred Jordan bio. It’s not libel if it’s true!