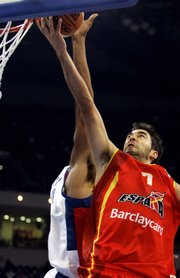 I was flipping through my DVD collection last night when I happened upon the Hardwood Classics series. Since I hadn’t watched the series in quite some time, I decided to pop in a copy of Below The Rim: Little Men of the NBA.

My favorite part of the disk is the vignette on Kenny “Mr Chibbs” Anderson (who Dave Zirin writes about in the latest issue of SLAM). Anderson was, quite simply, one of the most exciting players to ever set foot on the basketball court.

As the DVD shows, he was already a very bad man in high school, and he continued to embarrass defenders (I see you, Bobby Hurley) during his college days at Georgia Tech. It baffles me that so little of his exploits have found their way onto YouTube. The sooner this gets rectified, the better off we’ll all be.

Onto to the news & notes…

-FC Barcelona, Juan Navaro’s Barcelona team, has given the Washington Wizards until next week to either sign their guy or trade him.

-Former NBA player Ron Mercer turned himself in to the cops yesterday to face charges stemming from a strip club fight in April.

Police said Mercer’s friend, 34-year-old Robert Edward Johnson, was also charged with felony aggravated assault for stabbing a bouncer at the club in the same incident.

A fight broke out among the three men and Johnson admitted to police that he stabbed the bouncer in the right side and shoulder with a knife. Battle was not seriously hurt.

Another bouncer, William Beels Jr., was punched in the face by Mercer, police said.

(Don’t you just hate it when you go to a strip joint and end up stabbing a bouncer? Total buzzkill, man.)

-Since no one else was willing to pay him, rumor has it that Mickael Pietrus will return to the Warriors next season.

I’ve heard that Mickael Pietrus, lacking other realistic options, has all but decided to come back to the Warriors this season either for the one-year, $3.4-million qualifying offer or possibly for a two-year deal at about the same terms.

-Milwaukee Bucks owner Sen. Herb Kohl might have an opportunity to work on relations with some influential Chinese delegates in Washington, D.C. today.

-Could the Blazers be up for sale? This article in the NY Sun claims that a Michigan-based group is interested.