The NBA and the media 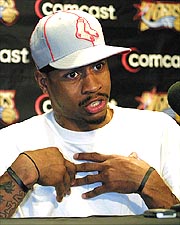 Inspired by Lang’s eye-opening Q&A with Kevin Garnett yesterday, I thought it would be fun to take a trip down memory lane and check out some of the best moments between NBA personalities and the media: