The NBA is about to get better 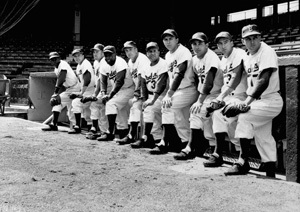 I like to write these types of posts in the morning when it’s quiet and I’ve had time away from the computer to think. The obvious and simple question is where do we go from here? The NBA had a “rogue isolated criminal” factoring into the fairness of games. The one-time face of the NFL is being asked not to bother showing up for training camp because of his alleged savageness. The most sacred record in the baseball record book is about to be broken by a player who is the scapegoated face of one of untold thousands of players who took a shortcut to beef up their stats. Everything is so negative. Being a sports fan these days makes you feel kind of dirty.

On top of all that, I hung out with a die hard Yankee fan friend of mine at a bar last night. We started to talk about the mid 80’s Yankees of Mattingly, Rickey, Winfield, Willie, Pags, and so on. For the first time in my life I really felt like an old timer lamenting about how the game was better back in my day and how all these young whippersnappers with their hundred million dollar contracts don’t respect nothing. I tells ya they don’t respect nothing!

And then, right on cue, the token old man bus driver getting off his shift started talking to us about how he just watched the recent HBO documentary about the Brooklyn Dodgers. The Dodgers leaving Brooklyn was something that happened waaaaaay before I was born, but I can tell you that it truly was a dealbreaker for some of the most loyal sports fans there ever were. Some remained loyal to the Dodgers name, such as your editor in chief Ben Osborne’s dad, but I have memories of my own father telling me the story of the move to L.A. and how many people considered it “The worst thing to happen since Pearl Harbor.”

This has been a long-winded way of saying that bad stuff happens but the game will go on with or without you as a fan. I find myself numb to all the negativity. It seems like every day something comes out that is the most scandalous story ever. The NFL has the inmates running the asylum more than the NBA ever did, with a commish who is attempting to rule with an iron fist moreso than David Stern ever has, and you know what’s going to happen? The NFL is going to set records for attendance, profit, TV viewing, merchandise sales, people playing fantasy, all of that. Major League Baseball is the dirtiest game out. And yet every team is making money, the fans are watching in record numbers, attendance is through the roof, beautiful new ballparks are being built, it’s all good.

So now we come to the NBA. Ratings have been in a free fall for years. There is no player other than Kobe that has any appeal to the non-sports fan who only wants to star gaze. You could go on and on listing all of things that people hate about the NBA, from the perceived selfish style of play, the whining, and oh yeah the terrible officiating.

But there is good news. If everything was “bad”, and now they are forced to face their darkest demons and change things, then once that change takes place, things should become “good” again. Let’s really hope so. It’s still going to exist without you.