The NBA Kindly Asks That You Ignore the Latest Donaghy Bombshell 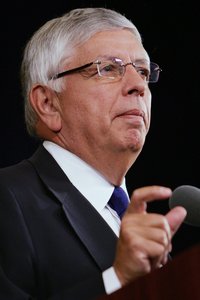 Yesterday, the Fox News website nabbed the biggest NBA-related story of the day, as it reported on phone records showing a suspicious amount of chatter between disgraced ref Tim Donaghy and colleague Scott Foster (134 calls took place between the two in the same time period that Donaghy confessed that he’d been providing info to gamblers.)

Even though it’s becoming increasingly clear that this mess isn’t going to go away anytime soon, the League is stubbornly sticking to its story. From the NY Times:

Foster was interviewed by investigators, according to a statement released by the N.B.A.

“The government had complete access to Tim Donaghy’s phone records and thoroughly investigated this matter, including conducting an interview of referee Scott Foster,” the league said. “The government has said that they have found no evidence of criminal conduct aside from that of Mr. Donaghy.”

Even though the NBA admits that Mr. Foster had been interviewed by the government, the ref says he had no idea that he was being investigated. Hmm.

“Exactly which part of ‘Rogue, Isolated, Criminal’ do you not comprehend?”, David Stern did not necessarily add.