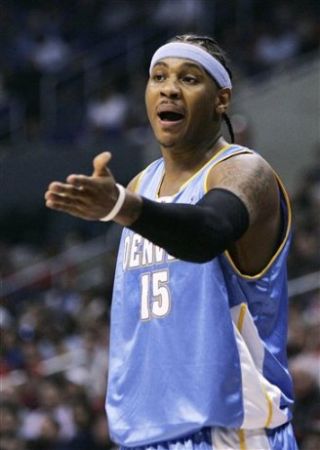 -Lang will have the recap of the David Stern press conference which just concluded. I watched it, and I guess the important thing to take away from the whole thing is that the NBA didn’t find out about the FBI investigation until June 20th, and that Tim Donaghy is the only ref under investigation at this point.

I laughed out loud when Stern called Donaghy a “rogue, isolated criminal.” Wonder if Tim can put that quote on his resume?

(Also, Rachel Nichols embarrassed herself and her employer when she asked Stern to go through “the range of emotions” he felt when the story broke. What, did you want him to say he cried, Rachel? Ugh.)

-Say hello to the new Melo.

“I’m introducing the new Melo. I’m a new person. A new attitude. A businessman now. I’m happy. I probably tell you this every year, but I’m more happy than I’ve ever been. It’s nothing in general. It’s just life, period. I don’t know why. I just woke up one day and felt this way, somehow.”

(I now want a refund on my old Melo.)

-Desmond Mason is back in Milwaukee.

-Interesting story in the NY Times this morning. It appears that during a Warriors/Bulls game, Donaghy tapped Andris Biedrins and told him to get out of the lane instead of calling a three-second violation. Video is available on the website.

(Thanks to Ryan for the tip. Also, I should let you know, Ryan tearfully confessed to me that he often thinks about refs touching players inappropriately. Do what you will with that information.)