The night the Playoffs changed (I hope) 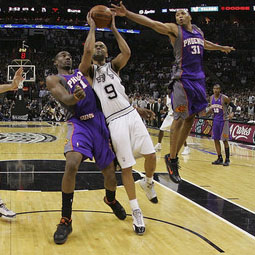 I was in a meeting with SLAM publisher Dennis Page yesterday when I made the following statement: “whoever wins the game tonight will win the title.” And I wasn’t leaving much room for debate as to who that team would be. As Dennis, who likes to focus on the negative, said, “It’s going to be the Spurs. That’s just how it is. We may not want them to win, but they will.” And I was with him. Why would the Spurs slow down now? I wanted the Suns to have a chance, but I was resigned to the fact that the hyper-efficient Spurs would again do what needed to be done.

So after a late departure from work and dinner out, I got comfortable on my couch in the second quarter. The game was so predictable it barely needed to be played. The Suns are too classy to get blown out, but was there any way they were going to win the game? Of course not. The utter predictability continued into the fourth quarter, and I began writing this column in my head. While Russ and some other classicists seems to think it is an affront to real basketball fans if you don’t like the Spurs, I was ready to break down exactly why I think it’s fine to be bored to sleep by them. They’re like, I started writing in my head, the straight-A kids in high school. And who likes them? I certainly didn’t. Straight-A students are technically doing what everyone is supposed to be doing in school—getting there on time, learning, taking notes, communicating with the teachers, diligently completing their homework assignments—and maybe a little of what you’re not supposed to be doing (cheating to get an edge, whining to department heads about grades they don’t agree with) and it is utterly annoying to watch them in action. To me, this is just like the Spurs. They do their homework and show up on time, and they love their teacher (Pop). They also cheat (elbow/forearm/knee) and whine to try and ensure that where their preparation and talent can’t get them, their skills in persuasion will. Throw in their lack of a personable superstar (for the gazillionth time, Tim Duncan is an incredible player and I have enjoyed watching his career. That does not mean I need to root for him to play deep into June for the fourth time) and that irritating “Go Spurs Go!” chant, and to me, rooting against the Spurs makes all the sense in the world.

With the above hypothesis in my head and the game continuing like I expected (Tony Parker FTs put Spurs up seven with less than four minutes to play, circumstances under which they never lose at home), I made the usually fateful move of switching my position on the couch from upright and holding laptop to prone. This is what I do when I no longer care if I nod off, which is my mindset when I’m 99% certain (100% equals right to bed) what the outcome will be. But then, without any real clues (other than Duncan’s foul trouble) that it was coming, the tide turned. Parker missed some shots. Amare and Nash hooked up for some beautiful baskets underneath. Robert Horry lost his cool. Nash iced the game. It was a truly exhilarating final four minutes of play. Where I’d interpreted the 5-10 point leads the Spurs held for almost half the game as the hosts toying with the Suns, in the end the Suns had kept that bulge just small enough that they could make a move at the end. And they did. What’s more, rather than it being a function of their “system,” the Suns (as the great Steve Kerr said as well) got the job done the way the Spurs usually do: with poise and toughness (yet minimal whining).

Of course, those good old refs and their department heads (the NBA office) may just have the last say, what with the debate over Amare leaving the bench, but I’m going to leave that argument to others and pray to God that the NBA uses some decent judgment and lets him play.

For now I’m just hoping last night was the night a new NBA Champion was crowned.