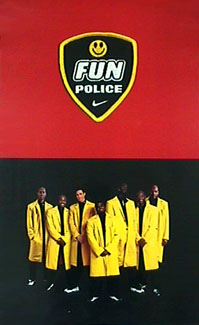 As you may have heard, the NBA is going to be instituting some new rules and enforcing long standing ones this year. The first order of business is dealing with the whiners. The refs are adopting a “zero-tolerance” policy when it comes to post-call histrionics. Naturally, Rasheed Wallace took the new rules a little too personally, angrily calling them “just another ‘Sheed Wallace rule”. Cheer up, Sheed, this is a glorious opportunity to break your own record for most technicals in a season. What’s not to love?

Blazers.com’s Mike Barret shed light on some of the other rule changes in his column a few days ago (via True Hoop):

-Traveling will be called a lot more strictly this season (hear that, Lebron?)

-Thanks to the new ball’s stickiness which allows for greater ease of handle, palming and carrying violations will also be called a lot more tightly this year. (Somewhere, AI silently weeps.)

-Players are no longer allowed to try and gain better position during free throws by grabbing on to one another. (This should be fun to watch.)

-Look for crackdowns on hooking (where the offensive player hooks the defender with his elbow), hand-checking, and forearm checking. The NBA, however, is still totally cool with Shaq’s use of his shoulder as an offensive weapon to clear the path to the basket.

-One new rule I think fans will fully support is the reduction of timeouts at the end of games. Now, teams will only be allowed one full timeout inside the last two minutes of a game. It will still be possible to have three timeouts in the last two minutes, but only one of them may be a full one. For instance, if a team has saved more than one of its six full timeouts (the maximum allowed per game) for crunch time, they will lose them all except for one. The goal here is obviously to reduce the amount of time it takes for games to end. This is terrific. I may even get to bed before 2AM after late games this year. Giddy-up!

Now, this is where things get a little bit crazy…

-Players will no longer be allowed to approach the scorers’ table with their jerseys untucked. Ooooh kay.

-Leg warmers/sleeves are now on the banned substances list.

-Sweatbands will now be worn strictly on the wrist. Dare to wear them anywhere else, and you’ll be getting a call from the League office.

-And just to show that Stern ain’t messing around, rubber bands are also outlawed. Oh man, KG is not going to like this one bit.

I say if you’re going to make these many changes, why not go all the way? I’m proposing these additional rules :

-No more smiling on the court. Ever.

-Should a defender try to apply any sort of defensive pressure on Dwyane Wade, they will be immediately whistled for a foul (wait, that’s nothing new.)

-John Stockton will be named the new VP of on-court fashion.

But on the real, how crazy are some of these rule changes? The hand checking, palming, traveling and hooking enforcement I get and totally agree with; but no more rubber bands? Seriously, sweatbands can only be worn on the wrists? This can’t be real, can it? So, does this mean that retailers such as Foot Locker won’t be carrying those NBA licensed rubber bands anymore, or does that not apply?

Last year, even though I didn’t necessarily agree with the NBA’s decision to implement an off-court dress code, I could at least understand where they were coming from. Sort of. The league had an image problem after The Brawl, and it needed to do something to show that they were working towards fixing it. It was politics. But this, this seems like they’re taking it a bit too far. At this rate, next thing you know, tattoos and braids will be outlawed.