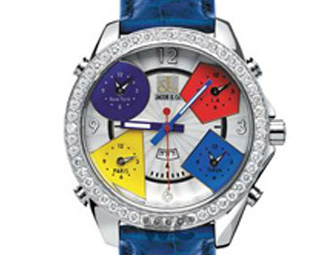 Throughout the season I’m going to empty out my notebook here a few times each week, about whatever NBA action I’ve seen recently. And I’m assuming you guys know the scores of these game when I’m writing this stuff…

• Not sure who with the Heat planned their ring ceremony, but there were some quizzical decisions. Jason Jackson taped video intros for each player, as he stood on a stage wearing a suit with an untucked shirt, which just looked sloppy. And Pat Riley coming out to Rod Stewart’s version of “This Old Heart of Mine?”

• But those rings are frigging huge.

• Watching The Diesel take the court, Wifey asked, Is Shaq ever nervous? I answered probably not, because we’ve seen him act (Kazaam!) and he’s not that good an actor.

• Steve Kerr debuted his new longer hair last night, which is a definite step up. If you’ve got it, flaunt it, right?

• Everyone who picked the Heat to win it all: You realize they had three starters last night who had a combined 43 years of NBA experience? That number will come down when Payton comes out of the starting line-up, but still…that’s a lot of age out there, expecially against running teams.

• The Bulls made a fast 10-1 run, and that was without Big Ben contributing much of anything. I wrote in my notebook “Chicago playing perfect game.” Miami couldn’t get anything going — when they brought in Chris Quinn off the bench — who Kerr noted looked like Jimmy Chitwood — even he immediately turned it over.

• Being able to bring Chris Duhon off the bench is huge for Chicago. Is he perhaps the best back-up point guard in the NBA?

• When will people in Portland start questioning trading away Ty Thomas for LaMarcus Aldridge?

• The Bulls shot 51 pct for the first half. Tell you what: If they keep that up all season, I guarantee they’ll win the title.

• Nap time — I slept through the second half, setting the alarm on my Sidekick3 to wake me up in tome for Suns/Lake Show. When I wake, I see that…I’ve missed nothing at all.

• No Kobe, which is prettu surpising. For a guy who loves to perform on the biggest stages, I’m surprised he’s sitting this one out.

• I’ve been trying to come up with a name for the Suns offense for years, one that will stick and be the defining name for the their style of play (Run and Gun, Sun and Gun, Run and Fun, etc.), and last night it hit me: When they’re rolling and hitting shots and the defenders look exhausted, it’s…The Downhill Offense. Because that’s what it looks like, as they keep running and running and the defenders struggle to get out and defend open shots. Anyone got any better ideas?

• I watched that Lakers preseason game last week and thought Andrew Bynum looked pretty good, although it was against a bunch of scrubs late in the game, so I wasn’t sure if it was him or the competition that was making him look like that. He looked great last night, though — he only played 23 minutes, but he finished with 18 points, 9 rebounds and 5 assists.

• Confession: We asked Bynum to do our rookie diary last season but were turned down by the Lakers, who didn’t want him to have any distractions.

• You could chop off Lamar Odom’s right arm and he could still average 15 a game. Is there another player in the league so one-sided but still effective? My favorite Odom play last night came when he drove to the rim and made a layup and got bumped, and as the ball went through, cutting the Phoenix lead to 16, Odom mouthed “M•therf•cker!”

• Cheryl Miller read a statement from Kobe’s website about his absence. Nice reporting. I mean, I could have done that.

I’m excited about this season.

I can’t wait to play.

The energy of opening night is always special.

We are beginning our journey. We will face many obstacles and challenges, but we will face them TOGETHER AS ONE.

The excitement of tonight was beginning to cloud my judgment of playing, I want to play, BUT I am not there yet. I am rounding 3rd base and will be home SOON.

Big thanks to all you, I love all the support. It helps fuel my drive.

WE WILL STAY IN TOUCH, THIS IS MY HOME.

I don’t know who’s helping Kobe write stuff for his website, but if it was me I think I’d advise him to avoid making references to getting to third base, if you know what I mean.

• Smush Parker is commiting hard to the down-the-middle hair part early in the season.

• Bynum kind of looks like a skinny Oliver Miller.

• The Lakers begin the game doubling Steve Nash off of most picks, which seems like a curious decision. All he wants to do is drive to the rim and then throw it way outside for a three. Wouldn’t it be better to switch the picks, let him drive in and throw it out, and then have defenders out there ready to guard the threes?

• And I love that I’m questioning Phil Jackson.

• The TNT crew shows a graphic of Ernie Johnson looking like Dr. Evil. I was thinking he looks a little like James Carville.

• Someone in the know emails me me to point out that Doug Collins is wearing a Jacob the Jeweler watch. “It was unreal, big-faced, minimum five colors. Think he has different color bands to coordinate his outfits?”

• The Lakers stop that switching screens business, and they pull ahead. Coug Collins stops staring at his watch long enough to point this out.

• Not sure what happened to the new rules about guys not being able to wear leg stockings or braces, or sweatbands and rubber bands. Everyone in this game is completely kitted out.

• The Suns can’t rebound to save their lives, which brings us to Amare Stoudemire. He had a nice dunk right off the bat, but he’s nowhere close to the player he was a few years ago. He just seems lost on the floor, not even looking for his jumper out there.

• After the Lakers storm ahead, they need a key basket late in the game and they run a two-man game between Smush and Bynum…and they score.

• The key question, of course, is what happens when Kobe returns? The Lakers looked great last night, hustling all over the floor, grabbing rebounds, diving for balls, finding the open man. Can Kobe fit into that style, or does he need the ball in his hands to get his?