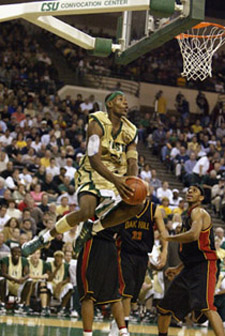 That was then, this is now.

Back then he was a promise, “the next big thing.” Today he is arguably the face of the NBA. Back then he was mentioned as the most hyped player to ever enter the NBA, today he is mentioned in the same breath and category as Kobe, MJ and Magic. People wondered how could he possibly live up to all of that hype. But five years later, he has not only lived up to expectations, he has surpassed them. In SLAM 77, Ryan decided to add LeBron James to “The Players Who Defined our first Decade” list, despite the fact that he hadn’t even completed his first NBA season. For anybody who questioned why he was part of that list in April 2004, you have already been a witness to the answer.—Franklyn Calle

You’re not surprised. It would be a surprise if you were. It’d be almost shocking, in fact, if you weren’t expecting to see this name on this list. This, as stated, is a collection of the 10 players who have in one way or another defined SLAM’s 10-year run. True, he came in on the tail end of our first decade, but he’s the most talked about cat in the game right now—how could he not be on this list?

So you can’t be surprised to see LeBron James here, even if he is only 19 years old, even if he hasn’t yet played a full NBA season, even if he hasn’t yet attained any of the tangible spoils (a ring, a scoring title, an MVP trophy) that the folks in Springfield like to tally when it’s induction time. You could argue that he might not deserve inclusion among a group of players—a group of men, mind you—who have accomplished as much as the rest of the players on this list have, but that argument misses the point. From the moment this kid entered our collective consciousness, it’s been about his promise. No, not “potential,” a word that merely implies possibility, but promise. As in certainty. History tells us there’s no such thing as a can’t-miss kid, but with LeBron, our brightest basketball minds are pretty much in agreement: This one is as close to “can’t-miss” as we’re ever likely to get.

If you’ve been paying attention, you probably know we take a fair amount of credit for announcing LeBron James to the world. Not saying we found the kid under a rock, of course, but unless you were a college coach or recruiting insider or a pretty serious basketball aficionado in Northeast Ohio at the time, you probably hadn’t heard of this kid before the spring of his sophomore year. That’s when we hit him up, taking it upon ourselves to introduce LeBron James to the basketball public at large. A trip to Akron to get a glimpse of the future, to confirm the whispers we’d been hearing. Feature-length attention in SLAM 54, his first national ink, in an article that hit just before the perfect storm of media interest and adidas-and-Nike-inspired insanity began forming above him in the summer of ’01. The Basketball Diary that followed. A cover with Bassy. A solo cover after that. In between, SI and ESPN and almost literally everyone else either got at him or tried. (Who would’ve thought The New Yorker would ever need our help?) But we were there early, earlier then most, and we take pride in that. LeBron seems to appreciate it, too (remember the headband?), but even that’s not the reason he’s here.

So why does LeBron James, just past the midway point of his first NBA season, deserve a spot on this list? Because of the promise—and because of the past that created it. Because he has quite literally changed the game. Only Jordan has had a bigger impact on the way sneaker companies do business. That’s real, no matter how many pairs of Air Zoom Generations he’s sold so far. And he created a new (un)reality in recruiting: by his junior year, the college coaches didn’t really bother anymore, and the few who did usually couldn’t get past the line of hopeful agents. He made high school athletic associations update their by-laws. He inspired allegedly respected national media types to lambaste a kid they hadn’t even met over situations they didn’t even understand. He had David Stern answering questions about a high schooler—by name—during his All-Star Weekend press conference. He had everyone shook, everyone talking, everyone wanting a closer look. And right now, he has talent scouts scouring middle school gyms looking for the next “next,” the next King.

So that’s why. It’s because LeBron was, and is, unprecedented. None like him before—not when you consider the whole saga, the good, bad and ugly of the past few years of his life—and probably none quite like him again.