The Playoffs are set in stone 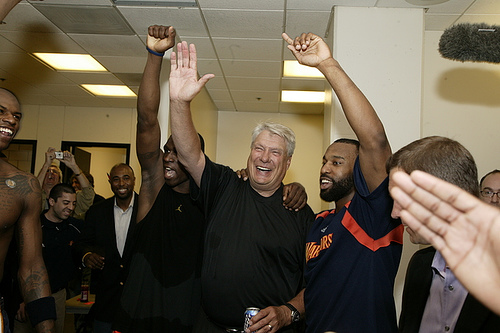 Finally, we know. Rather than dig through last night’s 14 game-28 team garbage time festival, let’s look to the future. Russ has game notes from Nets-Bulls, the Eastern Conference game on which everything was dependent. Out West the Warriors took care of business behind 31 from Stephen Jackson, and the Clippers lost anyway. GOLDEN STATE is back after 13 years.

Slamonline’s coverage of this year’s NBA playoffs is going to be thorough. I am using the powers of delegation to manage our way through the real NBA season, much like a corrupt CEO. Or I could say I’m putting the team first. I will explain more in a few hours once everything on our end is finalized.

Still can’t believe there’s going to be a Nets-Raptors series.