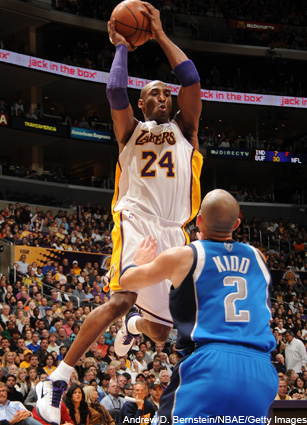 Well, what can I say about weekend games when we’ve got this Washington Wizards drama going on? I don’t really wanna comment on it in here without having the time/space/proper info to really delve into it, but I do want to say that if I could have done anything last night, it would have been to go to Gil’s house and smash his computer for him. I know he doesn’t have an agent, but he’s gotta have friends or someone who can tell him the tweeting isn’t a good idea right now.

I wish it could just be Gilbert Arenas being Gil on Twitter, but with everything else going on… There are still so many unknowns with this situation that we’ll have to see how it all shakes out. It felt weird having just written about Crittenton on his birthday, which was New Years Eve, and then for this story to unfold late that night after Critt has been basically entirely out of the spotlight all season long.

I wish the best for both of these players, and everyone else in the league. I hope it gets sorted out swiftly and soundly.

Now, onto the best story of 2010, so far. On Friday night in Atlanta, exactly one month and/or 14 games since Nate Robinson had gotten off of the bench for the New York Knicks, Mike D’Antoni finally threw him into the game. I don’t think any of us expected what happened next. Somehow, Nate was still totally in game shape, played 38 minutes and scored 41 points, grabbed six rebounds, dished eight assists and had a steal. 11 of his points were in the overtime session where the Hawks were unable to keep up with the Knicks and New York took down Atlanta, thanks to Nate Rob.

The best statement Nate could make was with his game and he punctuated it with an exclamation point. I was happy for him. It was exciting. Hope you saw it!

I also hope you saw Kobe against Sacramento on Friday night. Jesus, Kobe. He was wild with that game-winning three, but how the hell do you leave that man open? Of all players on the court, of all players in the league, you don’t allow Kobe to get breathing room, let alone the time/space the Kings gave with the game on the line in LA without Tyreke Evans in the lineup. The Kings were awesome, but Kobe was simply great.

Allen Iverson helping the Sixers to a victory in Denver last night just felt right. Sure, they were without Chauncey and Carmelo and on the second night of a back to back, but it was still a big victory for Philadelphia and it had to feel good for Allen. Iverson finished with 17 points and seven assists as the Sixers survived a late push by Denver to pull out the victory. The Nuggets lost despite shooting 53 percent from the floor as they shot just 58 percent from the free throw line.

The Bobcats got the 91-88 victory against the Cavs in Cleveland one night after getting another road win in Miami. Back to back road wins was a huge step for a team that had just one win on the road all season long before this weekend. Charlotte was able to grind out the victory and breathe easy after LeBron James missed a game-tying 3-pointer at the buzzer.

Bron had 29/7/6 in the loss. Gerald Wallace scored 19 points to go with 12 boards in the victory for the Bobcats.

Congratulations go out to Chris Bosh for passing Vince Carter and becoming the franchise’s all-time scoring leader last night in a 91-86 victory over the Spurs. Tim Duncan came off of the bench for just the second time in his career, as Gregg Popovich wanted him to rest the first quarter and be fresh for the fourth after he had played extended minutes the night before in a victory against Washington.

With the Spurs unable to make free throws, the Raptors took the W and Bosh was happy to have the win under his belt so he could celebrate his milestone.

I don’t really have words for the Lakers/Dallas game or the New York/Indiana game…. Indy and Dallas didn’t really show up and each lost by a gazillion points. NYK defeated Indiana 132-89 (seriously) and the Lakers took down Dallas 131-96. David Lee had 22 and 16 and our boy Nate came back down to planet Earth, shooting 2-for-11 after his big night in Atlanta.