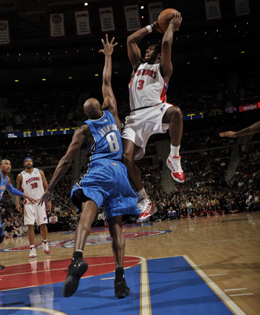 Okay SLAMmer’s. It’s Tuesday morning, my last day in Nova Scotia and last night was spent with my mother, not watching basketball. After pulling out every trick in the book to get in all 12 hours on Christmas Day, there was no way my Mom was allowing me to get away with another NBA-filled night. Not my choice. So, we’ve got some stats and a brief, brief, brief rundown of everything. You guys can fill in the gaps for me.

What did I see/hear:

The Suns managed to take down Oklahoma City 110-102, even with Nash leaving the game with back spasms. This was not fun for my fantasy team since I’m facing the guy who is only 0.5 games back of me, and he has Chris Paul on his squad.

Shaq had 28 points and 12 rebounds in that game to help the Suns grab the W. JRich had 20, he’s really getting comfortable in that Phoenix uni. Barnes had 19 off of the bench.

Westbrook had 31 for the Thunder. Let’s talk about that guy. I like him.

The Hawks took down Denver 109-91, last night as Joe Johnson scored 25 points and dished 7 assists while Al Horford had 16 and 10. A night after scoring 32 at MSG, Carmelo Anthony

struggled from the floor, shooting only 4-17 for the night.

The Magic were leading against the Pistons last night, and I’m not sure what happened. Got a text saying they were collapsing in the fourth and it appears that was correct as they lost 88-82. Detroit was led by Stuckey who had 19 points, despite needing 19 shots to get them.

OJ Mayo versus Kevin Love went into overtime where the Wolves (really!), took over and outscored Memphis 19-9. Mayo finished with 23 points while Love had 17 and the W, but it was Al Jefferson who was the star of the game as he poured in 38 points and pulled down 16 rebounds on the night.

Exciting game of the night: Washington minus Caron taking down Houston, 89-87. Again, I didn’t get to see this one, so fill me in but, wow. Antawn had 30 points, 12 rebounds and 4 blocked shots. Yao Ming scored only 12 points on 4-14 shooting while Ron Artest finished with 20 off of the bench for the Rox in the loss.

Utah grabbed another win last night, this time over Philly, 112-95 with 27 points from Ryne’s guy, Deron Williams. Mehmet Okur scored 19 points and grabbed 10 rebounds while Andrei Kirilenko added 16 points and 13 rebounds. Thaddeus Young did his best to pace the Sixers with 17 points and one pretty highlight as I’ve been told he looked like Jason Williams on the break with a behind the back fake and finish.

And while the Raptors were continuing to fall flat on their faces and make me sad, I got this from Chris O’Leary:
Hump is the man
I know he’s average as hell
but he plays the game the right way
him and bargnani need to room together
so he can teach dr. andrea about being a man

All I’m going to say is you can’t lose when Jose has 21 points and 16 assists and the Warriors give you 5676 thousand chances in the final two minutes to steal the game. Raptors lost to the Warriors, 117-111 thanks to 30 points, 7 rebounds and 7 assists from my guy, Stephen Jax. Marco Belinelli had a great game scoring 23 points and making me cringe every time I saw Andrea Bargnani. Andris Biedrins had 13 points and 15 rebounds. I had one of those “who do I want to win” moments. Oops.

Well guys, I think that’s it. Check Court Surfing later this afternoon for my “Best Of 2008” list and be sure to sound of and let me know your thoughts over there.

I’ll be back in Toronto tomorrow and hitting up the Raptors and Nuggets shootaround and game, hoping and praying that New Years Eve doesn’t bring a bunch of drunk unhappy fans with it. I hate, hate, hate being in an arena that is booing their home team.

I’m going to be happy to jump back into the world of the NBA though.