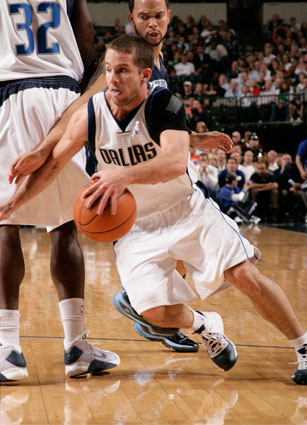 Oh Thursday, with the many games of Wednesday to recap. Seriously, could someone tell me how to make this cold die? It’s not even a cold, just eyes that water, a cough that only arrives at night (when I do most of my work, naturally) and a constant headache above my eyes. Gah. I actually left my keys in my mailbox and then IN the door to my apartment when I went to the grocery store yesterday, how’s that for foolish?

NBATV was airing a special on Shaq last night and it hit me that he was only 24 when he made the jump to the Lakers. At the time, he seemed so much older (probably because I was so much younger… 11, I think?), but he was still a baby. Crazy to think he’s been in the L since ’92. Where has the time gone?!

Happy moment of the night: Hearing the ESPN guys praise Jose Juan Barea. JJB was killing it as the Mavs took down the Jazz with ease, 130-101. 130 points for the Mavs was impressive, especially the 18 from Barea (on 8 shots and accompanying 9 assists), and the 21 from Jason Terry. They are a fun tandem to have coming off of the bench. Dirk had 31 and Josh Howard had 13 points, 8 rebounds and 7 steals. Deron Williams had 18 points and 12 assists Andrei Kirilenko added 17.

There was another 130-101 game last night in the L as the Pacers took down Toronto in Indy. Indiana shot 54% from the floor while Toronto managed only 38% and that was the ballgame. 14 and 11 for TJ Ford who got the W against his former team. Jarrett Jack added 23 points and Danny Granger had 29. The Raps had 21 points and 9 rebounds from Chris Bosh and 16 points from Patrick O’Bryant. I kid you not. You know the season is over when.

21/6/7 for LeBron James as he helped the Cavs take care of business against the Wizards, 98-86 after leading 26-13 at the end of one. Nick Young had 16 for the Wizards. In case you missed it, check out the remake of the Nike Freestyle video from the Wiz.

The Blazers took down the Spurs, 95-83 behond 26 points from Brandon Roy while Tony Parker had 17 and 7  and Roger Mason added 18 for the Spurs who struggled to put points on the board without their star off of the bench. Tim Duncan scored just 4 points in 23 minutes for San Antonio.

The Celtics held on for the 106-104 victory over the Nets, 106-104. Vince Carter threatened the Celtic’s win by cutting a 106-99 lead down to two in the final minute by hitting a three, getting a steal and then nailing a jumper with 50 seconds remaining. While Boston would not score again, NJ didn’t either and the Celtics were victorious. Rajon Rondo finished with 31 points 9 rebounds and 5 assists on 10-15 fgs. Vince finished with 33 points, 12 rebounds and 5 assists for the Nets.

Detroit killed NY 113-86. Russ fed me stories of Sheed’s amazingness all night. Rip didn’t get kicked out. That’s about all you need to know from this one. Oh, Dyess had 16 boards to go with 13 points. Fountain of youth, indeed.

30 points for Joe Johnson as the Hawks took down the Bucks, 113-105. Al Horford had 19 and 9 and Mike Bibby added 22 points and 8 assists. The Bucks were led by Keith Bogans with 22 points and 19 from Richard Jefferson.

The Suns played spoiler against the Hornets, hanging on to take the 105-100 victory. Steve Nash had 23 points and 13 assists Jason Richardson and Shaquille O’Neal added 17 points apiece with 10 rebounds for Shaq as well. The Hornets received 29 points, 16 assists, 7 rebounds from Chris Paul. David West had 29 points and 12 rebounds and Peja Stojakovic added 18 in the loss where the Suns attempted 33 free throw to the Hornets 12.

Carmelo Anthony had 31 points Nene had 23 and 10 and Chauncey Billups added 18 as the Nuggets held on to the two spot in the West by taking down the Thunder 122-112. Kevin Durant scored 31 for the Thunder and Jeff Green added 24.

Okay, enough from me for tonight. I feel like I’ve aged 20 years and suddenly need 6 hours of sleep a night. Yikes!