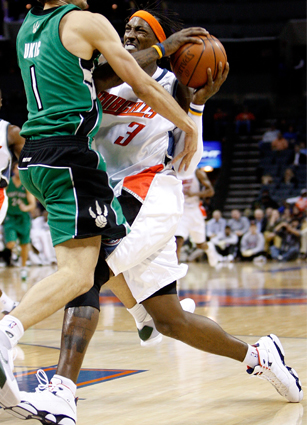 For all of those Raptor fans thinking they were about to witness a strong finish to the season, HA. Feels like April Fools rather than St Patricks day after seeing the 26-point loss to the Bobcats last night to follow the 23-point win against the Pacers. The Raptors were dreadful last night. Not much else to say besides that.

The most painful part was watching Sean May score on us twice in the fourth. Sean. May. Yikes.

Very interesting piece from Doug Smith on Coach Iavaroni coming to Toronto for a little visit. Thoughts on this?

I’d just like to point out, once again, that the Raptors were 8-9 when they let Sam Mitchell go. I still miss his morning shootaround stories.

Surprising sight of the night: Seeing Kenyon and Melo up off of the bench for most of the fourth quarter, cheering their teammates on, on the defensive end in their big win over the Nets.

With the loss, the Nets took a step back in their race for eighth in the Eastern Conference playoff race. The Bobcats inched a step closer, thanks to the Raptors.

Bounce back of the night: The Blazers taking down the Grizzlies after getting pummeled by Joe Johnson and the Hawks on Sunday.

I can’t remember whether or not I wrote about this in yesterday’s Post Up, but Devin Harris went down hard in the Nets loss to the Clippers Sunday night and was on the sidelines, with his arm in a sling last night in the Nets loss to the Nuggets. He will undergo an MRI sometime today to see what the deal is with his shoulder. Way to add insult to injury for NJ. Losing to the Clips after losing your All-Star. Ouch.

While Ron Artest was killing the Rockets in the first half of the game last night, he was able to turn things around at the break and scored all 18 of his points in the second half as the Rockets took down the Hornets. I thought New Orleans had this one under control and it’s yet another game the Rockets showed up for. I’ve been liveblogging this team quite a bit for The Score and they surprise me more often than not with their ability to hang with some of the best teams in the league despite being shorthanded.

Does anyone else have a hard time wrapping their head around the reality that is Tracy McGrady’s current situation? How can he be this broken down? He looked awful in that Adidas/March/Brotherhood commercial that came out last week.

How are your brackets looking, people? I have not started mine yet, but will be trying to make some important decisions tonight regarding who I’m rolling with. By now, you know who my pick to win it all is.

I’m really excited for Thursday. For as long as I’ve remembered, I’ve taken the opening day of Madness off from school (now work, I guess… Eeek), and settled in for a wonderful day of basketball. This year will be no different.

Sad to hear the news of Sean Williams getting arrested in Denver after allegedly throwing a computer monitor in a cell phone store after getting into an argument with a store clerk. Just getting called up from the NBDL recently, I can’t imagine what he was thinking. I’m sure the Nets can’t, either. Disappointing to hear, for sure.

One night after defeating the Indiana Pacers soundly at home, the Raptors went on the road, donned their green uniforms again to face the Bobcats. This time there was no luck of the irish or anything else as Larry Brown’s rapidly improving Bobcats blew out the Raps, 112-86. Charlotte led 57-43 at the half and the Raptors couldn’t catch up in the second, falling behind by as many as 27 as they managed only 14 points in the final quarter. While they gave up 49% shooting to the Bobcats, the Raptors connected on only 38% of their own shots. Charlotte had 32 assists to only 12 turnovers while Toronto had more miscues (23), than assists (17). Gerald Wallace had 25 points, 9 rebounds, 5 assists and 3 blocks for the Bobcats while DJ Augustin had 15 points and 6 assists off of the bench, Raymond Felton added 14 points and 8 assists and Boris Diaw added 13. The Raptors were led by Chris Bosh‘s 18 points and 14 rebounds as Andrea Bargnani scored 13 and Shawn Marion added 12.

Ron Artest had a horrendous shooting night. He went 7-23 from the floor including 0-9 from beyond the arc, but woke up in the second half to score 18 after the break and somehow, the Rockets managed to get a big win against Chris Paul and the Hornets even though they were without Yao Ming. While the game was close in the first half and the Hornets went ahead by as many as 11 early in the third, Houston was able to ring off a 16-2 run that gave them a three-point lead which they were able to sustain as they headed into the fourth up, 67-64. In the final period, the Hornets made their push and went ahead by two, but the Rockets used an 8-0 run get back on top and the Hornets were unable to get stops down the stretch. Luis Scola had 14 points and 12 boards for the Rockets as Aaron Brooks scored 14 and Carl Landry and Von Wafer each added 12 off of the bench. Paul finished with 29 points, 11 assists and 6 steals for the Hornets as David West had 16 points, 13 rebounds and 4 blocked shots in the loss.

I didn’t see this game on my league pass (seriously, am I not getting certain games or am I just blind?), but from the looks of the boxscore, I wasn’t missing much. The Spurs had two quarters where they managed only 13 points. 13. That’s just gross. They had has many turnovers as they did assists (15). They shot just 58% at the free throw line and they somehow managed to lose despite each of their starters having a + while each of the Thunder’s starters had a -. I think I dodged a bullet missing that one. Kevin Durant had 25 points for the Thunder, Thabo Sefolosha had 12 points and Jeff Green added 10. The Spurs were led by Tony Parker’s 28 points while Tim Duncan had 14 points and 12 boards and Matt Bonner added 10.

One night after a surprising victory against the Pistons, the Grizzlies didn’t have enough left over to take down the Blazers. While Memphis had won on Sunday afternoon, the Blazers were coming off of a blowout loss to the Hawks and were ready to right the ship. While the Grizzlies never led in the game, they were able to hang around until the start of the fourth and then their offense died as they were helpless against the Blazers who slowly extended to an 18-point lead, enough to sustain until the final buzzer sounded. LaMarcus Aldridge scored 22 points, Brandon Roy had 20 points, 9 assists and 6 rebounds, Travis Outlaw scored 18 off of the bench and Joel Pryzbilla added 13 points and 13 rebounds. The Grizz were led by OJ Mayo’s 21 points and 6 assists as Hakim Warrick added 15 off of the bench, Mike Conley scored 20 and Rudy Gay added 17 to go with 12 boards.