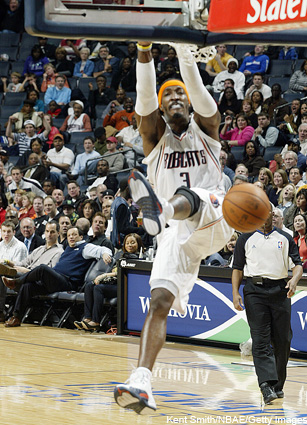 Here I was complaining about there only being two games on Tuesday night and I was struggling to stay awake through all 13 games on the schedule last night. Wow.

Of course, the Raptors/Bucks game took up a chunk of my evening. Know what I hate? Like, positively loathe? When a team wastes a career night from their franchise player. That’s exactly what the Raptors did last night against Milwaukee. Bosh had a career-high 44 and yet, they didn’t go to him nearly enough down the stretch in a close game.

That’s frustrating. Even more so when Andrew Bogut fouled out midway through the fourth.

The Raptors lost 113-107, despite the 44/12/4 performance from Bosh. B. Jennings had 16 points… on 21 shots. Eeek. Also about the Milwaukee game: Jerry Stackhouse checked into the game for the first time, and hit a three, grabbed five rebounds and dished four assists in his 17 minutes off of the bench. He also attempted five shots. He was active in his time on the floor.

On the other end of the efficiency scale, Kevin Durant poured in 31 points on 18 attempts as the Thunder took down the TWolves, 94-92.

This was only one of a handful of games that went down to the wire.

We had a good one in Golden State as the Warriors wanted revenge on the Nuggets after Denver got lucky in Denver earlier this month. With Monta going “Monta” and forcing overtime with a 3-pointer, the overtime was just as entertaining with Monta and JR Smith returning three’s and the Warriors somehow managing to keep it close until the final seconds despite a rag-tag line up of eight players, including D-Leaguers and Devean George.

Gotta give Corey Maggette some love. Dude’s been putting up some big numbers and has had some solid games for the Warriors as they try to get it done through various injuries and different line ups each week.

My goodness, did you all catch that Rondo feed to Rasheed Wallace in Detroit last night? The Pistons got a huge W over Boston, but Rondo’s pass was one that I had to watch about 15 times, smiling each time.

Kevin Durant with the alley oop feed to Russell Westbrook showed why I wish Russell Westbrook was in the dunk contest. He’s good. The Thunder are now six games over .500 and have won more games this season than they did last year.

Thanks to Baron Davis scoring 11 points down the stretch and 23 for the game, the Clippers held on to get the 104-97 victory over the Chicago Bulls. With Baron heating up in the final four minutes, his team needed each of his points as Marcus Camby pulled down 25 rebounds and Chris Kaman worked his way back from a back injury by scoring 20 points. In the loss, Derrick Rose had 23 points, eight rebounds and seven assists for the Bulls who were without John Salmons who missed the game with flu-like symptoms.

31 and 13 from Carlos Boozer, 26 from Andrei Kirilenko and 18 points and 10 assists from Deron Williams allowed the Jazz to defeat the San Antonio Spurs, 105-98. The win gave the Jazz a season sweep over the Spurs and with Tim Duncan being held to 14 points, he currently sits at 19,999 career points, sure to hit the 20k mark in his next game.

In Charlotte, the Bobcats faced the Heat who were on the second day of a back-to-back and wow, did they jump on them from the get go, defeating them, 104-65. Yes, I know. With tired legs, Miami shot just 29 percent for the game and were outrebounded 50-34. While Dorell Wright scored 16 points off of the bench on 6-for-11 shooting, Dwyane Wade scored 16 points, but it took 16 attempts for him to get them.

Jamal Crawford with 20 points off of the bench in a Hawks victory over the Kings. He’s going to win sixth man of the year, right? I mean, he’s got to be the front runner as it stands right now.

The Magic defeated Indiana 109-98 and the stat that stuck out to me the most from this one was Dwight Howard shooting 16-for-24 at the foul line. Those are impressive numbers from the big man. Those are also a lot of free throws to be attempting.

Okay. I’m looking through some boxscores, still. There was a ton of action last night. And tonight, Lakers @ Cavs, the rematch. Let’s hope the Cavaliers fans don’t end up throwing anything onto the court.

Finally, a few words from Sam Dalembert who has returned from Haiti, because he can say it better than I ever could:

“I know I’m not going to save the whole country, but I know deep inside that we need to do more. Maybe we can save some lives, and make others just a little bit better.”