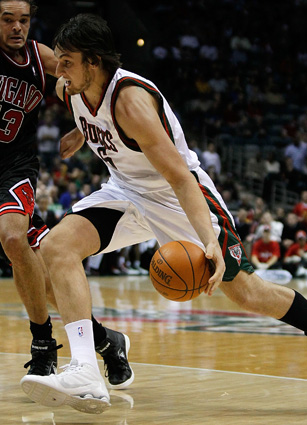 Another day and still I’m falling behind. Being sick really kicks your ass, doesn’t it? Yeesh.

At least the Bucks helped my heart out a little bit. Their win against the Bulls was good for my spirit. Hanging on to get the 99-97 victory, Andrew Bogut was back and I couldn’t stop smiling. Charlie Bell, Ersan Ilyasova, Hakim Warrick, Brandon Jennings. So many guys to love and root for on this team. I’m loving them. Even if they damn near give me heart attacks with these close games down the stretch.

One other thing about that game. I loved absolutely loved the look on Joakim Noah’s face after Brad Miller’s shot was short and the buzzer sounded. No, I’m not taking enjoyment out of his frustration, I’m appreciating his competitiveness and how much it bothers him to drop another game. Is the tide slowing turning on Noah? 16 points and 17 rebounds, he’s busting his butt this season, doing everything he can on both ends of the floor.

Derrick Rose had 19 points and seven assists. I’m convinced this is because I forgot to start him on my fantasy roster.

23 and 15 to go with three steals and four blocked shots for Bogut in his return. Against the Magic especially, they were missing his interior presence so much. It’s going to be interesting to see what Milwaukee can do with both he and Redd back in action.

A close one in Dallas, too, with the Mavs winning by two, 104-102 against the Sixers thanks to a beauty shot by Jason Terry, not Dirkus Circus. If the Sixers had Allen in uniform…. I’m just saying. Trying my best to not get caught up in the convo about Allen Iverson going home where he belongs, but I can’t help it. It just feels, right, doesn’t it?

The game winner from JET was just his third made field goal of the evening.

Did you all realize my guy Jose Juan Barea is averaging almost 24 minutes per game this season? Love that!

Who stayed up to watch the Warriors romp over the Pacers, 126-107. Monta Ellis was on fire, playing 41 minutes and scoring 45 points. He fouled out of the game before he could reach 50 or he would have gotten there.

What prompted the big night?

It’s just so nice to see him healthy again. There’s been so much said about the disaster of a situation in Golden State, Monta himself has said a lot of junk and lost in that mess was the fact that this guy was coming back from a bad injury where we didn’t know if he’d be back to “normal” again.

Monta at normal speed  is about 5x faster than the rest of the world’s  normal and he appears to be there. It was fun watching him race up and down the court last night, particularly that spinning circus layup he hit against Granger… Yeah. Monta, we’re glad you’re good.

Also, Anthony Randolph, please, please get healthy soon. Going down with an ankle sprain that didn’t look good made me feel ill. The injuries will not leave the Warriors alone. Ronny Turiaf left the game limping, after missing time with a sprained knee, also. Get healthy, Warriors.

In Utah, the Memphis Grizzlies reverted back to the Grizz of old, falling hard to the Jazz, 120-93. Allowing Utah to shoot 58% from the floor for the game, the Jazz rolled to the victory, as six players reached double-figures and three topped 20.

I’ve got the Wizards in town today and have to grab some sleep before shootaround. I’ll catch you guys soon.