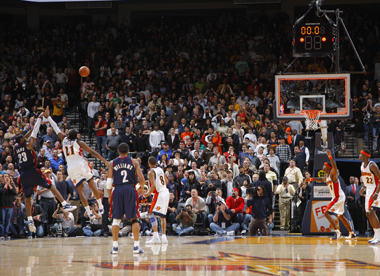 I feel like a kid counting down Christmas only I don’t get to eat a piece of chocolate out of a calendar each morning. Nine more sleeps. Nine more sleeps and my Lakeshow will be here in Toronto. I cannot quite express how excited I am for this to finally arrive.

While I’ve covered the Lakers before, I feel like it’s more real now. I have more experience in an NBA locker room as a member of the media and with half of a season’s worth of Raptors home games under my belt, I feel ready. Ready for Ariza. Sasha. LO. Pau and Andrew (who didn’t make the trip last year). Phil. Kobe. Of course Kobe. My guys will be here soon.

But for now, there are other things to be excited about. Like… The Raptors who are on a two-game winning streak. Okay, okay, it was a pair of wins against the Bulls and Kings, but it sure feels good regardless. It is so much nicer going into a locker room where guys have earned a victory rather than gained another bad loss.

Andrea Bargnani has been fantastic.

The Nuggets are up and down, but they are really good when Nene is on. He was last night. 12-12 from the floor. That’s pretty wild.

A friend of mine decided it would be fun to play a game of NBA trivia on Saturday night as I worked a web updating shift from home. Bless his soul for keeping me amused during the slow period of the shift, but way to make me feel like the geek, playing NBA trivia at 1 a.m. on a Saturday. Yes this is my life. And, I wouldn’t have it any other way. At least not until after I pay my dues of being a rookie in this NBA/media/writing world. Ha. Anyway, one of the questions was most rebounds in a single game.

Quick, without looking, give me a name and the number of rebounds. I’ll give the answer at the end of this post. I had the guy right, but the total blew me away.

Thank goodness the Suns managed to get a win and curb that three-game losing streak. Sorry, Lang, Myung, CoCo & Co. I was actively rooting against your Hawks this time. Loved seeing Joe Johnson do his thing though. 6 steals? I love this season, guys are thefting the ball all over the place. I love it.

You know what I’ve got a love/hate relationship with? LeBron James. Holy. Holy. Holy. What else is there to say about the guy that hits a shot with o.1 tenth of a second on the clock as the ball leaves his hands to destroy those Warriors.

Hold up on the Bron talk for a moment.

Monta Ellis is back. He’s back. He is back. The pull-up three to beat the buzzer at the end of the third was the teaser. The one-handed dunk off of the left foot was the clincher. It felt so good to have him out there, playing the game he loves and looking great while doing so. What a boost he

Anthony Morrow continues to inspire. How was he not even on the radar? He’s a special rookie. So calm, confident, collected. I’m enjoying watching the development of this young guy.

Jax knocked down back to back jumpers over Bron, but none of that matters because people only remember the last shot and Bron made entirely sure that the last shot was his and it was all net. Beautiful ending and while it ripped at my heart just a bit, it also sent a ripple of excitement through my body. When superstar players hit superstar shots, regardless of the superstar, it’s exciting. Just to imagine the energy they’ve got flowing through their body, the rush as the ball leaves their fingertips and they already know it’s good. That is excitement.

LeBron does it as good as anyone. He’s something special.

Lakers/Spurs was the match up of the day yesterday and I missed most of it to get to the arena for the Raptors/Kings matchup. I did liveblog the Boston/Dallas game and let me tell you, trying to make a 30-point blowout exciting is tough. Trying to make it exciting when the 30-point lead is in the first half, that’s impossible.

78 points in the opening 24 for the Celtics. Yup. They are insane when they’re clicking and yesterday they were phenomenal. Rondo had 13/14/7/4, Ray Allen with 23, KG with 23 and House with 23, including seven three-pointers. Although it was painful to watch for the Mavericks (and we saw plenty of shots of Cuban sitting in disgust behind the Mavs bench), it was pretty unreal to see a team rolling like the Celtics.

When do the Lakers and C’s meet again? Can’t wait.

Okay, here we go. The games I did see (or, at least bits and pieces):

*And the answer to the rebounding question was Wilt Chamberlain with a ridiculously disgusting 55 rebounds in one single game.

After a victory in Chicago to snap a nasty losing streak, the Raptors came home looking to continue their luck and keep rolling. They welcomed the 10-35 Sacramento Kings with open arms to the ACC last night. While the Kings started things off on the right foot, shooting 6-9 from three in the first while leading 28-26 at the end of the opening period, they did not stay hot for long. While the Raptors led 56-53 at the half (thanks to 17 points from Chris Bosh), it was the third quarter where they did their damage, outscoring the Kings 31-21 as they went into the final period with an 87-74 lead. The final quarter was not any kinder to the Kings as the Raptor lead was never in doubt. Bosh finished with 31 in the victory as Andrea Bargnani had 24 points, Jose Calderon scored 16 points to go with 8 assists and Jermaine O’Neal added 11 points and 10 rebounds off of the bench. John Salmons scored 21 points for the Kings as Brad Miller had 15 points and Francisco Garcia added 18.

With the Sus struggling, the Hawks had hoped to kick them while they were down and get another victory. Thanks to a 14-point, 13-assist night from Steve Nash, the Suns were able to shake off the losses that had been haunting them from the past week. While the game was close throughout the first three quarters, the combo of Nash and Amare Stoudemire was too much for the Hawks late as the two ran a screen-and-roll to take a four point lead with 26 seconds remaining after Stoudemire finished the play with a free throw to complete the three-point opportunity. Stoudemire finished with 23 points on the night as Shaquille O’Neal had 19 points and 11 rebounds and Leandro Barbosa added 20 off of the bench. The Hawks were led by Josh Smith’s 19 points and 11 rebounds as Marvin Williams added 17 and Joe Johnson added 15 points, 13 assists and 6 steals on the night.

While the Pacers are slowly piecing together some impressive victories, they are also finding themselves in some close games that go down to the wire. The one with the Bobcats last night was no exception as the Pacers lost sight of a 14-point second half lead and needed a boost in the fourth from Danny Granger to hold off the Bobcats. With The Pacers outrebounding Charlotte 52-37, they snagged 19 offensive boards and the extra possessions were needed as the Bobcats cut the deficit to three in the final minutes before Boris Diaw missed two free throws and Gerald Wallace missed a three. Granger finished with 27 points while Troy Murphy continued his strong play with 11 points and 14 rebounds. Mike Dunleavy and TJ Ford each scored 13 points. Raymond Felton had 9 points and 12 assists for the Bobcats as Boris Diaw and Raja Bell scored 18 points apiece in the loss.

While the Nuggets are still without Carmelo Anthony, they are with Nene and this has been a great thing for a Denver squad who is experiencing the ups and downs of playing without their superstar. Last night, the Nene-effect was in full-effect as he dropped in 28 points and 9 rebounds as his team rolled all over the Jazz, 117-97. Not only did Nene drop in 28 points, he finished the game with a perfect stats line, 12-12 from the floor. With Nene scoring 28 points and JR Smith dropping in 13 points in the first quarter alone, the Nuggets led by nine at the half and busted the game open in the third, going ahead by 20. The lead was never in doubt from there. Chauncey Billups had 22 points for the Nuggets and Linas Kleiza added 18 points and 9 rebounds off of the bench. The Jazz were led by Deron Williams 15 points and 10 assists, Ronnie Brewer added 16 points while Mehmet Okur and Paul Millsap each had 12 points and 10 rebounds in the loss.