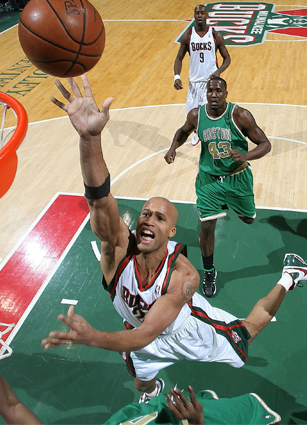 It’s Monday and the tournament bracket is set and we’ve had the NCAA action covered here on the site all weekend.

I had my heart pounded Friday night, when my school, X, lost badly in the CIS playoffs. That one hurt a lot. Particularly for one of my closest friends who was named league MVP of the Atlantic provinces and who has just had such a wonderful season. I wanted this one for him so badly, but it wasn’t meant to be this time around.

Then, Saturday rolls around and it was a wonderful day. Beautiful weather, I was out of the house before 10 a.m., settled into a coffeeshop and transcribing McDyess, Stuckey and Rip. I got through a lot of work, came home and settled in to watch the Syracuse game. And then, things went downhill. I’d guess the majority of the people watching were cheering for Cuse, but all of the well wishes in the world couldn’t stop Louisville from taking over the Orange in the second half of the Big East Tournament.

I’m so proud of the effort Cuse gave and the heart the guys showed. Congratulations go out to Jonny Flynn, on being named tournament MVP, the first MVP on a losing team since 1996.

Now, I know I haven’t spoken about the other tourney’s that went on this weekend and that’s because I didn’t see much of anything besides the BET. I’m sure you can all fill in the blanks though, because, it’s bracket time!

Want to know something that hit me this weekend? I’m pretty certain that Flynn is my favorite college player… Ever. I’m definitely not saying he’s the most talented or promising or even entertaining, but, I’ve always had my guys to watch each season and I cannot recall ever loving one player’s game/heart/focus as much as I do with Flynn. He is just so exciting to me. He’s what college ball is about, in my mind.

Anyway, back to the NBA. By the time I got home from postgame and transcribing with the Raps, I caught the very end of the Lakers/Mavs game (which was a good one), and that’s really all I saw. Ariza with a career-high 26 to help LA hold off the Mavs.

Damn TSN2 covered the Suns/Warriors game so I missed two teams I enjoy, even though the Suns have been cringe-inducing lately.

Caught the end of the NJ/LA Clips game and it was a good one. After Vince Carter appeared to have won the game by knocking down a clutch three-pointer (how many of those has he hit in his career?), on the Clippers final possession of the game, Eric Gordon drove inside, kicked the ball to Baron Davis who found a wide-open (and I mean, wiiiiiiiide-open), Steve Novak in the corner for three. Clippers won the game, 107-105. More importantly than the loss for the Nets, was the loss of Devin Harris in the third quarter after he fell hard on his shoulder.

VC had a monster game with 41 points, 7 rebounds and 6 assists. It was in a loss, but can people really pretend the guy doesn’t have it? He may not be the Vince Carter of old, but he’s still pretty damn good and I’d take him on my team.

What do you think would have happened if Coach Skiles had caught Charlie V twittering at halftime? In case you missed it, Charlie updated his Twitter at the half of the game against the Celtics:

And then updated later that evening saying his twittering didn’t interfere with what was going on in the locker room. I’m sure it didn’t and Charlie was great in the second half, but I still wouldn’t want to see what Skiles would think of that. Great win for the Bucks, though.

Remember when the NBA fined VC for wearing headphones during warmups? I think the next thing to be banned from the L will be twittering. “No twittering on company time”.

POPS! Pops Mensah-Bonsu had a career-high 21 yesterday for the Raptors. He’s just this burst of energy and fight and it is SO good to see that on the court in the ACC again. The crowd was loving him as much as they were loving the victory over the Pacers and his postgame interview was one of my favorite moments of this year.

Weird stat of the day: The Kings are 0-26 against the Eastern Conference this season. Crazy. And, awful. Just awful.

Gotta wrap this up quickly today because I’ve got a ton of stuff due for tomorrow. We’ll be back to recapping in full before you know it. I promise!

Also: Because of his technicals last night, it looks like Stephen Jackson will be missing the Warriors next game.

Be sure to check my Court Surfing blog this week because I’ve got a ton of stuff going up as I finish it.

The Raptors wore a green version of their uniforms yesterday for their  game against the Pacers and they ended up taking down Indiana 110-87. The Pacers fell apart in the third quarter after the Raptors outscored Indiana 37-19 in the period and received a huge boost from Pops Mensah-Bonsu. Pops finished with a career-high 21 points to go along with 8 rebounds as he shot 11-13 from the free throw line. Andrea Bargnani had 27 points and 11 rebounds and Jose Calderon added 15 points to go with 12 assists and 0 turnovers. The Pacers were led by Troy Murphy who had 16 points and 10 rebounds as TJ Ford scored 15 points and Jarrett Jack added 13.

Darko Milicic got a sliver of revenge as he dropped in 12 points and 11 rebounds in the Grizzlies 89-84 victory over the Pistons. The former Pistons draft pick was solid in the victory as the Pistons were outscored 26-16 in the third. Mike Conley scored 20 points and Rudy Gay added 15. Antonio McDyess led the Pistons wth 19 points and 12 rebounds. Kwame Brown had 13 rebounds and 5 steals off of the bench and Rip Hamilton scored 14 points to go with 12 assists, but struggled from the field, shooting just 6-19 from the floor.

In their race for the final playoff spot in the East, the Bucks know how important each game is. After two disappointing losses to the Knicks and Hornets, they knew they couldn’t afford another. Even if the Celtics were in town. Boston helped them out yesterday, shooting only 37% for the game and scoring only 14 points in the fourth as Milwaukee rolled to an 86-77 point victory. In between twittering at halftime, Charlie Villanueva led his team with 19 points while Richard Jefferson scored 17 and Luc Richard Mbah a Moute added 15 points. Kendrick Perkins was the only Celtic to have a strong game finishing with 26 points and 12 rebounds while Paul Pierce scored 15 points and grabbed 11 rebounds.

The Blazers had Rudy Fernandez return to the court yesterday, but were unable to handle the Hawks, falling 98-80, as Joe Johnson had 35 points 7 rebounds and 6 assists. The Blazers had more turnovers (15), than assists (11). In comparison, Atlanta had 19 assists to only 5 turnovers. Josh Smith scored 19 points and Mike Bibby added 15. The Blazers were led by Brandon Roy’s 29 while LaMarcus Aldridge added 19.

Without Dwyane Wade being Superman of the Heat yesterday, his team fell to the Sixers, 85-77. While Miami led early in the fourth, with Wade on the bench the Sixers made an 11-2 run to take the lead. After playing a 3OT game yesterday against the Jazz, the Heat simply didn’t have the energy to compete with Philadelphia and managed only NINE points in the fourth quarter. Andre Igoudala scored 21 points for the Sixers as Thaddeus Young scored 17 and Andre Miller added 10 points to go with 11 assists. Jermaine O’Neal led the Heat offensively with 20 points as Udonis Haslem added 10 points and 11 rebounds and Wade added 18 points.

The Kings lost a close one to the Wizards last night, going down 106-104 as Antawn Jamison again topped 30 points for the Wizards. Washington jumped out to an early lead, scoring 37 points in the first quarter to take an eight point lead after one. The Kings would come back, but what was thought to be a game-tying three-pointer from Francisco Garcia with 3.8 seconds remaining in the game was ruled a two pointer and the Wizards hit a free throw to win the game by two after a three-point attempt from Kevin Martin was off the mark. Andray Blatche had 16 for Washington as Daruis Songaila added 15. Martin had  24 points for the Kings as Spencer Hawes had 20 points and 9 rebounds and Jason Thompson had a 14-point, 14-rebound double-double to go with 4 blocked shots in the loss.

The Magic rolled over the Jazz, 105-87 one day after Utah lost in triple-overtime to the Heat. Led by Dwight Howard’s 28 points and 20 boards, Orlando outrebounded Utah 60-44 as they connected on 11 threes as compared to only one for the Jazz. Rafer Alston scored 16 points to go with 6 assists for the Magic as Anthony Johnson added 14 off of the bench. Carlos Boozer had 23 points and 11 rebounds to lead the Jazz, Deron Williams scored 11 points to go with 9 assists and CJ Miles added 10 as Utah shot only 37% for the game.

Two rebounds shy of another triple-double, LeBron James led the Cavs to another win, this time against the Knicks. Now 3.5 games ahead of Boston in the East, the Cavaliers improved to 29-1 on their home floor this season. James finished with 19 points, 8 boards and 10 assists, adding in 4 steals and 3 blocked shots as Mo Williams added 23 points and Delonte West added 13. The Knicks were led by Al Harrington’s 26 points and 9 rebounds while Nate Robinson scored 20 points to go with 7 assists as he started for Chris Duhon. David Lee had 10 points and 14 rebounds and Larry Hughes added 15 for New York.

Despite losing Stephen Jackson in the third quarter after he decided to talk a little too much, the Warriors scored 130 points. In regulation. They also lost by 24 points. Yes, they were playing the Suns and they lost, 154-130. Giving up 42 points in the first quarter, Golden State allowed the Suns to top that, scoring 46 in the third as the Suns had 40 assists and only 12 turnovers. Jason Richardson scored 31 points for Phoenix as Shaquille O’Neal added 26, Matt Barnes had 20 to go with 11 assists and Leandro Barbosa added 21 off of the bench. Steve Nash had 11 points, 7 rebounds and 9 assists. The Warriors were led by 26 points from Monta Ellis. Corey Maggette scored 21, Kelenna Azubuike added 18 and Jamal Crawford scored 17 in the loss that mathematically eliminated the Warriors from the playoffs.