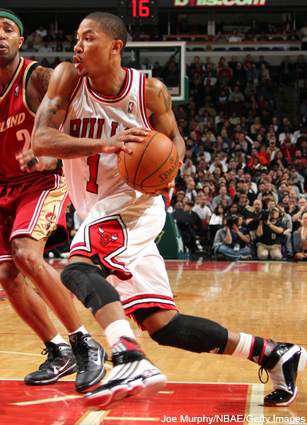 TNT Thursday, starring the LeBron James-less Cleveland Cavaliers and the Kobe Bryant-less Los Angeles Lakers. Oh yeah, home stretch is here, playoffs are around the corner. Wonder how much TNT loved finding out their two marquee players were on the sidelines for the doubleheader? Probably slightly more than I liked finding about Bron was sitting against the Bulls.

It didn’t matter though, because the guys that were in uniform all stepped up and gave us a great Thursday even without Bron and Kobe.

And when Antawn Jamison rolled his ankle in the second half of Cleveland’s one-point loss to the Bulls, anyone who was bitter realized why those guys were sitting out, but dammit if I didn’t hate LeBron sitting affecting the race for eighth between the Raptors and Bulls. Without LeBron, Andy V. showed the world why he shouldn’t be taking jumpshots to finish the game. Airballing his first attempt, he got a second chance and missed again, giving the Bulls the 109-108 victory.

The Bulls got lucky with this one after shooting just 16-for-25 from the foul line, with both Luol Deng and Derrick Rose missed a pair of free throws in the final seconds. After Varejao missed his two jumpers and Rose got the rebound and missed his first free throw, the second miss was batted away as time expired and the Bulls got the win and moved up to tie the Raptors for eighth. Rose finished with 24 points and 10 assists and Noah had a big night with 17 points, 15 rebounds and four blocked shots. The Bulls overcame a hot-shooting night from Mo Williams who scored 35 points and connecting on six 3-pointers to go with his 10 assists.

The Bulls play the Nets tomorrow and then head to Toronto to face the Raptors who own the tiebreaker. They will then finish up their season against Charlotte and Boston.

The Raptors will face Atlanta tomorrow, Chicago on Sunday and then the Pistons and Knicks to close out the regular season. If you forgot, they’ll be without Chris Bosh for all of those games, now. News came out yesterday that Hedo Turkoglu did indeed sustain a non-displaced nasal fracture in the collision with Tony Allen in the Celtics victory on Wednesday night.

In Denver, the Lakers were without Andrew Bynum and then sat Kobe Bryant, but the game was every bit as good as the first, with the Lakers coming back in the third after the Nuggets threatened to pull away when they led by 10 at the half. Holding Denver to just 16 third quarter points, the Lakers went into the fourth ahead by one. The final quarter was close, with Melo putting the Nuggets up three and then Derek Fisher getting the Lakers within one with 32 seconds remaining on . When the Nuggets got the ball back on a controversial out of bounds call (that I still don’t agree with Reggie Miller on), JR Smith hits a free throw and without Kobe, the Lakers went to Fish for the final shot. Down two, he takes a three and is crowded and blocked by Melo.

Carmelo finished with 31 points to lead the Nuggets as JR Smith had 26 points off of the bench as he hit five 3-pointers. Pau Gasol led the Lakers with 26 points, 13 rebounds, five assists and three blocked shots and Ron Artest added 22 points on 7-for-11 field goals. Fisher took the final shot despite shooting just 2-for-11 in the game, and after the final buzzer, it looked as though he was explaining something to Ron. Perhaps, where Ron was supposed to be? Just a guess, we’ll see what the beat guys say, I guess.

Great win, but tough break for Denver as Melo came down funny on the final play and hobbled off of the court. Get well soon, Melo.

In the other game of the night, the Kings rolled to the easy 116-94 victory over the Los Angeles Clippers. Tyreke Evans led the way for the Kings with 28 points, 6 rebounds and 7 assists. He shot 12-19 from the floor as the Kings had six players reach double figures. Sacramento led by 16 at the break and the outcome was never really in doubt, even after the Clippers trimmed the deficit in half in the third thanks to a 16-2 run by the Kings to open the fourth. Jason Thompson had 22 points and 15 rebounds and Carl Landry added 14 points and 10 boards for Sacramento. Eric Gordon had 21 points for the Clippers while Chris Kaman added 23 and Baron Davis put in an 11-point, 10-rebound double-double.