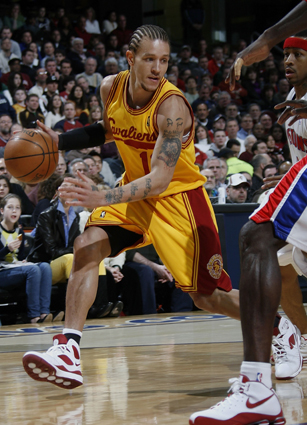 Well now, wasn’t yesterday just a day of blowout victories? Blah, makes the games not as entertaining to watch.

I wasn’t watching much of anything yesterday either, at least not while paying attention. The Knicks were in town to face the Raptors, but I worked until 3 .m. Saturday night and when I woke up Sunday morning, my body was not having it.

I’ve been fighting this silly cold for the past week or so and should have just skipped out on the Cavs game Wednesday, but you know when LeBron comes to town, you show up. Anyway, I ended up spending the better part of yesterday in bed and it almost made me crazy. I watched Syracuse lose by three to Villanova and after getting through that game (and also watching the Raptors show up and take down the Knicks, 111-100), I felt like I’d been through a marathon. Being sick is exhausting.

So is having a last-second three-point attempt that looked good going up, being too strong. I thought Jonny Flynn had that shot for Syracuse for sure. He didn’t.

His game still makes me like him more each time I see him. (and, because that’s only been about four times so far this year, this includes youtube highlights). It helps that The Score is also Flynn-obsessed and we’ve got his dunk highlights all over our NCAA coverage commercials.

So, the Pistons. Wow. I don’t even know where to begin with that team. After outscoring the Pistons 31-17 at the end of one, the Cavs stretched their lead to 67-34 at the half and it was a laugher from there. Unless you were Allen Iverson, getting slammed in the face by the ball after a LeBron dunk. Talk about adding insult to injury. That one hurt.

Delonte West returned for the Cavs last night. Man, did it feel good seeing him out there after 16 games off, with that broken wrist. Postgame, he joined the NBTV crew and he was great. He definitely marches to the beat of his own drum, and I love that about him. 5-5 from the three-point line and he had that wrist wrapped in more ice than you could imagine. Great to see him back on the court where he belongs.

Kobe Bryant passed Elgin Baylor last night to move to 20th on the NBA’s career scoring list. The Lakers also took down the TWolves 111-108. Myles Brown was there and will have more for you from the Target Center.

Can someone explain how the Bucks continue to win without their main guys? I’m impressed. Charlie V may be a little crazy (as shown Friday night when he tried to take down Varejao by his face), but he’s been solid as of late. Ramon Sessions, as well.

Now, LeBron. In less than three minutes during the third quarter, this guy scores 16. Yup, just like that, four three-pointers (a few from about five feet back), sandwiched between two 15-footers to finish with 55 on the night.

And, everyone hating on Rondo? Keep on hating, he’s been brilliant with KG, he was brilliant without him yesterday and I think he will continue to get better and better. Also, you all knowww I love that he had that career-high 32 on his 23rd birthday.

Going back to Friday, we’ve got to talk about the Lakers/Hornets OT game. While the Lakers took it, wow, that was a wild one. I was furious that the refs called the 6th foul on Chris Paul and fouled him out on a play that should have either been a foul on Kobe or a non-call. Bah, I hate bad calls.

Also, Rafer Alston in a nameless jersey made me smile. That was funny.

I do LOVE JVG defending the refs and ripping players for complaining on foul calls. And then apologizing when he gets it wrong, like he did with Matt Barnes yesterday. He is simply the best.

Also, it’s 4:00 a.m. here and it’s snowing. I’ve been living in this city since October and the view from my bedroom window continues to take my breath away.

Anyway, onto the NBA action from yesterday, Dwyane Wade had a career-high 50 points last night. Too bad it wasn’t enough, as his Heat went down 122-99 to the Magic who look pretty nice with Rafer Alston running things. While Alston was in a nameless “emergency” jersey, he wore the number one last night and he finished with 12 points and 9 assists while racking up 7 of those in the first quarter that did the Heat in, with the Magic leading 19-24 after the opening 12 minutes. Wade was brilliant with his 50 coming on 17-30 from the floor and 14-15 from the free throw line. Outside of Wade, Micheal Beasley was the only other player to score in double figures for Miami with 14. Dwight Howard had 32 points and 17 rebounds for the Magic as Hedo Turkogu had 20 points, 9 rebounds and 6 assists and Rashard Lewis added 18.

The Raptors were able to come back from an embarrassing 30-point loss against the Knicks on Friday, to earn a 111-100 victory in front of their fans yesterday afternoon. The combo of Chris Bosh, Andrea Bargnini, Shawn Marion and Jose Calderon was a good one for the Raps and each finished with a double-double to help hold off a Knicks team who kept on fighting until the fnal minutes. Bosh finshed with 11 points and 12 rebounds while Marion added 16 points and 15 boards, Calderon had 13 points and 11 assists and Barnani stole the show with 28 points, 10 rebounds and three blocked shots. Al Harrington had 31 points for the Knicks as David Lee had 17 points to go with 15 rebounds and Nate Robinson added 18 off of the bench.

Despite being without Andrew Bogut, and Michael Redd , the Milwaukee Bucks continue to surprise people and rack up the wins. Last night they were led by a 36-point effort from Charlie Villanueva to take down the Denver Nuggets, 120-117. This was a close one throughout that saw each team putting points on the board with ease. Nine of Charlie V’s points came in the fourth and the Nuggets were unable to contain him as they lost Nene to a knee contusion that saw him leave the arena on crutches. While Carmelo Anthony scored on a layup to bring the Nuggets within 117-115 with 15 seconds remaining, the Bucks hit 3-4 free throws down the stretch to seal the victory. Ramon Sessions had 27 points and assists for the Bucks and Richard Jefferson added 17. Carmelo Anthony had 33 points for the Nuggets as Chauncey Billups had 21 points and Nene added 17 .

The KG-less Celtics were solid against the Suns, stopping their 14 0-point surge and beating them at their own game, 128-103. Rajon Rondo led the way for the Celtics who stretched their lead into the 20’s by the third quarter. Rondo finished with a career-high 32 points on his birthday and he added 10 asssts to go with 6 rebounds. Ray Allen scored 31 on the night and Paul Pierce scored 21. Steve Nash had 19 points and 11 assists, Jason Richardson had 21 points and Leandro Barbosa finished with 18 in the loss.

The Trailblazers slaughtered the Clippers 116-87 last night. While the Clippers shot only 37% for the game, the Blazers connected on 52% of their shots, led by a 28-point, 10-rebound performance from LaMarcus Aldridge and a 17-assist night from Steve Blake. Brandon Roy had 20, 8 and 9 and Travis Outlaw added 15 off of the bench. The Clippers were led by rookies Eric Gordon who scored 21 points and DeAndre Jordan who had 15 points to go with 12 rebounds.

The Pistons continue to sink lower and lower and last night it was at the hands of the Cleveland Cavaliers. Dropping this one 99-78, the Pistons were no match for the Cavs, who had Delonte West back after he had missed 16 games with a broken wrist. The wrist appeared to be okay as West led the Cavs with 25 points, including 5-5 from three-point land. The Pistons came out slow and trailed 67-34 at the half. Bron finished with 20 points and 9 assists and Zydrunas Ilgauskas added 16. The Pistons had a 14-point night from Iverson, 13 points from Walter Herrmann and 11 apiece from Richard Hamilton and Jason Maxiell.

The Rockets rolled over the Bobcats, 99-78 thanks to a decisive third quarter that saw the Rockets outscore Charlotte, 29-14. While the Bobcats shot only 36% from the floor, Houston shot 50% from the floor and hit 13 three-pointers compared to only 4 from the Bobcats. Ron Artest scored 26 points for Houston as Yao Ming added 19 points and Luis Scola added 12 points and 10 rebounds. Emeka Okafor had 13 points and 11 rebounds for Charlotte as Raymond Felton and Boris Diaw each scored 13 points as well.

The Indiana Pacers found a way to win again without Danny Granger and Mike Dunleavy, this time over the Bulls, 98-91.Troy Murphy scored a season-high 27 points for the Pacers to fill the void and they were able to grab the victory depsite a scoring drought that saw them go almost 11 minutes without scoring. In the final quarter, the Bulls managed only 17 points and could not get things to go down the stretch. TJ Ford had 19 points for Indiana and Marquis Daniels added 16. The Bulls were led by Ben Gordon’s 28 points while Tyrus Thomas scored 16 and Luol Deng added 13. Derrick Rose was held to only three points on the night in the loss.