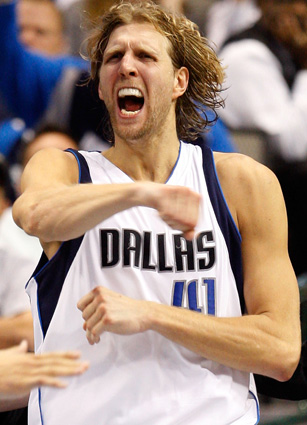 Such a busy night in the NBA and where was my focus? Milwaukee, the same place as most of the NBA people on Twitter. I cannot express in words how exciting it is to see the hype the Bucks now have around them as a team, and the mild hysteria that has erupted around Jennings. It’s fun. With Twitter, we get to watch the evolution from rookie to star-in-waiting, through nine games.

We also got to all panic in unison as he took a Brook Lopez knee to the thigh in the fourth and appeared to be down for the count for a few seconds before shaking it off in a timeout. Whew. The Bucks survived to get another W.

The Nets, well, they survived, but 0-12 is just awful. It’s dreadful. Especially when Chris Douglas-Roberts is exerting his healthy self for 45 minutes, and putting up a career-high of 31 points to go with 10 boards in the loss.

My highlight was Jennings slipping past NJ defenders and getting a dunk in the game. Also postgame when he said that’s probably all you’ll see from him in terms of dunks this season. He had 19 points and eight assists, but he also turned the ball over for every one of those assists.

Just listen to him talk about his 55-point explosion in this interview. The best is when he says, “I love to play basketball. That’s all I really want to do. I’m not worried about the other things that come with it. The main thing is playing basketball getting wins, making my teammates better and making this city want to come back to the Bucks games every night.”

He gets it. He’s 20 years old and he gets it. Gonna be lots more to come from this guy.

Raja Bell playing in Boston for the Warriors last night.

That’s a guy that recognizes the blessing of this game and of his career. For a guy who is supposedly getting surgery TODAY, gritting out a game against the Celtics by playing through pain when a season is not on the line, for teammates he hasn’t really played with that’s respect for the game. That’s why he deserves ours.

He did play for Nellie before, though. Had a jolt from the past hit me, as I  thought about Raja being in Dallas for a season before he went to Utah and became known as a defensive stopper and one I’ll always enjoy.

The Kobe clothesline was hard for me to take, but he acknowledged that he lost his cool on that play. Still as a Lakers supporter, I never thought he’d end up being my go-to NBA guy when people ask who is the easiest to talk to. From that very first NBA preseason game in Vancouver between the Suns and Sonics (RIP, sonics), Raja was just easy.

He’s a guy who loves the game and is thankful to be playing it. I’ve got love for that.

The Raptors played like the Raptors as they lost in Utah. Getting down by 18 in the opening minutes, then cutting it to three at the end of three only to fall apart in the fourth and lose to the Jazz, 104-91. Chris Bosh was fantastic in the loss, scoring 32 points to go with 17 rebounds, but outside of 19 points from Marco Belinelli off of the bench he didn’t get much help. Boozer was huge for Utah, getting 22 points to go with 18 boards, while rookie Eric Maynor added 15.

The Spurs and Mavs had a crazy one in Dallas, but I did not see it because it was an ESPN game that wasn’t picked up here in Canada. Epic fail on my part, and on my country’s part, I know. The Mavs pulled away in overtime and survived Kris Humphries missing a dunk. That I don’t need to see live to picture. Dirk had 41 points and 12 boards while Tim Duncan reminded us all that he’s still got it (even in a losing effort), finishing with 22 points, 14 rebounds, six assists and four blocked shots.

Lots of guys injured in that game with Marion and Parker both out with ankle injures, Dampier missing the game sick and Ginobili going down with a strained groin as well. Get healthy, Mavs/Spurs!

One of the other big games of the night was in Washington, as the Wizards had their guys back healthy and used a strong second half to take down the Cavaliers, 108-91. LeBron had 34 points and nine assists, but the Wizards had Earl Boykins, and he was great in the final quarter. Boykins finished with nine points but he was all over the floor as Antawn Jamison scored 31 points to go with 10 rebounds.

And the Hawks continue to win. Al Horford makes me smile when he runs the break. What are you thinking about this team? I keep waiting for them to stumble (sorry, Hawks fans), but they don’t. It’s been impressive. 10-2 looks mightly fine in ATL.

Looks like Stephen Jackson is feeling comfortable with his new teammates. Playing 45 minutes, scoring 26 points and taking 21 shots, Jax doesn’t need time to get acclimated, I guess. Bobcats still lost by two to the 76ers, though.

I’d just like to see more of Mr. Holiday, please.

Andre Miller with 10 points and 11 assists in a Blazers victory over the Pistons.

Rashard Lewis bounced back from a bit of a rough seaon debut by pouring in 17 points, 10 rebounds, nine assists and two steals for the Magic and they dominated OKC from start to finish. My fantasy team was smiling all around last night.

Can someone answer this: Is B. Roy really 6-foot-6?

And finally, its time to welcome back both Jamaal Tinsley and Eddy Curry. Both made their season debuts last night. I cannot say enough about how great –and young!– Curry looks. Glad he finally took his career into his own hands. Going to be interesting to see what happens with Tinsley.

It appears Iverson really is going to end up in New York and still, my thoughts are a clustermash of confusion.

I just hope the Nets get their victory against the Knicks on Sunday, first.