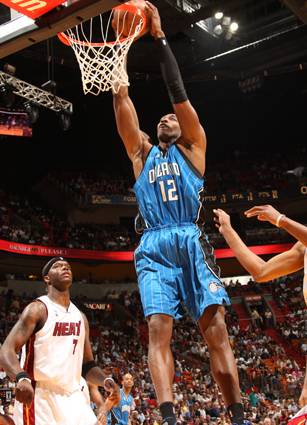 Very quiet night in the L to recap.

Hamed Hadaddi with 10 points and eight rebounds in less than 10 minutes of play. That’s kind of nuts. He may finish with more, but that’s what he’s got with 3:14 left in the fourth quarter of this Clippers/Grizz game.

What is with Al Harrington screwing up in crunch time? Getting ejected last night in the final minutes of the game really wasn’t smart.

It’s official: I’ve added Pops Mensah-Bonsu to my list of guys that make me happy to watch. He’s just loving life and kicking ass and has all of Toronto absolutely in love with him. It’s fun.

I have to admit, I missed the retiring of Zo’s number. Yikes. I probably also missed the tears that would inevitably go along with that. Sorry but, I needed a timeout with my roommate and I missed it. And, by timeout, I mean a coffee break that was wonderful, not a timeout like, in trouble timeout. May not have mentioned it lately, but I am so lucky to have many amazing people in my life.

Besides the timeout from the world with my roommate, I had lunch with a college friend that turned into a three hour affair and then spent a piece of the evening with one of my most favorite people in the world. Not a lot of basketball, but it was still a wonderful day. Hope you all have a great one today.

ps. How are the Cavs really first in the league? I see this every day and don’t believe it sometimes.

Moving away from the NBA for a moment, I had my Cuse love challenged yesterday because there was no mention of their season-ending game against Oklahoma. Let me tell you, I was buried in the media gondola watching the game on my laptop at the ACC in-between the Raptors/Thunder contest last Friday. My heart was breaking for the boys in Orange and then I was gutted when Flynn stepped in for the charge against Blake and instead got run over and landed hard on his back.

I thought his night was over and that the Orange were done. He came back and played the second half, the Orange made a late run, but it was over. Props go to Blake Griffin and his squad for that game (and then to UNC for dethroning them), but my champions are Syracuse and nothing will change that.

Also, that Villanova/Pitt game was one of the best tourney games we’ll probably see this season. That was wild. When Dixon went down into what was basically a split with a guy on either leg, yeooooch. Talk about painful. And the guy came back to play! I didn’t expect that.

Also, Kemba Walker. Love that. A rookie scoring a career-high in a tourney game. Fantastic.

This night has flown by and I don’t know where the missing hours have gone. The Nets played the Bucks and they kind of forgot to show up. Honestly. Down 19 after one, down THIRTY at the half, the Nets lost to the Bucks, 107-78. It was ugly. Really ugly. Devin Harris and Vince Carter combined for 19 points on 6-22 shooting. Richard Jefferson had 29 points and 10 rebounds to lead the Bucks as Charlie Villanueva added 20 and Joe Alexander had 16 off of the bench. Chris Douglas-Roberts scored 14 for the Nets and Brook Lopez scored 10 points to go with 10 rebounds.

With a 101-95 victory over the Heat, Dwight Howard grabbed his 5,000th career rebound, becoming the youngest to reach the milestone. The Heat had retired Alonzo Mourning’s number prior to the game but Howard was the man of the night, finishing with 22 points to go with this 18 rebounds as the Magic continue to hold onto the number two spot in the Eastern Conference as the season winds down. A three from Rashard Lewis sealed the victory for Orlando in the final minutes. Lewis finished with 21 points as Hedo Turkoglu added 16. The Heat were led by Dwyane Wade’s 42 points, but they weren’t enough.

The Jazz survived a late run by the Knicks to hang on for the 112-05 victory last night. In the final minutes Al Harrington was ejected in the final seconds as the Knicks came back from a 24-point fourth quarter deficit to briefly go ahead by one. With his team trailing by six, 22 seconds on the clock, Harrington again showed bad judgment as he argued with officials and was thrown out of the game, setting up Kyle Korver for two free throws that extended the Jazz lead and sunk the Knicks. Before the ejection, Harrington had 24 points (but 8 turnovers), as David Lee scored 21 points to go with 10 rebounds and Wilson Chandler added 14. The Jazz received a 24-point, 13-assist night from Deron Williams, while Carlos Boozer had 21 points and 11 boards and Ronnie Brewer scored 17.

Speaking of that Golden State/Memphis game, the Grizzlies pulled out the victory, taking down the shorthanded (nine men in uniform), Warriors, 114-109. They were down by nine in the final quarter before coming back by outscoring Golden State 37-25 in the period. OJ Mayo had 24 points and a career-high 10 assists, Rudy Gay and Mike Conley scored 21 points apiece and Hakim Warrick added 16 off of the bench. Monta Ellis scored 29 points for the Warriors as Jamal Crawford had 22 points and Kelenna Azubuike added 14 in the loss.