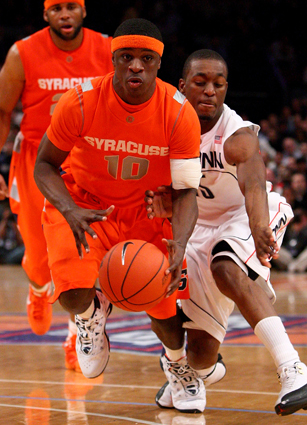 Before I begin, I need to apologize. I don’t know what to do right now. I am so happy and tired and jacked up and overwhelmed and bewildered and drunk off of Syracuse love.

I honestly cannot remember the last time I felt like this. I’m like KG when something good happens and he looks drunk out of his mind. That’s what I feel like.

I know this is an NBA recapping column. It is also a basketball column. SLAM is basketball.

Last night, the Lakers defeated the Spurs and the Cavs took down the Suns, but my heart, eyes, ears and mind were focused solely on one thing: Syracuse vs. UCONN.

If you did not see this game, I feel for you. It was the gutsiest performance I’ve seen from two teams in a really, really, really long time.

I knew I loved Flynn and these boys, but I didn’t expect tears to come as this game was winding down and the players started celebrating, struggling to even stand up. Yup. I know.

Okay. I’m going to break this down with stats and facts, because I’m not sure I can even string paragraphs together coherently right now. Then hopefully I will have calmed down enough to fill you in on the NBA. Oh yeah, I’ve got shootaround tomorrow a.m. @ 10. That should be fun.

Try to stick with me here.

Eight players fouled out in this game – four from each team.

Syracuse played the night before, defeating Seton Hall 89-74. In that game, Jonny Flynn and Eric Devendorf each played 35 minutes, Paul Harris clocked 25 minutes and Andy Rautins had 28. (Importance being, UCONN was rested, Cuse was not).

Three players logged 60-plus minutes of action, that’s ridiculous. Flynn played a game-high 67 minutes; Devendorf and UCONN’s AJ Price each had 61.  That means Flynn had played over 100 minutes in less than 24 hours. And he will be playing some more as Syracuse plays against West Virginia tonight at 9 p.m. ET.

Cuse guard Justin Thomas played 7 minutes, which isn’t that remarkable, until you realize that Thomas averaged 2.3 minutes per game this season, all in garbage time. This was a win that came from digging deep.

Way back at the end of regulation, a broken play on Cuse’s final possession ended up with Devendorf shooting a three at the buzzer, draining it to give Cuse the 74-71 victory. Devo jumps on the scorer’s table, his teammates flock him, the crowd is going crazy. The #20 team has just taken down the #4 team.

Or have they? After the refs went through replay after replay, they waved the shot off and we went into overtime.

Imagine how emotionally draining that must have been; to think you’ve won the game, to be celebrating with your teammates, with all that weight off your shoulders, only to realize that shot was no good and you’ve got to go back to battle for another five minutes. Another five minutes that ultimately stretches into 30.

In the first five overtimes, Syracuse never held a lead.  Not once. Yet overtime after overtime, they found a way to tie it up and prolong their chances to win.

That shot was a back-breaker for the Huskies. Cuse kept pushing and found a way to outscore UCONN 17-7 in the final five minutes of the 70-minute contest.

I know a lot of people are probably going to say the game was sloppy and downright bad in the final overtimes, but that doesn’t matter to me. What matters is the grit, the guts, the love and desire that these guys showed last night. From both teams.

When shots clanged off the rim, when guys couldn’t get their legs under them to go up for a rebound, I reveled in it, rather than rolled my eyes. Because I know they’ve given everything. Emotionally and physically, every ounce of them is on that floor.

I’m not a person who will compare the college game to the NBA, because I love them both separately and for different reasons. But during the tournament, there is something so special, so sacred about these guys playing their hearts out, for each other and for the love of the game.

And that’s what it was all about last night. Even when cramps set in, fatigue had come and gone six times over and guys were physically unable to stand up during any extended stoppage of play, still the light shines bright, and it is the most beautiful light a true basketball fan can ever hope to see.

Running on fumes, playing solely on heart – and it’s just the quarterfinals of the Big East Tournament.

It was one for the ages and perhaps, the best game I’ve ever seen.

Tell me, what were the most amazing performances you’ve ever seen? Not necessarily a playoff game or championship clinching game, but just the gutsiest performance by an individual or team, NBA or NCAA.

This one ended up reminding me of MJ in game five, Bulls/Jazz ’97. I know, these guys were not sick, they are not the greatest ever, and it wasn’t an NBA finals game, but the looks on their faces made me pause and think of MJ and then I felt thankful all over again.

I love this game!

Okay, now, onto the NBA action:

Bron with another triple-double. MVP?

Chris Webber thinks so and can I just say, it is so wonderful to have him join the guys on Inside. He’s fantastic as an analyst.

JRich attempting to do a 360 dunk in the fourth Q of a close game in Phx? To quote Russ, “If he played for San Antonio, he’d be dead right now.” Yeah, I don’t think Pop would take to well to that.

Okay. Thanks for  sticking with me. I know I kind of hijacked my column here today. I’ll try to stay on topic from here on out. I was told I had too much of the Lakers yesterday. Well, here’s an overdose of Orange Crush. Just for today, anyway. They deserve it.

And, if UCONN is your team, sorry about the extended Cuse love, be proud of your team, those guys, every single one of them, were amazing.

One more note on Cuse; I thought Paul Harris was going to dislocate his shoulder or at the very least, damange his rotator cuff when he attempted a dunk in the sixth OT (I think it was the sixth), and was rejected by the rim, badly. He ended up getting his own rebound though, and finishing with an and-1.

What a wild night of basketball.

The Lakers took down the Spurs in San Antonio 102-95, thanks to a blistering hot opening quarter that saw the Lakers go up 35-17 after the first 12 minutes of action. While the Lakers would cool down and the Spurs would finally settle into an offensive rhythm somewhere around the middle of the third quarter (thanks to Tony Parker, finally getting into a groove), it was ultimately too late for San Antonio who killed themselves with their free throws. San Antonio outscored LA 32-25 in the third and had what was an 18-point lead cut down to single digits for the start of the fourth. They would continue to get close, as close as two, but every time they had a chance to get closer, they’d miss a free throw. For the game, the Spurs shot just 8-16 from the line while LA was solid at 12-15.  Down the stretch, the Lakers were just a little too efficient for the Ginobili-less Spurs, despite a season-high 25 points from Michael Finley. Parker also finished with 25 to go with 9 assists as Tim Duncan scored 16 points, 11 rebounds and 5 assists. The Lakers were led by Kobe Bryant and Pau Gasol who each scored 23 points while Gasol also added 11 boards and Lamar Odom added 12 points and 10 rebounds.

Almost ten years to the day since the last time they won in Phoenix, LeBron James led the Cavs to victory in Phoenix, delivering the Suns their sixth straight loss. While the Cavs led 63-62 at the half and the game was close throughout, the Suns faded fast in the fourth as Cleveland outscored them 30-18. A crucial point of the game was during a breakaway when Jason Richardson opted for the 360-dunk. LeBron has been challenged by the Cavs coaching staff to get the “chase down” block on guys who are in the open court and last night he did just that, stopping JRich’s dunk attempt and firing up the Cavs in the process. From there, the Cavs were able to stretch their lead and go on to the victory. Besides his block, Bron also finished with yet another triple-double. He’s wild. He finished with 34 points, 10 rebounds and 13 assists, adding 3 steals and 3 blocks as well. Mo Williams added 30 points and Sasha Pavlovic added 16 off of the bench as the Cavs connected on 17 three pointers as compared to only four for the Suns. Matt Barnes led the Suns with 21, Steve Nash had 20 points and Grant Hill added 15 in the loss.