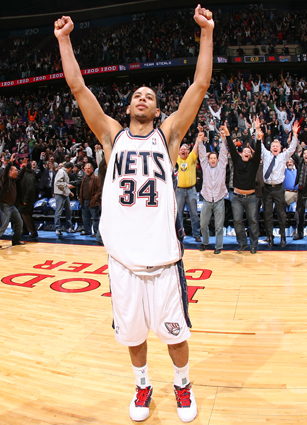 Good Morning Everyone. Hope some/most/all of you got to at least catch highlights of that Devin Harris miracle shot last night. Beautiful. Well, watching the ball sail through the net was beautiful, the fumble and stumble before it was released wasn’t.

A game-winner from halfcourt at the buzzer. That’s fun. It (along with the 41-point performance from Nate Robinson), made up for the rest of a night full of blowouts and less than thrilling matchups.

Bold statement from the Clippers announcers: “Since Christmas, there has only been one rookie of the year and he’s right here in this building.” I really, really like Eric Gordon, too, but really?

I’d pick Westbrook over Gordon at this point, too. Maybe that is because I’ve seen OKC play more than the Clippers though.

Speaking of the Clippers, Fred Jones is pretty fun. You all know I love a good story, and when a guy who has been out of the league working out and trying to work in another chance at his dream is able to turn a 10-day into being signed for the rest of the year (even if it is the Clippers), I’m rooting for him. Watching him go baseline for a beautiful throwdown last night was the icing on the Fred Jones cake. Love it.

And the Celtics are looking really scary lately, but please tell me, what is up with the insane amount of Boston fans in Denver? That was just weird.

I still can’t get over that shot from Harris.

I’ve gotta try to keep this short because I’ve got a busy, busy day ahead of me, starting with Raptors/Wolves shootaround this a.m.

I do need to mention that awful flagrant-2 call and ejection of Josh Smith last night in the Hawks/Jazz game. I didn’t even think the foul was a flagrant-1 let alone grounds for an ejection. Yes, Harpring fell hard, but it’s basketball. Sometimes that will happen. I hated that Harpring fell, jumped up and lunged at Smith and it was Smith and the Hawks who were punished.

I don’t know about that.

I do know that the Warriors losing to the Clippers isn’t fun.

While this one was all Philly early, a 19-6 run from the Nets closed the gap and the second half was a back and forth affair that the Sixers had appeared to win when Andre Igoudala hit a free throw with 1.8 seconds remaining on the clock. While the Nets inbounded the ball to Devin Harris, who had the hot hand all night with 36 points, he fumbled the ball and had no choice but to heave it at the basket from halfcourt as the buzzer sounded. While the buzzer sounded, the ball sailed cleanly through the net and the officials had to spend a few minutes looking at replays to determine if the shot was good. Harris finished with 39 points and 8 assists as Keyon Dooling had 16 points off of the bench, including two three-pointers to cap off that 19-6 run in the second quarter. Igoudala led the Sixers with 24 points, Samuel Dalembert added 13 points and 10 rebounds and Andre Miller had 17 points and 10 assists in the loss.

There were another round of blowouts last night and this was certainly one of them. With Utah topping 30 points in each of the first two quarters, they led, 66-54 at the half and stretched their game into a blowout shortly into the third when they held Atlanta to only 17 points in the quarter. Things got chippy in the fourth when Matt Harpring went dow hard after a (clean), Josh Smith foul. Harpring hopped up and ran at Smith and had to be restrained by officials. The refs made the decision to eject Smith for the foul, calling it flagrant-2. By then, the game was already out of reach for the Hawks as Ronnie Brewer scored 19, Paul Millsap had 16 points and 12 rebounds in a bench role with the return of Carlos Boozer (2 points in 20 minutes of play), and Deron Williams added 15 points and 10 assists as well. Joe Johnson had 17 points for the Hawks as Al Horford added 14 points and Flip Murray scoring 13.

One night after losing a tough one to a shorthanded Milwaukee Bucks squad, the Denver Nuggets came home and prepared to face a Boston Celtics team that was without Kevin Garnett. Prepped or not, the Nuggets were no match for the Celtics who quickly picked up where they left off in Phoenix Sunday afternoon. While the C’s led by nine after the first quarter, they outscored the Nuggets 31-17 in the second and they had dashed Denver’s hopes by the half, leading, 60-37. Things only got worse in the second half and even when the Celtics cleared their bench, the Nuggets could not make up any ground. Boston connected on 14 three-pointers for the game as compared to only four from the Nuggets. Ray Allen had 26 points for the Celtics as Paul Pierce scored 22 and Rajon Rondo added 14/8/8 on the night. Leon Powe added 16 points off of the bench. JR Smith led the Nuggets with 19 points off of the bench as Carmelo Anthony had 18 and Johan Petro added 9 points and 10 rebounds in the loss.

Playing without Danny Granger and Mike Dunleavy, the Pacers gave the Knicks their best shot, but simply could not hold them off in the second quarter when they started to heat up. Troy Murphy was fantastic for Indiana, finishing with 19 points and 21 rebounds and Jarrett Jack added 33 points, but when Nate Robinson started hitting his shots, he kept on shooting, helped the Knicks to a 42-point third quarter and finished with a season-high 41 on the night, enough to get his team the victory. Those 41 points came off of the bench. Al Harrington scored 27 points on the night and double-double machine David Lee added 20 points and 13 rebounds. Marquis Daniels added 28 points for the Pacers in the loss as the Knicks created more breathing room between the Pacers and themselves in the standings.

With Tyson Chandler back and good for 15 points and 10 rebounds in his return (to the game and to the Hornets), New Orleans were able to hold on for the 112-105 victory over the Kings. In the fourth with the Kings on their heels, it was the return of the CP3-TC alley-oop, times three. With Chris Paul scoring 12 points in the period and racking up the assists to finish with 13 ( to go with 27 points), the Hornets were able to grab a road win and take the shine away from Kevin Martin who finished with 32 points and scored 24 of them in the final period as he tried his best to lead his team to the victory. David West added 24 points, 9 rebounds and 5 assists and Peja Stojakovic scored 18 on the night. Besides the 32 from Martin, the Kings received 17 points, 6 assists and 6 rebounds from Francisco Garcia, 13 points and 14 rebounds from Spencer Hawes and 19 points from the new King, Andres Nocioni.

While the Clippers have been struggling mightily this season, they found a Monta Ellis-less Golden State squad at just the right time. As the Warriors try to adjust to life without Monta after just getting used to him being in the mix, the Clippers took advantage. Led by rookie Eric Gordon and former Warrior Baron Davis, the Clippers appeared to turn the game into a blowout in the third, but had an interesting fourth quarter as the Warriors came back to challenge LA until Davis hit a three to put the Clippers up 114-104 with 1:27 left in the game. The breathing room turned out to be enough as the Clippers used the clock and the Warriors ran out of time for the comeback. Davis finished with 25 points, 9 rebounds and 10 assists to go with 4 steals, just missing a triple-double. Zach Randolph scored 27 points to go with 11 rebounds in his return from a two-game suspension and Eric Gordon scored 27 points as well. The Warriors were led by Stephen Jackson’s 28 points, but only eight of those came in the second half. Jamal Crawford scored 15 points and Corey Maggette added 10 off of the bench.