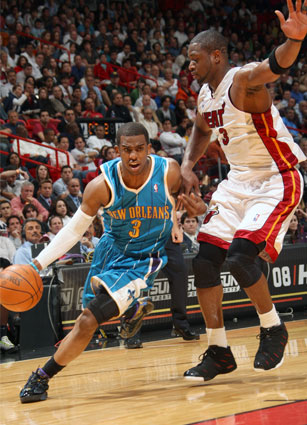 Hello, how’ve you all been? I know, I wasn’t here Monday and then of course, yesterday was an off day because of the NCAA tournament, but I’m back. Kind of. I’m still a little under the weather and my brain isn’t working so well thanks to all of the self-medicating I’ve done. For whatever reason, cold medication makes me 10x chattier than usual, makes it impossible to focus and also makes me one tired girl.

So, I’m here, but not really. I went to the Raptors game last night and forgot my recorder. It was that kind of “can’t focus” silliness that I’ve been going through. I had to use my pink blackberry for my interviews. That was a little interesting. One of those moments where I thought “perhaps, I should have gone with the basic black”.

Met our guy Sekou Smith pregame as we spoke about the insanity that is Speedy Claxton’s twitter, @speeddeamon. Blogging about getting out of ATL and how your team doesn’t play you boggles my mind. I pictured this happening with Steph or maybe even a disgruntled Shaq, but I did not envision Speedy Claxton airing out the laundry over Twitter. Wonderful world we live in.

Sekou was fun though. It was great to finally get to say hello to another guy I’ve read for so long.

Because of the game I didn’t see much of what happened last night and I don’t really trust myself to read/take in boxscores correctly so I’m just going to hit you with a few things I did see/hear and you can fill in the blanks. I promise I will get back on track soon. We’re in the homestretch! I’ve gotta get healthy for Playoffs!

The Hawks shot 8-13 from the three-point line in the second half of their game against the Raptors to get the 118-110 victory. Josh Smith and Joe Johnson led the way with 25 points apiece as Al Horford added 15 points and 12 rebounds and Mike Bibby had 10 assists to go with 13 points. Chris Bosh had 21 points and 10 rebounds as Jose Calderon had 16 points to go with 13 assists in the loss.

I didn’t see the Heat/Hornets game, but wish I had. This one went into overtime with the Hornets winning, 93-87 thanks to a near triple-double from Chris Paul who finished with 26 points, 9 rebounds and 9 assists to also go with a blocked shot and 6 steals. Yeah, talk about a stat-staffer. Good Lord. Peja Stojakovic scored 24 points and David West added 20. Dwyane Wade was ejected with 1.4 seconds remaining for arguing what he felt was a non-call but finished with 32 points ad 6 assists before he left. Michael Beasley added 25 points off of the bench for the Heat.

The Spurs avenged a previous loss against the Thunder to get their first win since learning Manu is out for the rest of the season. Taking down OKC, 99-89, Tim Duncan had 25 points and 10 rebounds as Tony Parker scored 21 to go with 10 assists. Kevin Durant led the Thunder with 24 points while Jeff Green added 16.

The Bobcats won a big game against the Sixers, 101-98, in their quest to make the playoffs. Raymond Felton finished with 32 points as Gerald Wallace added 29 points and 11 rebounds. Andre Miller had 23 points for the Sixers and Louis Williams added 20.

The Bulls managed to pull out the 110-103 victory over the Knicks, thanks to clutch free throws from Ben Gordon down the stretch. Gordon finished with 17, Derrick Rose had 18 and Kirk Hinrich added 25 points off of the bench. Wilson Chandler scored 26 to lead the Knicks, Al Harrington scored 23 and David Lee added 17 points and 13 boards.

Blazers took down the Grizzlies, 96-93 thanks to a second half that saw them outscore Memphis 61-46. Brandon Roy had 24 points for the Blazers while OJ Mayo had 31 for the Grizz.

Lakers pummled the Kings, 122-104. While I was falling asleep, I caught Sasha Vujacic throw down a dunk (not sure who it was on, sorry), and then caught sight of the Laker bench cheering him on. I fell asleep shortly after that. Pau Gasol had 26 points and 12 rebounds for the Lakers while Kobe Bryant added 22. Spencer Hawes led the Kings with 21 points and 15 rebounds as Jason Thompson added 18 points and 11 rebounds.