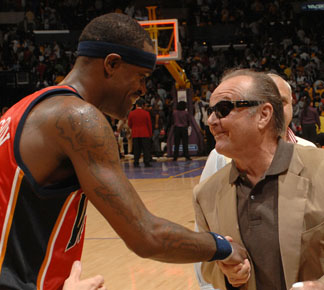 March Madness, NCAA, NBA, so much basketball. I don’t think my tv was turned off for more than a few hours the entire weekend. Yeah, this might sound horrible to spend so much time sitting in front of the television on a holiday weekend, but to me it was pure sweetness. I feel happily fulfilled, despite a Laker loss that had me hopping.

The Laker game last night was a story of two halves, and the story of Stephen Jackson. Giving up 72 points in the first half, then coming back to take the lead with five minutes remaining, it was a wild ride. Kobe hitting those back to back threes in the final 54 seconds was crazy, but inside I just knew it was all about Jax. That we allowed him to get wide open beyond the arc on consecutive possessions drove me crazy, but I was still entertained watching that game. At least the second half.

I couldn’t even get a little upset when I saw Baron go over and brush off Captain Jack. Guy is good. Really, really good.

Play of the night? “Kobe’s behind-the-back dribble to get past Baron, spin move to leave Jax for dead, and then a wrap-around, semi-behind-the-back pass around Harrington to give Turiaf an open dunk”. I couldn’t agree more, Tariq.

Tonight’s rematch in Oakland will be intense. I can’t wait.

To speak about injuries again, I’m pulling for Dirk to have the speediest of recoveries from that nasty looking leg injury yesterday afternoon. I don’t like the Kidd trade at all for Dallas, I’d rather Denver make the playoffs and the Mavericks have been kind of boring this season, but I still hate to see an injury affect a team this late in the season. Dirk, get well.

My heart is pulling for Gil and this craziness that is surrounding his return. It’s only normal to be cautious returning from back to back surgeries. Then to have different reactions and diagnoses with regards to that comeback doesn’t make it any easier. Now, after Gil had all but psyched himself up to play in his first game back the Wizards medical staff steps in and tells him he is not ready. From psyching himself up to the doc’s psyching him out, it’s just harsh. I’m glad they held him back if they feel he needs more time because I want him healthy just as much as anyone else, but damn, isn’t there any smoother way to make this happen? Thinking of you, Mr. Arenas.

Toronto continues to struggle and it isn’t pretty. 11 losses in their last 14 games. Ivy and Carmelo put on a show yesterday as they outshone Bosh who was pretty great in the first three quarters.

Congratulations to LeBron who has become the Cavaliers all-time leading scorer. Scary when this doesn’t even seem like a big deal because we all know this is only one of the many, many milestones he will reach in his career.

While our boy Russ gave us some of his game notes of a young Stephen Curry, I got to see clips of an 11 year-old Curry shooting lights out at the ACC when his dad was with the Raptors. Crazy, the kid was shooting from damn near halfcourt. What a tourney he has had so far. Those 40 points were just incredible.

My bracket is dead and I could not be happier. These upsets, overtime games and big performances? Perfect opening round.

Not to sound like a broken record, but CP3. It was fun watching the Hornets do what the Texas trio couldn’t do as they took down the Celtics. I wonder what Rafer Alston has to say about David West’s 37 points because we know each and every one was meant for him. Also, have to mention the play of Pargo and Bonzi. The Hornets bench has been looking nice.

Phoenix continues to learn how to play with Shaq and Amare continues to reap the benefits. 38 in their win against Houston. Most impressive, those 38 points came on only 15 shots as he connected on 9-15 from the floor and shot a franchise-record 20-20 from the free throw line. That is pretty special. Now, give us some D and things will get interesting in Phoenix.

While the Wizards learned on Sunday that they will have to wait longer for the return of Gilbert Arenas, they shook the news off and showed once again, they are not only their superstar. The Wizards went on to knock down Detroit 95-83, using strong first and fourth quarters to hold off the Pistons and grab their 36th victory on the season. After leading 28-20 at the end of the first quarter, the Wizards went up by as many as 12 and never gave up their advantage the rest of the way through. The Pistons would get as close as four points early in the fourth but Washington met each mini-push by Detroit with one of their own, keeping control of the game and going on to the victory. The Wizards were led by Antawn Jamison who had 24 points and 12 rebounds. Caron Butler had 17 points and 6 assists, Brendan Haywood scored 16 points and DeShawn Stevenson added 12 points. Richard Hamilton had 19 points for the Pistons, Chauncey Billups had 11 points and 11 assists, Tayshaun Prince scored 13 points and Rasheed Wallace added 11.

Already struggling against the Spurs after having been up by as many as 12 points and finding themselves unable to stop a San Antonio run to cut into their lead, the Mavericks had a much bigger issue to worry about than just getting the victory against the Spurs. While they led by 12 points in the third quarter, the Spurs put together a 19-0 run and the Mavericks had lost Dirk Nowitzki by the end of it. After Nowitzki came down with a leg injury, the wheels came off for Dallas and San Antonio took their first lead in the second half of the game and never gave it up again. The Spurs won despite horrendous first half shooting that left them coming in at 26% for the game. They out-rebounded the Mavs 54-43 and had only 5 turnovers as compared to 10 for Dallas. Manu Ginobili led San Antonio with 26 points, 8 rebounds and 6 assists off of the bench. Tim Duncan had 19 points and 13 rebounds and Tony Parker had 13 points. Jerry Stackhouse had 19 points for the Mavericks, Jason Terry scored 17 points and Josh Howard added 11 in the loss.

With Chris Bosh back for his third consecutive game the Raptors were looking to get things back on track against Denver. Problem for Toronto was, the Nuggets were also trying to sort some things out. While The Raptors came into the game at 35-34, they held onto the fifth spot in the East. Denver came into the game 41-28, but they are in the West, where they are currently in ninth place and trying to make the playoffs. While Toronto led early and jumped out to a 35-23 lead after the first quarter they were unable to stay with Denver’s high-scoring game and gave up their lead on the opening possession in the fourth quarter when Linas Kleiza knocked down a three-pointer. After spending most of the game trying to come back from that 17-point deficit, the Nuggets went on to shut down Chris Bosh, and outscore the Raptors 38-27 in the period to go on for the win. Allen Iverson had 36 points and 6 assists for Denver, Carmelo Anthony added 33 points, JR Smith scored 14 off of the bench and Kenyon Martin had 15 rebounds. Bosh shone in the game before fading in the fourth quarter, finishing with 17 points, 12 rebounds and 9 assists in the loss. Jose Calderon scored 17 points, Jamario Moon scored 15 points grabbed 15 rebounds and blocked 3 shots. Andrea Bargnani scored 16 points and Anthony Parker added 14.

Last night, the Lakers learned the hard way that more often than not the fourth quarter belongs to Golden State. After being embarrassed in the first half of their match up with the Warriors, the Lakers had given up 72 points at the break and trailed by 23. They would be the team to come out firing in the third, outscoring Golden State 32-15 in the period and going on a 32-9 run to cut the deficit and then take the lead on free throws by Kobe Bryant with five minutes remaining in the game. While they had allowed the Lakers to come back from 26 down, the Warriors were not about to quit and they started fighting back, behind Stephen Jackson’s in the final minutes. With Bryant scoring 16 points in the final period, Jackson came up huge, hitting back to back three’s to neutralize back to back three’s by Bryant and keep the Warriors on top. After Bryant knocked down a three-pointer with 30 seconds remaining to cut the Warrior lead to one, 112-111, Jackson hit his second consecutive three with eight seconds remaining and the Warriors grabbed the 115-111 victory. Jackson and Monta Ellis each finished with 31 points for Golden State while Baron Davis scored 18 points and Al Harrington scored 13 points to go with 10 rebounds. Bryant finished with 36 points, 14 rebounds and 8 assists for the Lakers while Lamar Odom had 19 points, 22 rebounds and 4 blocked shots and Ronny Turiaf and Derek Fisher each scored 16 points.

After sweeping through the Texas trio, the Celtics were ready to grab a victory against the Hornets and continue to roll. Chris Paul and David West had something else in mind. With Boston leading by as many as 15 points early on and holding onto their lead throughout, the Hornets needed someone to step up offensively. With Paul’s minutes limited by foul trouble, fellow all-star West was the one to save the Hornets and knock down the Celtics. While Boston led by eight going into the fourth, New Orleans got to work early upping their defensive pressure while ramping up their offense on their way to outscoring the Celtics 32-17 in the final period. The Celtics went longer than five minutes without scoring and the Hornets took their first lead since early in the first quarter. At the end of a 9-0 run, that lead had extended to six points. After Boston cut the deficit to three with 1:31 left in the game, Paul rose up and knocked down a three-pointer, then followed it up with two free throws to keep the Hornets up six with 24 seconds remaining as they went on for the impressive win. While Paul finished with 19 points and 7 assists, the star of the night was West, scoring 37 points in the contest. Jannero Pargo scored 15 points off of the bench and Bonzi Wells added 12 points and 8 steals in the game. The Celtics were led by Paul Pierce’s 28 points while Rajon Rondo scored 23 points and Kevin Garnett added 19 points and 12 rebounds. Ray Allen added 17 in the loss.