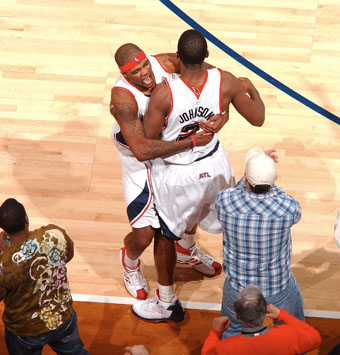 This Lakers/Denver game is beautiful. I am in a sports bar called Hoops and it is karaoke night. I’ve already witnessed a guy sing “I wanna Sex you Up”, got to spend some quality time with Amare and Raja and had a great time watching the Raptors/Suns game. It has been a wonderful night. Kobe blocks Iverson and then the feed to Bynum. He is so the best player in this league when he is focused. Damn. And Bynum’s block on Anthony, yes, yes yes. I don’t even care if I am gushing, this feels good for a Laker girl.. The Suns are the coolest team in the league. Between Raja singing in the shower, Nash drinking out of a Gatorade cup that mysteriously leaves a foamy froth on his upper lip and Amare beyond pumped about his “0” foul calls, they are the locker room I most like being in. Of course, I’ve only ever been in 4, but I don’t see that changing anytime soon. Iverson tonight is like flashback central. It is so bittersweet to see him kill it like this, even if it is at the mercy of the Lakeshow.

Okay, above paragraph was written last night, when I had the greatest of intentions to get the game notes out…It didn’t quite work out that way. I guess going to a sports bar with the promise to get some material down before you kick back isn’t the brightest of ideas. A few long island iced teas later and my fingers were slipping and it was typos-a-plenty.

I wanted to thank Lang for relieving me of my duties yesterday and for delivering a great edition of The Post Up that I got to enjoy sitting in the airport. I also want to thank everyone for their comments and suggestions yesterday. As I get more and more comfortable with this program and with my job here I promise to keep adding to the recaps. I’ve already got some new ideas ready to hopefully keep everyone on their toes and give more than just the stats. Be patient with me, and I will get it right! Now, onto tonight’s games.

Miami @ Portland is on right now and it’s the start of the third quarter. I haven’t gotten to watch much of either team yet this year, but Portland is fun when they are playing like this. Shaq mashing up Pryzbilla’s face with the ball was rough. I love Roy and Aldridge and it is cool to watch Nate McMillan interact with them both. I love the aggressiveness of Roy, attacking the hoop, going right at Shaq and drawing the foul. He sets the tone and he is doing a great job tonight.

I can’t say enough about Cook’s performance for Miami. The kid is looking great, and Lord knows Miami needs all the help they can get. It is tough to watch Dwyane Wade struggle as much as he is right now. The frustration that is written across his face as he sits on the bench comes across loud and clear. He even looks different to me. Pat Riley looks lost and this road trip is only going to get tougher. What was Karl doing keeping Iverson in the game until the final minute like that? He put in a 48-minute performance the night before, give him a break. I know he can run for days, but that is just crazy. It is almost as bad as Doc Rivers playing his big three huge minutes when it is completely unnecessary. Sure, it looks nice now but, this season is a marathon, not a sprint.

Sam Mitchell displayed his charm during media interviews yesterday as he met with reporters after the Raps morning shoot-around. Nice to see that Moon is taking it all in stride and continuing to make the most out of his first season in the league. Watching him call out Moon in the middle of practice was awesome. He is a great fit as a coach for the 27-year old rookie.
Tonight is Utah against San Antonio and I am looking forward to catching that match-up. As well, Golden State against Miami on the second night of a back-to-back is one I don’t want to miss. Sure, it might be crappy basketball from the heat, but, who can resist watching to see what Riles does next to try and shake up his team and get a win? Golden State is pretty exciting to watch on their own, too.

The Minnesota Timberwolves may have the worst record in the league but, they still came out to win last night and it took the Atlanta Hawks until the final seconds to pry the victory out of Minnesota’s hands. Atlanta came out strong and had what appeared to be total control in the first quarter, going up by as many as 19 points in the opening 12 minutes, but, Minnesota was poised and worked their way back into the game, finally taking a lead with just under 2 minutes left in the third quarter on a layup by Marko Jaric. That third quarter was one that the Hawks will have nightmares about, as they managed only 8 points in the period as compared to Minnesota’s 27. In the fourth, the score was close the entire way through and there were 5 lead changes in the last 45 seconds alone. Jaric had a layup to put the Timberwolves up 87-86 before Josh Smith responded with a bank-shot with 7.5 seconds left to put Atlanta back up 88-87. It appeared that Jaric had given Minnesota it’s third win of the season when he hit a layup with 2.2 seconds on the clock but, coming out of the timeout the Hawks went to Joe Johnson and he responded. With 2.2 on the clock, Johnson forced some space from Sebastian Telfair, rose up and hit the game-winning jumper as time expired. Final score, 90-89, Hawks. Johnson finished with 21 points and 9 rebounds in 47 minutes of action, while Josh Smith led the Hawks with 28 points and 7 blocked shots. Marvin Williams chipped in 21 points and Al Horford pulled down 15 boards. For Minnesota, Craig Smith had 20 points off of the bench, while Jaric’s 18 came off of the bench as well. Jaric added 8 rebounds and 9 assists to go with his 18 points as Al Jefferson scored 17 and rookie Corey Brewer had 18 boards as the TWolves out-rebounded the Hawks 53-40 in the loss.

One night after netting 51 points in a loss to the Lakers, Allen Iverson had plenty left in store for the Dallas Mavericks. As the Nuggets torched Dallas 122-109, Iverson added 35 points, 12 assists and 6 steals to ensure the victory. On their way to a 39-point first quarter, the Nuggets started a 24-7 run that ended midway through the second quarter. At the half they led 64-56 before Dallas managed to tie things up at 82 all midway through the third quarter. After Devin Harris made a layup to cut the lead to 98-94 with 11 minutes remaining, the Nuggets went on a 9-0 run to extend the lead back to 107-94, and Dallas could not come back as they were outscored 24-17 in the period. In addition to Iverson’s great night, Carmelo Anthony and Linas Klezia each scored 23 points and Kenyon Martin added 18 points. Dirk Nowitzki had a team-high 32-point, 12-rebound night for Dallas, while Jerry Stackhouse added 23 points off of the bench. Josh Howard dropped 20 points and Devin Harris added 12 in the loss.

While this game was televised on TNT solely for the much-anticipated match-up between Shaquille O’Neal and Greg Oden, the young Trailblazers wanted to prove they were more than just a team who had the number one draft pick number and that they are more than just the player they lost this season. In a match-up of youth versus “not-so-youthful”, the Trailblazers came out on top. Jumping out to a 56-42 halftime lead, the Blazers showed some maturity and growth as they withstood the inevitable push by the Heat in the second half. Brandon Roy set the pace for Portland and he finished with 25 points in the contest as the Blazers saw that halftime lead cut to 77-73 at the start of the fourth after Miami outscored them by 10 in the third quarter. Rookie Daequan Cook was largely responsible for the Miami push, as he finished with 20 points on 9-11 shooting. In the fourth, the Heat came within one, 88-87 as Dwyane Wade hit two consecutive shots to cut the lead. Miami did not get any closer as Portland responded with a three-pointer by Steve Blake and then a jumper by Aldridge. With 1:56 left in the game and Portland holding a 97-90 advantage, Roy fed Outlaw for a huge dunk over Cook where he was also fouled. Outlaw made the free-throw to stretch the lead to 10 points and Miami ran out of time. Miami outscored Portland 18-4 on fast break points mostly scored in the third quarter as Pat Riley went with a smaller lineup to try and get back into the game. Besides Roy’s 25, Travis Outlaw added 20 points off of the bench, LaMarcus Aldridge scored 14 points and grabbed 10 rebounds and James Jones added 12 points, including connecting on 4-6 three-point shots. Wade just missed out on a triple-double for Miami, with 21 points, 10 rebounds and 9 assists as Ricky Davis had 18 points and Udonis Haslem added 15.