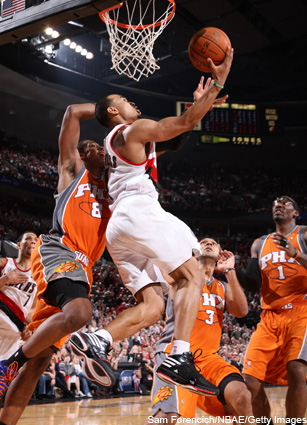 “Jerryd came through for me tonight.” – Brandon Roy

Jerryd Bayless. I don’t know when it started, only that I’ve been pulling for Jerryd for awhile now and couldn’t understand why he was buried on the Portland bench.

When I don’t know things about other teams, I find the person who does. For all things Blazers, I’ve got a trio of boys I hit up and this week Ben from Blazers Edge was the guy who had to listen to my J. Bay questions and reassure me that he would be getting more time, soon. As it turns out, sooner than later with Bayless had a career night scoring 29 points off of the bench as he outscored the other seven bench players on both teams and was also the leading scorer in the Blazers game against the Suns last night.

Portland came back from double digits and stole the game from the Suns despite Amar’e looking awesome and Steve Nash being ridiculous as usual.

The finish in this one was wild. Bayless appearing to seal the deal with free throws, Nash scoring again and again, Bayless missing one free throw, making another, leaving just enough room for the Suns to win with a three. Nash unable to get free from Aldridge to get a good look at the hoop. The Blazers escaping with the 105-102 victory.

Wow. Bayless picked a great night to show the world what he can do. We will be seeing lots more from him and I can’t wait. Nothing like guys getting their chance to show what they can do and shining in that moment.

What stood out to me in the postgame interview with Cheryl Miller, was how Brandon Roy spoke about Bayless and the importance of him getting his confidence up, as Bayless stood to his left. Roy had previously mentioned a displeasure with a three-guard line up. I liked seeing him give his teammate all of the credit on his big night and sort of making up for those comments. He sounded like a leader.

These Blazers are a fun team to root for. The Rose Garden is simply fantastic. I’ve never been there to see a game, but it’s near the top of my list. Their fans are so passionate and truly love their team. It’s pretty special.

In Miami, the Heat came out and absolutely smoked the Magic, winning 104-86. Yes, the Heat over the Magic. They were up by 30 at some points. It was one of the strangest games I’ve seen from the Magic. I know they played the Raptors the night before, but it’s not like that game took a lot of energy out of them. This is two blowout victories for the Heat since holding their closed door team meeting last week.

Wade had 25, seven assists and three blocked shots and he looked good. Interesting to hear that Tim Grover was spending the week in Miami with Wade to make sure he was keeping his body right. Grover is a guardian angel to all of us who love this game.

Dorell Wright looked good for the Heat. Michael Beasley continues to be aggressive. Let’s hope he keeps it up.

Taj Gibson had another solid game for the Bulls off of the bench, scoring 12 points to go with his 10 rebounds as he helped make up for Brad Miller’s scoreless night. Luol Deng scored 24 points and grabbed 13 rebounds to lead the Bulls while John Salmons added 20.

My mind just keeps on going back to Bayless. Wow. It was the perfect “Hi, world, I’m here!” moment. And, yes, it was capped with an exclamation mark.

I see you, Jerryd Bayless.

Before I sign off for the day, there are no words that can express the tragedy of a life that is lost too soon, but my thoughts and prayers are with Chris Henry’s family, friends and teammates. 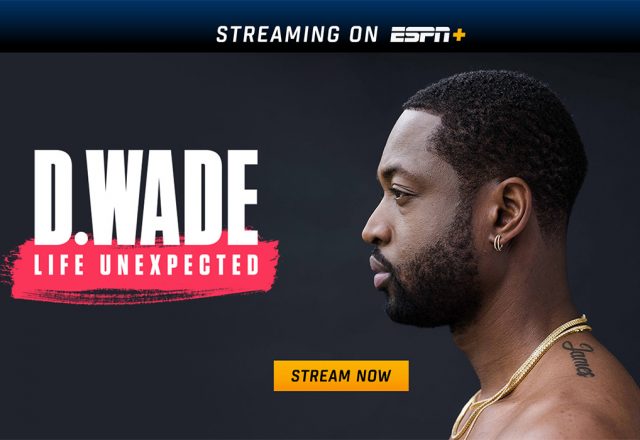