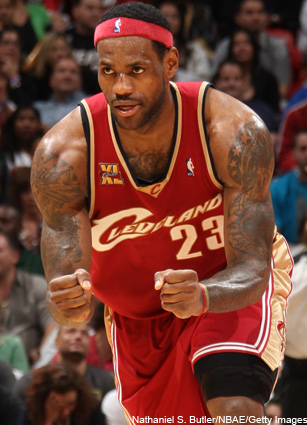 After Wade went off in the first half, scoring a season-high 30 for a half on just 12 field goal attempts, he kind of disappeared. Okay, the Cavs doubled and instead of disappearing, he missed a bunch of free throws, scored just two more points and then after doing some good things on defense, inexplicably decided to attempt a lazy behind-the-back pass on the Heat’s final possession and –of course– Bron got the steal.

It was a little scary to see Wade and Bron both on the floor, slow to get up after Wade fouled LeBron after the steal. With the game on the line, LeBron hit both free throws to give the the Cavs the 92-91 lead and Wade’s three at the buzzer was off. Wade finished with 32 points, but missed a pair of free throws with under a minute in the game and really, really screwed up when he made that silly pass.

James finished with 32 points, nine rebounds and four assists. Wade had 10 rebounds, five assists and three steals in the loss. While the game slowed down in the second half until the final few minutes, the first half, especially the second quarter, was just awesome. Two stars going back and forth, one for one. It was really fun to watch.

26 points for Danny Granger as the Pacers took down the Sixers, 109-98. I don’t think I saw a minute of this game. Watching Philly just kind of stresses me out. I feel like they should be so much better than they are. I don’t know what to think about these Andre Iguodala trade rumors, either.

The Clippers put up a fight against the Celtics in Boston as they tried to get the season sweep, but fell 95-89. Kevin Garnett looked good, finishing with 17 points on 7-for-12 field goals and a huge slam that erased some of the memories I’ve got of a creaky-kneed KG from the start of this season. Rondo was solid again in a battle with Baron Davis, finishing with 16 points on 6-for-8 shooting to go with seven rebounds, 12 assists and four steals. Davis led the Clippers with 16 points and seven assists. Ricky Davis had 13 off of the bench and I can’t seem to get used to Ricky still playing and scoring in the NBA. Makes me think of Scoop J. and that triple-double attempt against the Jazz.

In Memphis, the Grizz picked up their 11th straight home win and took down the Magic, 99-95. Zach Randolph had another strong, strong game as All-Star weekend approaches, finishing with 23 points and 19 rebounds in the victory. Dwight Howard had 27 points, 15 rebounds and six blocked shots, but it wasn’t enough for the Magic who continue to try and figure it out. Was happy to see Howard make his free throws, shooting 9-for-11 at the line.

VC had 15 points on 15 field goal attempts and once again had more fg attempts than Dwight. What do you think about that, Magic fans? I know Dwight’s at the line, so he’s getting touches, but do you like how VC fits into your offense?

The Hawks outlasted the Rockets, 102-95 and Josh Smith had 22 points to go with 10 boards, four steals and four blocked shots. He also had two more eyebrows than his head coach. For some reason, Mike Woodson showed up to the game sans eyebrows. Like, seriously, he didn’t have any eyebrows. He didn’t offer an explanation for it, either. Perhaps he lost a bet? Either way, his team got the W so they had other things to talk about.

Bulls over Spurs! Bet Russ Bengtson was happy… and his mother –a Spurs fan– was not.

Didn’t see this one, but looks like it was close throughout with the Bulls hanging on, thanks to a jumper from Derrick Rose to take the lead and a pair of made free throws from Joakim Noah. Blocking Manu, scrapping down the stretch, the Bulls pulled out the 99-93 victory. Rose finished with 27 points and six assists despite missing shootaround with flu-like symptoms and Kirk Hinrich added 18. TP had 20 points and eight assists to lead the Spurs.

Goran Dragic has come out of nowhere….. He wasn’t able to give the Suns the win against the Jazz as they fell 124-115, but the second year player scored 32 points on 10-for-13 shooting in 31 minutes off of the bench. Not bad for a guy I just couldn’t get a feel for last year.

A big reason why the Jazz got their 26th victory of the season was the 20-20 night from Carlos Boozer who finished with 21 points and 20 rebounds. Deron Williams added 18 points and 11 assists and Andrei Kirilenko scored 25.

While Charlotte has been hanging tough lately and have impressed people in 2010, the Nuggets on their homefloor were too much for the Bobcats to handle taking them down, 104-93. While Nene couldn’t hit a layup to save his life and JR Smith’s shot continued to be MIA (5-for-14 fgs, 2-for-9 from three), Chauncey Billups was once-again Mr. Dependable, scoring 27 points to go with 11 assists as Arron Afflalo scored a career-high 24 points with Melo sitting the game out after spraining his ankle Saturday night.

While I enjoyed Miami/Cleveland a lot, I think my game of the night was in Portland as the Blazers fell just short against the Hornets, falling 98-97 after a Jerryd Bayless missed jumper at the buzzer. Trailing by 16 early, the Blazers fought back to take the lead at the break and the second half of this one was back and forth throughout until Chris Paul hit a jumper with 3.8 seconds remaining. Without Brandon Roy, the Blazers went to Bayless and he was unable to deliver the game winner. Paul finished with 24 points, seven rebounds, 12 assists and five steals. Monster night. Marcus Thornton added 19 points and David West added 18 points to go with seven rebounds. Juwan Howard and LaMarcus Aldridge led the Blazers with 16 points apiece.

How impressive has Portland been throughout this season with the injuries and setbacks? Perfect example of a franchise working it’s way through the ups and downs of a season. Love watching them play. I think I just love Portland. I’ve got this love affair with a city I’ve never been to. If you’ve been to Portland, tell me about the city I so desperately want to visit.

If you saw the Heat game, do tell me: Was Wade trying to make a behind-the-back pass or was he just dribbling behind his back? It’s still kinda perplexing me and I’ve got wrestling on my sports channel rather than highlights right now. Eeeps.