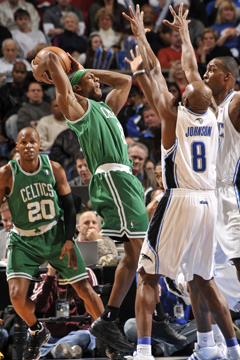 Wow, it seems like just yesterday it was Monday afternoon and I was wishing the week away and suddenly, it’s over. Last night was a quiet night in the league, only two games on the schedule and one was a b-l-o-w-o-u-t, with the Lakers killing the Wizards. While the final score was 117-97, the game wasn’t even nearly that close.

I was actually (shhh!), kinda bored. League pass has me spoiled where I’m not used to sitting through blowouts, even if it is my team. I’m not complaining, let me make that clear, just saying, it’s always odd when there is only one game on at a time. I was loving those 23 points from Bynum, the rebounds even moreso than the points. Let’s see him step up his D now, too.

Reggie Miller has got to go. Really, he’s hurting my ears and heart when I hear him jabbering on.

I love the guy, love that shot and loooooove the clutchness, but I do not like the announcing. Not even a little bit.

First game of the night was okay. I liveblogged it over at The Score, but I couldn’t get into it. I know, I was so jacked for it, but I think I got over-hyped and when the game didn’t quite live up to expectations, I was let down. This is why you hope rather than expect, you don’t get disappointed. You’d think I know better by now.

Those damn Magic had me tricked.

Jameer and Dwight were less than spectacular and the Magic couldn’t get it done after a slow start to kick things off. JJ Redick got into the game early again, and as always I was shocked. When will I get used to seeing him on the court rather than the bench?

Thoughts? Who would be your starter in the East if you’re taking out Iverson? Interesting to hear the TNT guys talk about Vince Carter’s chances of becoming an All-Star. I’d agree with that. He’s been pretty good, even though the Nets are damn shaky as hell right now.

Very, very, very happy the fans got it right as they voted for CP3 to pass Tracy. That was the right choice.

Now I’m getting all excited for the All-Star game. And weekend. One year, one year, I will be there.

Loved the shout out KG gave to Charles in his postgame interview with Craig Sager. That’s good stuff right there.

Chris Webber is the best thing that could have happened to TNT in the wake of Charles needing his time to sort things out. He’s just so damn entertaining, I could watch him all night.

Ever since the Suns were in town last Sunday, my respect, admiration and love for Steve Nash has gone into overdrive. The guy is just so good. On court and off. So engaging, intelligent, giving. Bah. I just want the Suns to get going on a roll. That loss in New York threw me off. I’m going to pretend that the Boston game didn’t even happen.

So…. Coach Iavaroni. Yeah. Yup. Seriously, what are they doing in Memphis? I didn’t expect that. Pretty shocked. I know they haven’t been very great, but what did they expect this season? Interesting move. How many coaches has that been so far this season? Toronto, Washington, OKC, Sacramento, Philadelphia, Minnesota and now Memphis. Am I missing anyone?

With that, have a wonderful weekend and I’ll see you all Monday morning.

While the Magic held the league’s best record going into their match up against the Celtics last night, they were unable to match Boston’s intensity and as a reslt, lost the game 90-80. Boston had played the night before, winning in Miami while the Magic had not played since they had returned from their west coast road trip Saturday night. The five days off took their toll on the team as the Celtics quickly jumped out to an eight point lead and maintained it at the half. In the second half, the Magic hung around, but were unable to cut ito the lead as Paul Pierce had an answer every time the Magic would threaten to cut into the lead. With Dwight Howard fouling out in the final two minutes and Jameer Nelson forgetting how to play basketball until those final minutes, the Magic were unable to compete with the Celtics. Pierce finished with 27 points and 10 rebounds while Kevin Garnett and Glen Davis scored 16 points apiece. Hedo Turkoglu scored 22 for the Magic as Rashard Lewis had 20 points and 10 rebounds and Dwight Howard had 11 points, 11 assists and 3 blocked shots in the loss.

Going in to this game I kinda figured that the Lakers would get an easy W. I’m sure we all did. I didn’t really expect for it to be such a huge blowout the entire way through. While the Lakers led 31-24 at the end of one, they exploded for 41 points in the second quarter to take a 72-47 halftime lead. Yes, 72-47. The game was over before the second half even began as the Lakers shot a ridiculous 69% from the floor in the opening 24 minutes. Andrew Bynum followed up his career-high 42-point performance with a 23-point, 14-rebound performance. Pau Gasol scored 18 points and Lamar Odom added 16 off of the bench as the Lakers had seven players in double figures. Antawn Jamison scored 19 points for the Wizards as Javale McGee added 18 points and 9 rebounds off of the bench.