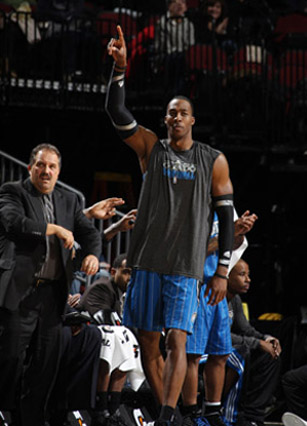 The litany of obstacles facing those who could be bringing you Post Up this week includes but is not limited to: a closed office, an insane blizzard that rocked the east coast, freelance assignments and cancelled flights. Showing that I can, on occasion, “generate” content as opposed to “curating” it, Mr. Continuing Ed is following up a BlogTalk Radio appearance this evening by actually writing a Post Up.

Usual weekday Poster Upper Adam Figman was at Magic-Nets (and killing it on Twitter, as usual. He’d be underrated on there if he had 10 times as many followers. Fix that.) while some potential replacements were befelled (word?) by the above circumstances. So here I am. Between shoveling, getting my daughter to bed and doing the aforementioned radio show, I didn’t actually watch that much basketball last night. But I saw highlights, and I know how to read a boxscore. Besides, like I said in the dek to this story, the Post Up is about you all anyway. As good as Holly was and Adam and Anton are, the Post Up is really only as good as those who read and then participate below. So without further ado, a perfunctory Post Up by the E-i-C that should mainly just serve as a place for our amazing readers to talk about last night games.

The Grizzlies have been a disappointment this season. The Raptors have been a disaster. Z-Bo led the way for the Grizz with 21, while Tony Allen had 6 steals. Toronto was without Andrea Bargnani and Sonny Weems, making an already punchless lineup even worse.

One of the best wins of the season for a Timberwolves team that is showing some spunk, at least at home. Mike Beasley led the way with a nifty 30-9-7 line (the 7 assists marking a career high), while rookie Wesley Johnson set a career high with 24 points. Chris Paul, who had 22 and 13 for the Bugs, called it a “bad, bad, bad loss.” He and Kobe can bemoan losses to the Wolves all they want, but I don’t think a loss in Minny is all that shameful these days.

Where have you gone, Brandon Jennings? The continued absence due to injury of one of my favorite players and definitely my favorite Twitterer in the League may be starting to take a toll on the undermanned Bucks, who lost this rematch of last year’s exciting first-round Playoff series. The Hawks ended a five-game road losing streak behind 18 points and 12 rebounds from super-steady Al Horford and 51 percent shooting from the floor as a team, while Milwaukee was done in by a 13-point 4th quarter and just 37 percent shooting as a team.

Nice road win for the Mavs, with one big caveat about each team. For Dallas, the issue is that Dirk Nowitzki limped off the floor early in the second quarter and did not return. He is scheduled for an MRI on his now-sore right knee tomorrow morning. In Dirk’s absence, Jason Kidd did what Jason Kidd does (10-9-10-4), while Shawn Marion notched 20 points and 9 rebounds. Re. the Thunder, while I didn’t watch tonight’s game, I did watch their game with the Knicks last week and a few other games before that, and I don’t know, something just seems funky with them. Sure, they’ll make the Playoffs and Kevin Durant and Russell Westbrook alone will be good for sick highlights and some great wins this season, but they don’t seem one iota better than last year and they don’t seem to be having nearly as much fun, either. Call me super-overreactionary, but I started a Scott Brooks Watch last week, at least in my own mind.

Yes, the game our man Adam was at in person. From what I’ve gathered, snow made the Magic get to the arena late and start the game slowly, while the bodies in attendance were at a minimum. None of the above kept Orlando from heating up in the second half, perhaps inspired by the crazy Gilbert shot right before the half (disallowed but awesome) that Tzvi posted. Leading the way for the Magic, as usual, was Dwight Howard, who had 19 points, 13 rebounds, 3 assists and 6 blocks. A Beast, indeed.

I want to extend a big congratulations to Paul Silas for winning in his debut as Bobcats coach (but not “Charlotte” coach; you guys should remember what a nice job he did with the Hornets). Coach Silas is one of the great gentlemen in the NBA, and the father to Stephen Silas, lured from the Warriors to once again coach under his father. Steve is a real friend of mine, not an industry friend (nothing wrong with the latter, just saying), and I’m happy for him. As for the actual players on the floor—though the one I want to focus on is tied to the coaching change—DJ Augustin scored a season-high 27 points on 10-15 shooting from the floor to lead the Bobcats. There was probably no player forced to listen to more of Larry Brown’s tirades than DJ, so we’ll treat this line as his parting gift to LB.

The Warriors got 20+ points from Monta Ellis, David Lee and Dorell Wright in an easy win over the visiting Sixers, who were led by Jrue Holiday’s 23 points and 11 assists.

The Game of the Night, in closeness if not at all in relevance to the League at large. Tyreke Evans, who had a season- and game-high 32 points, was fouled shooting a three-pointer with 1.9 seconds left (been a lot of these fouled-on-triples lately, it seems to me) with the Kings down three. He made the first two but missed the third, and then missed the putback. End result? The Kings’ eighth straight loss and 22nd in 24 games. Yuck. The entertaining Clips, on the other hand, got 31 points from Eric Gordon and 14 rebounds from Blake Griffin while notching their fifth win in six games.

Hey, I had it Utah over Portland in my rough draft of this piece. Very surprised to see the perpetually banged-up Blazers, who lost Marcus Camby to an ankle injury, win in SLC. Leading the way for Portland was LaMarcus Aldridge, who had 26 points and 7 rebounds. Deron Williams scored 31 to lead the Jazz, who lost their own skinny shotblocker when Andrei Kirilenko left the game with a lower back strain. In an unfortunate coincidence, both Camby and AK are on my fantasy team.

Saw a fourth-quarter tweet from Wizards beat writer and SLAM friend Michael Lee about how last time the Wiz “won a road game, LeBron James was a member of the Cleveland Cavaliers. They’re up 10 with 10 mins left.” Part one of the tweet is still true.

It got a bit overshadowed in today’s sports calendar by the full NBA slate, Monday Night Football and my Arsenal squad putting it on Chelsea, but the Big East kicked off its title chase with the rugged Pitt Panthers beating up on UConn behind 21 points and 7 assists from Ashton Gibbs. My question for Pitt will be the same as it has been since Ben Howland was the coach: can they do it in the NCAA Tournament?

Post-Game: This was more long-winded than I expected. Sorry, or your welcome, depending on how you found it. Commence the conversation!