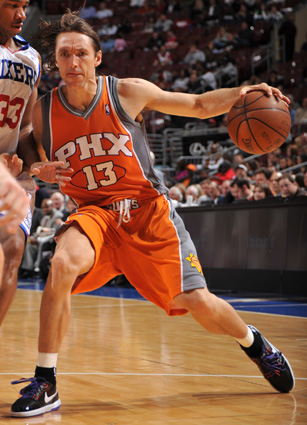 Another day another W for the Phoenix Suns.

It’s like they heard about the praise we were giving them in here or something. I didn’t get to catch the game because Canada decided to show an old Raptors game instead –yeah, wasn’t so psyched about that decision– but the boxscore and tweets about the game told a pretty picture. Hitting 6-for-8 from beyond the arc for J-Rich to finish with 29 points, Jared Dudley coming off of the bench and adding 18, Amare Stoudemire with 17 points and of course, the ridiculous 21-point, 20-assist performance from Nash that came on just nine field goal attempts. With 32 team assists on 41 made field goals, a 7-1 start has the Suns looking really good as they lead the NBA with 109.7 points per game and have Leandro Barbosa back. It’s good to love the Suns.

Because this is the Post Up and most of you will get this, I’m interrupting the flow of this post to mention, Azubuike’s 31 points. Also, the Warriors had 111 points through three quarters. I know the Wolves are shorthanded and all, but damn.

The Jazz were in New York to face the Knicks and controlled the game early on until the fourth when New York came blazing back, outscoring Utah 27-19 and giving the Jazz a scare, before falling just short, 95-93. With the loss the Knicks fell to 1-7. Wilson Chandler had 15 points and 10 boards for New York while Toney Douglas scored 21 off of the bench. Deron Williams had an off-night from the floor, connecting on just 2-for-10 field goal attempts to finish with five points, but he dished 16 assists for his squad as Andrei Kirilenko and Carlos Boozer each scored 23 points, with Boozer also grabbing 14 rebounds. Mehmet Okur had a double-double with 18 and 12 and my undrafted Marquette rookie, Wesley Matthews got 18 minutes in the game, scoring six points.

The Raptors were in San Antonio to face a Tony Parker-less Spurs team and then found out before the game that SA would also be without Tim Duncan. Should have been an easy game for them to steal after getting smoked in Dallas, right? Not quite. Toronto shot 59% for the game, while giving up 48% shooting to the Spurs but still lost, 131-124 as Manu Ginobili was all over the place, finishing with 36 points and eight assists on 8-15 shooting. The Raps got burned badly on the boards, with SA outrebounding them 41-29, including 16-5 on the offensive glass. After letting the Spurs hit a couple beyond the arc, they couldn’t miss, finishing 14-28 from deep. Despite the absence of Parker and Duncan, San Antonio’s efficiency was impressive, with 28 assists to just six turnovers for the entire game. With the loss the Raptors wasted another 32-point, 10-rebound effort from Chris Bosh.

Bosh also hit a three on the night, his sixth make in six attempts this season.

Ugly moment of that game: Matt Bonner not only hit 4-for-8 three-pointers, he also blew by the Raptor “defense” to get to the hoop with the quickness. Really. I’m not kidding. That was a cringe worthy moment.

Oh, quick note: I’ve got to do the Canadian spellings for “defence” and “offence” in my blog over at The Score and I’ve just gotten it ingrained into my head. Of course, now I’ve got to flip it back to “defense” and “offense” over here and everywhere else I write. #theperilsofbeingcanadian

Chris Paul rolled his ankle in the first half of the Hornets game against the Clippers. That made me feel sick for real. Especially the replay. He came back in the third though, and appeared to be fine while Devin Brown had the game of his life. Or, what felt like it, finishing with 25 points as CP3 had 24 points to go with 10 assists and three steals.

And the T-Wolves? Oh Myles. I’m glad this one wasn’t in Minnesota. Falling behind by 19 to the Warriors at the half, giving up 74 points in 24 minutes and then going down by 30 before the midway point of the third? It was ugly, ugly, ugly for Minny in the Bay as the Warriors finished on top, 146-105. Yes, 146.

Scrap basketball (perhaps the only time I will ever say that), I’d just like to see how halftime sessions work for the Warriors. With the players against Nellie, and Nellie against the world –or at the very least, determined to be against us loyal, kind and compassionate Anthony Randolph fantasy owners– the coach’s speech has got to be something night in and night out. Dysfunctional.

Did you catch the shot of Ricky Davis in this month’s SLAM? I almost can’t believe he’s still around, cashing a paycheque and playing basketball. As the player who was the topic of the story that made me commit my life to being a writer (Much love to you, Scoop J!), Ricky’s got a special place in my basketball history.

One more thing: I’m still not used to Ramon Session in a Wolves uni. That trip anyone else out?