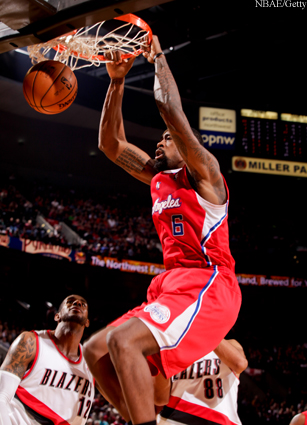 Chicago and Oklahoma City battled back and forth against each other for 48 minutes and put on a great show in the first game of last night’s national television doubleheader. Each team had its moments of greatness and the two squads exchanged the lead nine times. In the first quarter, the Bulls led by eight at one point before OKC came back and tied it up at 24. In the second, the Thunder built a seven point lead but Chicago came back to cut the lead to one at the break. The two teams continued to battle throughout the second half but the real fireworks went down in the fourth and to no one’s surprise, Kevin Durant stole the show. KD finished 11-19 from the field for 24 points and completely took over in the home stretch. After OKC went on a 6-0 run to push the lead to five midway through the fourth, the Bulls rallied and a Rip Hamilton jumper with just under three minutes to go tied the game at 87. After that, it was Durant’s time to shine. In the final minute, the DMV native hit two huge buckets to help carry his team to victory. The first was a baseline one hander over Luol Deng to give the Thunder a four-point cushion. The Bulls scored on the ensuing possession and the Thunder went right back to Durant the next time down the court. KD proceeded to hit a step back jumper from the top of the key à la Dirk Nowitzki to seal the game and give OKC a road victory.

— A tale of two benches: OKC’s scored 29 (including Kevin Martin’s 15), Chicago’s only had 14 and just four in the second half.

— Serge Ibaka had an impressive game with 21 points, 9 boards and 4 blocks. Russell Westbrook had another tough shooting night, scoring 16 points on 7-22 shooting. He also dished out 12 assists.

— Despite his shortcomings defensively against KD, Luol Deng had a solid game with 27 points. Rip Hamilton chipped in with 20 points and 8 boards.

— The Bulls were one of the best teams at home last season but have already lost two at home.

During yesterday’s night cap, the Clippers got off to a hot start and looked as if they were going to blow out the Blazers at the Rose Garden. In the first half, Los Angeles picked up right where they left off the night before against San Antonio and kept their offense moving, finding a nice inside-outside balance and jumped out to a 25-point lead. In the third quarter, the Clippers fell asleep at the wheel a bit and allowed Portland to get back into the game. Los Angeles stopped moving the ball and their offense became stagnant in the half court, relying too much on their guards to go one-on-one or buckets thinking that a young Blazers team would roll over and take the L. Instead, Portland used the energy from their home crowd and began chipping away at the lead slowly but surely. Portland outscored their opponent 32-17 in the third quarter and were able to cut the lead to six heading into the fourth. The Blazers eventually cut the deficit to four but their starters, who play a ridiculous amount of minutes per game, began to feel the burn playing on heavy legs. The Clippers depth got the best of Portland and LA was able to push the lead back to double-digits and coast to their second win in as many nights.

— DeAndre Jordan had zero 20-point games last year. He had two in a row this week. The work he put in during the off-season is really paying off so far, will be interesting to see if he can keep it up.

— Rookie center Meyers Leonard gave Portland a huge boost off the bench in the second half and his dunk all over Ronny Turiaf was a hopeful glimpse of things to come for the Blazers faithful.

— Jamal Crawford led all scorers with 25 and Nicolas Batum led the Blazers with 23.