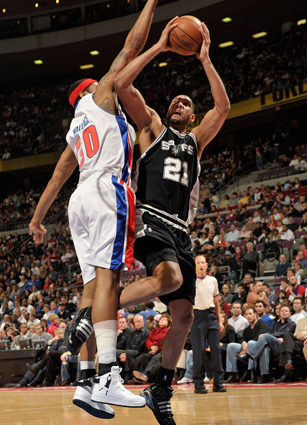 A quiet Thursday last night, but we got lucky and had two good games.

The Detroit/San Antonio match up really turned out to be great. I wasn’t expecting that. Iverson was fantastic. He still looked like someone else out there, though.

I thought the Jazz were going to come out flying,  but it looked like some of the guys forgot to return from All Star break during that first quarter. After shooting 26 percent midway through the second quarter, Jerry Sloan got a technical foul and fired his team up and before we knew it, the Jazz were back.

Scary moment when KG went down without appearing to have any contact on his knee. The official word was a strained knee, but of course, we’ll keep you updated as more info becomes available. While he wanted to play in the second half, the Celtics wisely elected to shut him down for the night.

Thoughts and well wishes are being sent out to KG.

The return of Charles on TNT was great last night. He appeared to have been humbled and greatly touched by the support he has been given. I will just say, when it comes to Charles I feel it isn’t my place to judge, bu to support and pray that he will never again get behind the wheel while intoxicated.

As for the rest of the things that go along with that story, well, I’m not going to begin to judge what he does in his spare time. Instead, I appreciate him for the laughs and jokes he provides each week. Appreciate the honesty he brings to us and to the table and above all else, appreciate him for being a square peg in a round world and bringing something different to Inside the NBA. There is only one Charles Barkley. Let’s hope he never has to again take an absence from the game and gig he loves so much.

I thought I’d have a lot to talk about from the trade deadline, but unfortunately, it was a pretty uneventful day. Pretty lame, for me personally.

I lost Will Soloman from the Raptors and I’m pretty sure I am the only Soloman fan out there besides his family and friends. Be kind to him, Kings fans!

Then, I lost Rashad McCants, who I was supposed to speak with this Tuesday when the Wolves were in town.

Also, Wednesday night, I was unable to speak with Delonte West, as a result of his not dressing. Makes sense, but it killed a story I’ve been working on since January that can only be completed (or completed as I want it to be), with a few quotes from Delonte.

I really don’t understand Houston. Or the Bulls, even. I don’t see Brad Miller with Derrick Rose. Larry Hughes on the Knicks will be interesting to watch, though.

Also, Jameer Nelson underwent surgery on his shoulder yesterday. Well wishes for a speedy recovery are being sent to Jameer.

Okay, on to the two recaps. Enjoy your weekend, everyone.

While Allen Iverson was great in this one, he wasn’t enough for the Pistons. Scoring 31 points to go with 7 assists, Iverson missed what would have been a game-tying three and the Pistons won this one by being solid at the line in the final minutes of the game. While Iverson either scored or assisted on the Pistons final 15 points of the fourth, he rushed a three-point attempt with five seconds remaining and the Pistons down 82-79. Bruce Bowen hit two free throws with nine seconds on the clock despite being only a 47% free throw shooter on the season. Before that, it was Tony Parker to knock down a pair of free throws. Then, with the Spurs up three Tim Duncan hit one of two free throws to put the game out of reach for the Pistons. Duncan finished with 18 points and 18 rebounds, Parker had 19 points and 11 assists and Matt Bonner added 15. Besides Iverson’s 31, Antonio McDyess had 13 and Jason Maxiell added 10 on the night as Rasheed Wallace managed only 4-17 shooting in the loss.

While the Celtics jumped out to in early lead with the Jazz starting the game by being unable to hit a shot, things changed just before halftime. First, Coach Sloan picked up a technical foul that woke his squad up and they came roaring back to go into the half trailing only one, 39-38. Next unfortunately, Kevin Garnett came down with a knee injury that took him out of the game just before the half. While the team called it a knee sprain, he did not return and without him, the Jazz were able to steal a victory against another one of the league’s top teams. The Celtics hung around and threatened late, but were unable to convert extra opportunities down the stretch while the Jazz made the most of theirs. While Paul Millsap struggled early, he was solid late, hitting a shot and taking the foul to convert a three-point opportunity and then Mehmet Okur (19 points) and Deron Williams (18 points and 10 assists), took care of things from there. Ronnie Brewer also added 16 points. The Celtics were led by Paul Pierce’s 20 points, but he was unable to hit them when it mattered. Rajon Rondo had 15 points, Ray Allen scored 12 and Kendrick Perkins added 12 points as well to go with 11 rebounds.