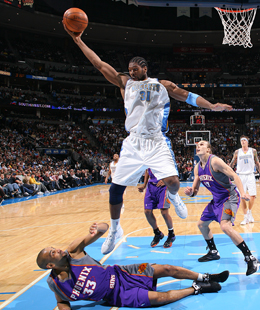 TNT doubleheader giving us two overtime games. It was a great night to be in front of your TV. Hope you guys were present for these ones.

Sad moment of the night: Delonte West colliding with Derrick Rose and winding up with a fractured wrist and stitched-up temple. Not good, Cavaliers fans, not good.

Bron-Weight-Watch: According to Reggie Miller, Bron is 275 pounds. Let’s continue to monitor this as the season goes on, because if this continues he will be at 300 before playoffs begin.

Speaking of weight, there is no way JR Smith is 230 pounds as it was suggested during the game last night. At least, I don’t think so.

Thrilled for Jerryd Bayless and his career-high in Jersey last night. Not thrilled to hear that the Blazers will be without Steve Blake for up to 10 days with a separated right shoulder.

Surprised at how well Brook Lopez has been playing for Jersey as of late.

To be honest, I’m still gushing over Chris Paul’s big night Wednesday. Can you blame me?

Way for Luol Deng to come to life and remind us all he’s a pretty good player, knocking down those back-to-back 3s in OT.

The Denver/Phoenix game was a great one, wasn’t it? Man, it felt good to just sit down and watch

basketball again last night. First the Spurs/Lakers, then that Golden State/ Sac-town marathon and then these two overtime gifts from the basketball Gods?

Amazing thing to think about for the day: Kenyon Martin having microfracture surgery on both legs. Just stop and think about that for a moment. It’s incredible. I’ve professed my love for Steve Hess before, but I will do it again. Love that Denver training staff.

As if on cue, Martin just knocked down a ridiculous three. Unreal.

If I could be greedy though, I’d have wanted to see Balkman out there. Love that guy!

To see me bash my boy Kobe (yes, really), be sure to check out my Court Surfing blog over at The Score. Ugh. Not a fan of that.

Okay, let’s jump into the games.

Well now, I wasn’t expecting this one. Since the Bulls had played in Toronto last night, I wasn’t expecting them to take this one. Actually, I wasn’t even expecting them to really put up much of a fight for the Cavs. How gloriously wrong I was. With LeBron showing that he is indeed, at least partially human and missing his final 12 shots of regulation (including what would have been a game-winner at the buzzer), the Bulls rang off a 16-1 run to end the fourth and dominate the overtime session as they managed to take down a Cavs team with a little help as Delonte West was unavailable after a collision with Derrick Rose at the end of the first quarter. Without West and with a struggling Bron, the Cavs were lost in the overtime and were outscored by the Bulls 15-6 in the extra session. Luol Deng led the Bulls with 22 points, including back to back three’s in over time, as Rose finished with 16 and Tyrus Thomas added 15. LeBron James led the Cavaliers with 28 points, 14 rebounds and 7 assists, not bad for a guy who was struggling. Mo Williams added 26 points and Delonte West had scored 10 before his injury.

While the Nets were excited to be back home after a 32-point drubbing in Boston last night, they were not excited at having to guard Brandon Roy and the rest of the Blazers. With Roy dropping in 29 and rookie Jerryd Bayless scoring a career-high 23, the Blazers shocked a Nets team with a 37-point fourth quarter to come back from 11 down in the second half, take control of the game and get the victory one night after being blown out in Philadelphia. Bayless was given an opportunity to shine in the absence of Steve Blake who was injured in the game against Philly. LaMarcus Aldridge also scored 20 for the Blazers and Travis Outlaw added 13. Devin Harris led the Nets with 23 points and 8 assists as Brook Lopez continued his strong play with 17 points and Vince Carter scored 13 points, grabbed 9 rebounds and had five assists in the loss.

Despite a strong opening quarter that saw the Suns go ahead by double figures, they could not capitalize in a game where the Nuggets were still without Carmelo Anthony. Thanks to a Nuggets push in the third, the two teams went into the fourth tied and while they traded baskets in the final minutes, it was a three from JR Smith (starting in place of Anthony, and coming up huge with 19 points), tying the game at 103, that would be the final basket of regulation. Into overtime and Chauncey Billups made the Suns pay. Scoring the first two baskets for the Nuggets, Billups put his team ahead and they didn’t look back. Kenyon Martin was huge in the extra session as he knocked down a clinching three-pointer to beat the shot clock and put away the Suns. Billups led the Nuggets with 26 points and 8 assists as Kenyon Martin had 25 points and Nene has 17 points to go with 14 rebounds. The Suns were led by Steve Nash’s 20-point, 10-assist double-double as Grant Hill had 25 and Amare finished with 21.