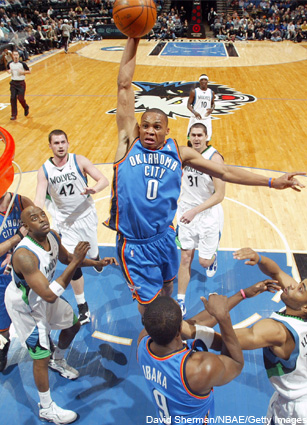 And another Monday is upon us, bringing us one week closer to the postseason. Crazy how All-Star break kind of breaks up the season and when things pick up after it, everyone seems a little more aware of standings and records and the true importance of each and every road trip/game/half/possession.

Chris Bosh admitted that he checks over the schedule and standings every couple of days after the All-Star break. Everything is just a bit more meaningful. And it makes for great competition.

Yesterday we had over 12 hours of NBA action, tipping off on ABC with the Magic hosting the Cavs. It went down to the wire before the Magic were able to close out Cleveland 101-95, handing the Cavs their third straight loss after reeling off 13 straight. Vince Carter was huge for Orlando down the stretch and Dwight posted serious numbers, finishing with 22 points, 16 rebounds and four blocked shots, enough to negate the 33-point, nine-rebound, six-assist effort from LeBron James. After going 0-for-12 in his Cavs debut, Antawn Jamison had a much better game Sunday, finishing with 19 points and eight rebounds, still it wasn’t enough.

In the second game on ABC, the Celtics took on the Nuggets in Denver and, wow, are they trouble at home. Flying out to an 18-point lead at the end of the first quarter, the Nuggets ran circles around Boston and are pretty much unstoppable in transition. Nene is a monster inside and he needs to get the ball. He’s shooting such a high percentage from the floor, it only makes sense to make sure he gets his touches. Of course, Boston settled into a rhythm and turned the game into a half court affair, coming all the way back in the second half, before George Karl got his Nuggets to get back to playing their game.

In the fourth, the Celtics defense kicked it up another notch, but it was too late and the Nuggets came away with the 114-105 victory, led by Chauncey Billups’ line of 26 points and seven assists. Melo added 23 points and tied a career-high with eight assists and JR Smith added 19 off of the bench. Ray Allen continued his strong play with 25 points. Good thing the Celtics didn’t trade him because he’s been the best Celtic in the past few games. Another positive for Boston: KG looked really good yesterday afternoon. He was active and very aggressive. Good to see.

In Minnesota, the Thunder continued rolling, owning that 5th spot in the Western Conference with pride. Pulling out the 109-107 victory, Russell Westbrook dropped the triple-double with 22 points, 10 rebounds and 14 assists as Kevin Durant poured in 32 points and Jeff Green added 17 points and 14 rebounds.

Can you honestly tell me you actively root against the Thunder? If they are playing against your team, fine, but if not, I don’t think I’d want to be friends with someone who can’t see the awesomeness in the Thunder. So much fun.

Quote of the night had to be this gem from the out of shape Darko Milicic – “I was trying to focus on breathing. I was just focusing on breathing so I didn’t die.”

In Portland, the Blazers lost a tough one to the Jazz in overtime, falling 93-89. After leading by as many as 25 in the third quarter, Portland fell apart in the fourth, scoring just 10 points as the Jazz came racing back, forcing overtime on an offensive rebound –Boozer’s 21st of the night– and putback from Boozer. In the extra session, the Blazers offensive continued to stall and they lose despite having Brandon Roy back for the second consecutive game. Roy finished with 23 points but missed what would have been a game-tying three in overtime. He’s back, but he still doesn’t look right and it makes me nervous watching him play, particularly when you see him grabbing onto his leg to try and soothe that hamstring. Yikes.

Boozer was awesome in this one, scoring 22 points and grabbing a career-high 23 rebounds, none bigger than the one to force overtime. The Blazers connected on just four of their final 27 attempts from the floor and were unable to hang on for the win against a Jazz team that was without Mehmet Okur and lost Andrei Kirilenko in the first half due to back spasms. Marcus Camby had 18 boards, but only two points for the Blazers.

Heartbreaker. I felt for the Portland fans in that one!