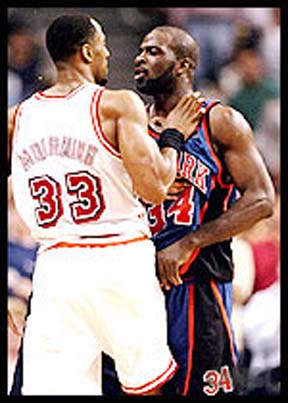 When the news dropped a month or so back that 43-year-old power forward Charles Oakley was mulling a comeback, I was horrified. Oak was wholly ineffective in his last NBA go-round with the Rockets, so there was no reason to believe he’d be any better three years later. Then I read that he would only come back for something like $10 million over two years. Whew. Obviously the whole thing was a joke all along.

However, if Oak is still interested in being an active part of the NBA (and apparently he is, as he’s taken a position with the Charlotte Bobcats), I have another suggestion for him. A position that he would no doubt enjoy.

NBA Commissioner of Punching People in the Mouth.

Now, when I originally thought up this position a couple of days ago, I had Chris Childs in mind (mostly because of this). But our very own Tarzan Cooper suggested Oak as a better choice, and I wholeheartedly agree. (Oak’s résumé is impeccable, and his references, Tyrone Hill and Jeff McInnis, checked out.)

I see Oak as being a special assistant to David Stern—an effective version of Stu Jackson, the Dutch Schaefer of the NBA—traveling wherever and whenever to dispense immediate punishment. Ron Artest went where? CRACK. Isiah Thomas called his subordinate what? POP. Andrei Kirilenko dissed who? SLAP. (Whether said punishment is delivered by closed or open hand would be left entirely to Oak’s discretion.)

Like the man himself once said, “if it ain’t broke, I’m fixin’ to break it.” The NBA: Where Charles Oakley Happens. I like the sound of it already.