The Rise of Scottie Pippen 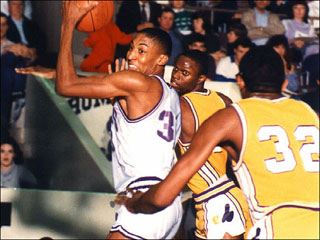 Increasingly rare and precious indeed is the not-sure-thing player, from the not-sure-where-that-is school, who turns out to be the missing piece in your favorite team’s championship puzzle. More rare, even, than the sure-thing prospect—from a school seen nightly on SportsCenter—who as a rookie LeBronizes the League every decade or so.

Any franchise can snag the latter on NBA Draft Night with the dumb luck of a lottery ball bounce. It’s the franchises which identify, plot for and get the latter that in the long run separate themselves from the pack.

In 1976, Seattle snagged Dennis Johnson, who in high school wasn’t even good enough to play more than a few minutes a game. In his second pro season, he led the SuperSonics to a Championship. In 1986, Detroit gambled on NAIA star Dennis Rodman, who never got on to the floor as a high schooler and at age 22 appeared to have washed out of competitive basketball altogether. Fast forward a few years: Rodman’s a borderline star and vital contributor to the Pistons’ first two titles.

Of all stories in which a player swings from utter anonymity to eventual superstardom, the most celebrated belongs to Scottie Pippen. The first-ballot Hall of Famer entered college not on an athletic scholarship but with a grant to work as the basketball team’s manager. He majored in industrial education, assuming his future was in factory management. After two summers of welding work in furniture plants that left him burn marks on his arms, Pippen decided basketball held more promise than he’d originally assumed.

Within seven years, the would-be factory manager was churning out the first of six world Championships, seven All-NBA selections and 10 All-Defensive Team selections. But, like his running mate Michael Jordan, Pippen has left a complex legacy as a great player on the court with questionable behavior off of it. At least three times early in his career, Pippen was cited in police reports for domestic abuse. On Sunday, he was involved in a fight outside a sushi restaurant in Malibu. The other person suffered head injuries and was taken to a hospital, where he was treated and released.

It’s hard to reconcile reports of this Pippen—posh, violent and impetuous—with accounts of the shy boy from rural Arkansas who toiled in obscurity for years. Pippen has been in the national limelight for 26 years, and it seems as if we hardly know him any better than when he first burst on the scene in the 1987 Draft.

If not for a stunning growth spurt, he likely would have stayed anonymous.

Like Rodman and Johnson, Pippen physically underwhelmed in high school. At 6-1 and 150 pounds, he didn’t consider himself to be a much of basketball prospect. As a junior, he skipped an off-season conditioning program to be an equipment manager for Hamburg High School’s football team. He only became a starter as a senior.

“He was a good role player, but we certainly had better players,” Hamburg basketball coach Donald Wayne told the Arkansas Times in 1988. “In fact, I coached three of Scottie’s older brothers here, and at least one of them, Jimmy (who now works for a supermarket in Little Rock) was a lot better high school player than Scottie was.”

Still, Wayne saw enough in Pippen to think the point guard could contribute to a small college program, even if no recruiters had shown the slightest interest in him. Wayne put in a call to his former college coach Don Dyer, who was then coaching at the University of Central Arkansas in Conway. Wayne “had it in his mind that basketball was the way I would get an education,” Pippen told Sports Illustrated in 1987.

Dyer wasn’t thrilled with the prospect, but, as a favor, took Pippen on as a manager. Pippen’s initial job was to serve water, tape ankles and gather laundry but he also got to practice with the team, then part of the National Association of Intercollegiate Athletics. When two UCA players quit at the start of the ’83-84 season, Dyer put Pippen—who’d grown to 6-3—on scholarship and added him to the roster. “He was real gangly,” Dyer told the Arkansas Times. “The coordination just wasn’t there yet, but you could see underneath that even then he had the skills.”

Pippen played sporadically as a freshman, averaging only 4 points and 3 rebounds, but by season’s end had grown another two inches and had packed on muscle through weight lifting.

Pippen emerged as the team’s best player as a sophomore even if he couldn’t much show it during games. Poor grades took that season’s first semester away and in his first game back, Pippen injured an ankle and was hobbled for much of the season’s remainder. Still, he averaged 18 points and 9 rebounds and at 6-7 and nearly 200 pounds had started playing all positions.

In the summers, Pippen worked out on campus with his best friend Ronnie Martin and competed in Little Rock’s Dunbar Community Center league, Dyer recalled. There, he played with some of the best Arkansans of the era, including Milwaukee Bucks star Sidney Moncrief. “He just kept getting better and better,” Dyer said in a telephone interview. It became clear Pippen had legit NBA potential.

So, Dyer started sending film of him to organizations. Footage went to Dyer’s acquaintance Bob Bass, then the San Antonio Spurs’ general manager. Dyer was surprised the Spurs didn’t reply. “We were just trying to get [Pippen’s] name out there, but nobody paid attention to him.”

Such anonymity persisted through Pippen’s junior year, in which he led his Arkansas Intercollegiate Conference in points (19.3 ppg) and rebounding (9.2 rpg) and earned the first of two consecutive NAIA All-American selections. “We spent that year and the next trying to tell people we had the best basketball player in Arkansas at UCA, bar none,” Dyer told the Arkansas Times. “But if you’re not at Fayetteville, or to a lesser extent Jonesboro or Little Rock, it’s hard to get anybody to listen to you.”

In Pippen’s senior season, UCA assistant coach Arch Jones apparently took it upon himself to ensure his young star got noticed. He’d read an article about NBA superscout Marty Blake, who had a track record for finding off-the-radar talents which he’d bolstered by scouting Rodman at Southeastern Oklahoma State University.

Jones recalled nearly 25 years before he’d run across Blake’s name attached to flowers sent to Arkansas Tech, where he’d played college ball. In 1961, Blake was scouting Jones’ Tech teammate JP Lovelady for the St. Louis Hawks. Blake thought he’d found “the next Jerry Sloan,” the hard-nosed 6-4 guard from Illinois, and expected to sign Lovelady at the Hawks’ training camp. Tragically, Lovelady died in a car accident before he could participate.

In 1986, Jones cold-called Blake, introduced himself and told him Pippen was worth checking out in person. “In December of Pippen’s senior season, Blake ventured to Hattiesburg, MS, where Central Arkansas played Southern Mississippi, to see for himself,” according to a 2010 Chicago Tribune article.

“Before Pippen finished scoring 24 points while playing all five positions that night, Blake had begun figuring out how to add him to the prestigious Portsmouth Invitational Tournament that, in those days, served as a four-day NBA job interview.”

Blake got him into that post-season showcase among others, but in the meantime tried to elicit more interest from NBA personnel as Pippen put up 23.6 ppg, 10 rpg, 4 apg while shooting 58 percent from the three-point line during his senior year.

Chicago’s general manager Jerry Krause became interested. In February 1987, he dispatched his assistant Billy McKinney to UCA for a game against Henderson State, according to Sports Illustrated.

“Officials at Central Arkansas had been told that Blake was urging all NBA teams to see Pippen play that night. “The people in Conway were expecting this horde of people from the pros,” McKinney says. But the invasion never materialized; McKinney was the only scout to show up.”

Eventually, in the next months, scouts from a few other teams including Boston came to Conway. Likely, they had the same doubts as McKinney. How to accurately gauge Pippen’s true ability when the competition—which McKinney likened to “amateur night at the Y”—was so lousy?

The scouts’ suspicions wouldn’t be soothed until April, when Pippen traveled to Virginia to play in the Portsmouth Invitational Tournament against future first-round selections. His versatility, athleticism and length quickly made a big impression on Krause, who finally saw him in person. “He had the longest arms (6-10 wingspan) I’d ever seen,” Krause told the Chicago Tribune in 2010. “That night, I got very excited.”

He wasn’t the only one.

Blake recalled Pippen had been so impressive that by the end of the first day, 50 colleagues approached him in the stands to shake his hand. Pippen kept it up, dominating two more post-season showcases for college seniors.

Still, he wasn’t exactly a known commodity among his major college counterparts. For instance, not until two weeks before the 1987 NBA Draft did Georgetown’s Reggie Williams (the eventual No. 4 pick) first hear Pippen’s name, according to SI.

Pippen’s quickly rising stock made it unlikely he would still be around for the Bulls’ first pick at No. 8, so Krause swung a trade with Seattle a few hours before the Draft began that gave Bulls center Olden Polynice to the SuperSonics for Pippen, who was taken by Seattle with the No. 5 selection.

In the span of six weeks, Pippen had risen from likely second-rounder to a lottery pick who reportedly signed a six-year contract worth more than $5 million including incentives, according to SI.

It was the culmination of an improbable run for Scottie, the youngest of 12 children raised by a paper mill worker in Ashley County. The son of the Arkansas Delta was now headed for the bright lights of Chicago.

Decades before, the family of Ashley County native Joe Jackson had also moved to the Midwest, setting into motion a series of events leading to a pop cultural phenomenon in the 1970s and ’80s that centered on his son Michael Jackson.

Pippen, of course, joined another MJ in the Rust Belt. Together, they sparked a cultural phenomenon all their own.

This article was originally published on Sporting Life Arkansas. Demirel covers more basketball from a mid-South/British slant at his blog and Twitter home.